With this bout of scratches I flip-flopped for days about having the vet out. The topical I was applying  this time (4 combined OTC ointments: desitin, clotrimazole/miconazole, triple antibiotic, and an anti-itch with hydrocortizone) were working amazingly for Q. The scabs shriveled to nearly nothing, the bugs didn't get in, the yucky smell associated with fungal/bacterial infections went away, and the inflammation died down and disappeared. SO much improvement in two or three days time!

However, those tight scabs were still ouchy to the touch and with a mare who is the Queen of Anticipation and also the Queen of Overreaction, things quickly boiled into a VERY pissed off horse when you'd try to treat her. Her evasion games escalated to a new level and my relationship handling her rocketed downhill FAST.

So I said bye-bye groceries (for me) and had the vet out so we could sedate her and get those scabs off and maybe take a biopsy. However, after discussing things at length with my vet, we decided to not do a biopsy (yet). Q clearly responds VERY WELL to the topicals I've been using of late, and my vet discussed all of the other skin issues she's seen with horses and other livestock at length with me, too, so I could better grasp what Q didn't have.

We ultimately decided to try out some new supplements into Q's diet (primarily flax/omega 3s; perhaps some other things later as my vet wanted to do some research on her own first to see) to help her through future things, and then we'd sedate and get the scabs off. Vet agreed that the topical ointment combo was doing a really bang-up job of treating Q. She suspected the hydrocortisone was playing a huge part in that, and recommended that I just keep doing my OTC routine instead of purchasing anything extra from her.

Queen of Anticipation and Overreaction was SO worried about us just walking around her and LOOKING at her legs (we hadn't even TOUCHED them yet and she was dancing away from the apparent lasers our eyes were shooting at her), that when Vet went to sedate her she was too tense to be able to inject the solution (Q didn't quake at the needle going in multiple times, just chose to stand with a tense, unmoving neck). Mare, come on. So we coaxed her down enough to finally deliver the sedative. 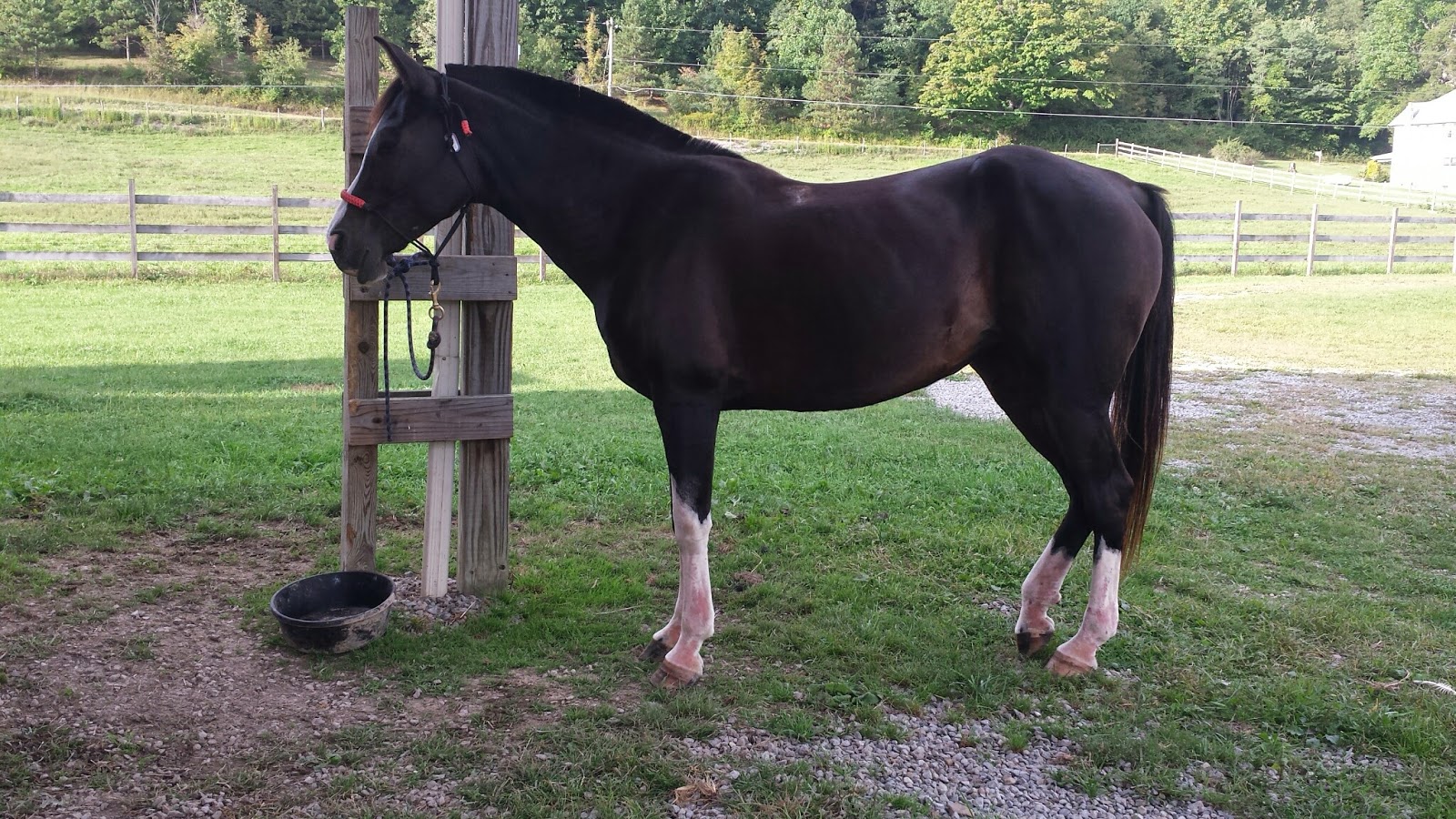 All in all, it took 3 doses of sedative, a lip twitch, and a blindfold (this was the cherry on the whipped cream because Q is SO visual; she'd worry about me going NEAR her and start reacting before I could even get close; with her vision blocked she just stood quietly) for me to be able to shave off those scabs!! And she would STILL kick out at me some. Elephant in a 14.1hh pony body, I swear.

Getting the scabs off - though painful - results in Q healing within 3 days. Every time we've dealt with scratches this summer, this has been the case. New pink skin within 3 days of scab removal - provided I keep her legs washed daily and reapply some sort of topical to manage whatever stage we're at (may need steroid plus other stuff, or may just need something to help keep that skin soft and healthy and keep the bugs off).

So we're back to healthy looking legs for the most part.

Vet agreed with me that Q likely has always been very prone to scratches and it probably just depends on the pasture she's in (this time it was triggered by the back pasture). Vet noted a few key things from her personal experiences with bad scratches cases like this:
Vet also noted that it appears Q may just have some general allergies to the environment overall. I asked, "What does this mean for me managing her?" And Vet laughed and said, "Nothing you want to hear!" But ultimately, Vet recommended getting Q on the flax as she has seen some remarkable differences in animals on it vs. not on it. We may add some other supplements with time (vitamin E and selenium), but Vet wants to see how Q responds to the flax first. Vet seemed all about trying to battle whatever we can with dietary supplements and minerals before we consider medications/steroids, something I'm super on board with, too!

In regards to the residual behavioral effects from this bout of scratches, it's been quite a process. We expect Q's issues with having her hind legs handled stems from her sensitive skin that is prone to scratches.

When Mary was here helping me treat Q, she noted that Q is definitely not responding to pain for much of her outbursts. She's clearly anticipating something happening and reacting to try to prevent it. One of our terrific local farriers and another boarder even watched me with Q the day or two prior to Mary coming and were astounded at Q's violent reactions to someone merely approaching her back legs. She's clearly had some really, REALLY horrible trauma with someone handling her hind legs at some point and is having some sort of flashback reaction due to the recent bout of pain.

The big key for regaining Q's trust of late with having her hind legs handled has been a blindfold. That blindfold goes on, her whole body relaxes significantly. While she still may waggle a leg around to try to evade, when you start gently wiping on that cool ointment, she relaxes the leg and rests it on the ground as if to say, "Oh? That's all? Well, that's not so bad." Taking away her visual really helps to dull her acute flight instinct, which is stronger in her than almost any horse I've been around.


Preventative Measures for the Future

For the future, I'll be following a strict protocol of:

It's A Lot of Work

But by keeping up with the routine I will hopefully prevent future bouts of scratches that require veterinary intervention and harm the level of trust I build with this horse.And besides, if you keep up with a routine for long enough, it becomes pretty easy!

Beyond the monetary expense of having the vet out to help with treatments is the trust expense that happens when Q has to deal with that level of pain. Her trust in me was at its highest ever before this recent bout of scratches. So far, fortunately, that trust is only impacted in our ground handling and not our under saddle work. I'm thankful for this because I've been working really hard to get to a higher level of trust with US work. However, lack of trust with ground things is a huge inconvenience because Q had just reached a very high level of trust for me and things we'd do from the ground. Having the slate wiped nearly clean is hard! We're starting to gain it back, but it will be some time before I can handle her legs - especially the hinds - without her worrying excessively.

We'll get there though. Time and patience.
Posted by Liz Stout at 10:37 AM