Treatments and Another Surgery

I've been sitting on this for awhile, waiting for all the pieces to fall into pace before sharing...

Things have been a bit up and down in these parts with regards to Q and Kenai.

At the horses' annual vet exam last month, Q didn't look great. Neither of my horses came out of winter very well despite being blanketed nearly the whole time to help them keep their calories for weight instead of shivering them off. (There is currently no shed or shelter.) I think it had something to do with the hay quality this year - none of the horses liked it. Q, despite being the resident piggy always at the hay no matter what, especially looked lackluster. Even my vet noted the difference and said something at the exam. 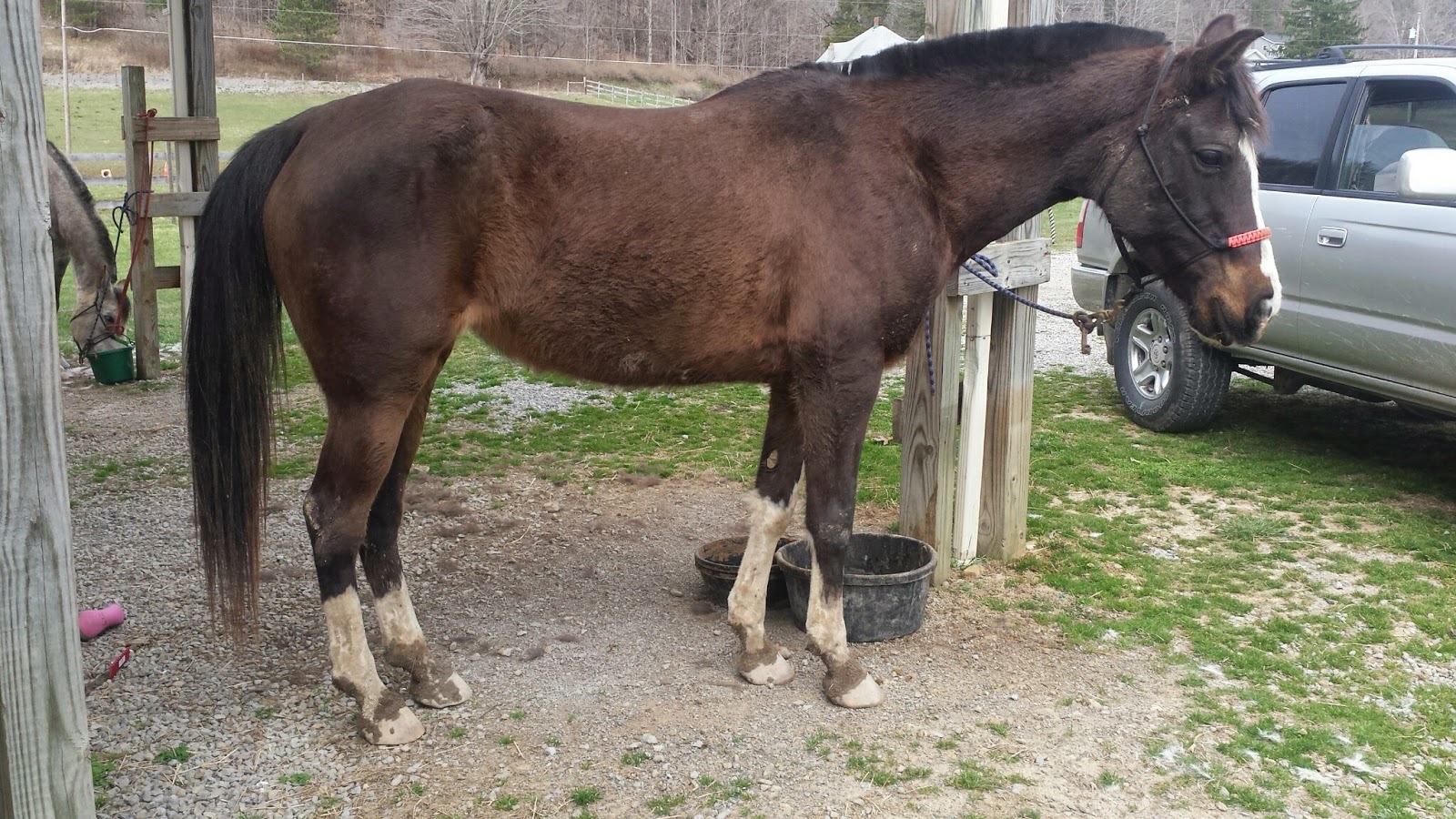 Q's coat was dull, her attitude was muted, she had a slight cough, and overall, she didn't seem completely herself. She received an injection of Excede at the appointment and I ordered Safe Guard Power Dose that night to administer over five consecutive days. As if that wasn't enough, the eye exam showed some irregularities to her left eye. Further investigations led to the conclusion that she has uveitis in this eye. My vet noted that the cyclical nature of uveitis is likely why, despite multiple observances last year, we didn't notice it; it will flare up for a time and then fade away and show no symptoms. During flare ups, my vet said horses may experience a kind of migraine-like pain. While sad to find out, it is good to have the last piece of the spooking puzzle in place to explain Q's behavior over the past year.

Fast forward several weeks to now: Q is doing 110% better. The power dose and excede did their job and she looks brighter, happier, and heftier by the day. The spring grass doesn't hurt either! Additionally, her eye is looking better than it has in ages, too, the slight inflammation is gone and the little bit of drainage  from the corner is gone, as well. I shared about the absolutely outstanding ride I had on my girl a week or so back; that was post treatment from all of the above. I am happy to finally be doing so right by her and moving in a great direction. 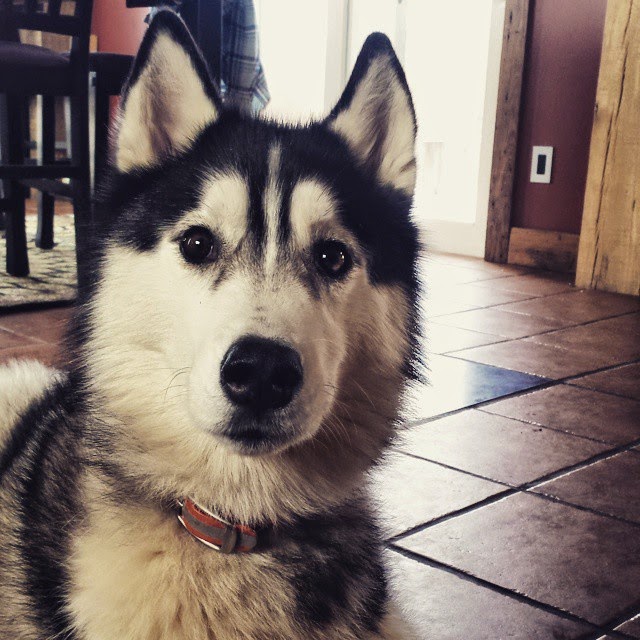 Kenai hasn't been quite right since November 2014. I thought he'd retorn his groin on his right side and put him into limited activity status. I've been through so much lameness with him that my first reaction is to just limit his activity and keep him quiet. I figure most vets would recommend as much as a first shot at fixing the "problem". He certainly wouldn't get any worse doing next to nothing.

I tried time and again to slowly bring him back into some exercise, but each time, he didn't make it past a week or two before regressing. By January, I threw in the towel and decided it was time to head to the vet.

At the vet's, x-rays were taken and Kenai was diagnosed with a fractured fabella - a small sesamoid-like bone behind his knee. It is surrounded by soft tissue (ligaments/tendons) and is where the lateral suture from his knee surgery was blindly anchored 18 months prior. It seems he somehow exerted enough pressure to pull the suture through the fabella? My vet had never seen it and had to call other professionals to consult. I was very against surgery at this point though and really wanted to see if I could keep his activity super limited. So I picked up medications for the pup and headed into two months of nearly no activity.

Unfortunately, at the horse's annual exam (Kenai and Griffin and Q all see the same vet), my vet was not pleased with Kenai's progress at all. There was some swelling and fluid in the joint she told me, upon palpation of the area. She wanted him to come in for digital x-rays later in the week. He shouldn't be this lame after so much time doing nothing. 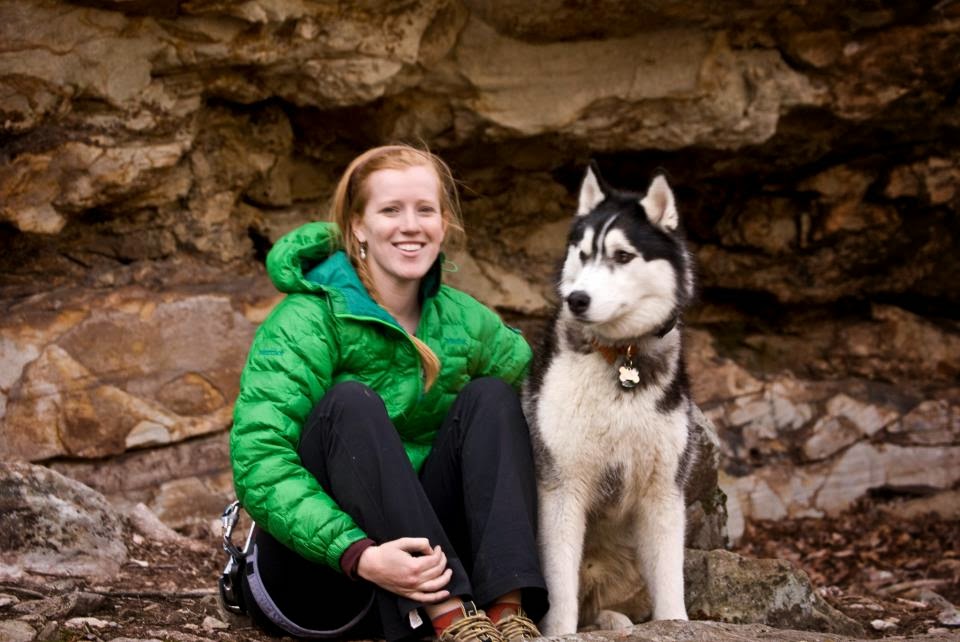 Digital x-rays a few days later showed that the fabella didn't seem to be fractured. Or, if it had been fractured, it had healed. If the bone had been fractured, it likely wouldn't have been in its proper place, but there it was. Kenai's knee, as a whole, was very unstable though. Additionally, there was more arthritis in the knee than there had been previously. Through discussion with orthopedic specialists about the digital x-rays, Kenai was diagnosed with what was very likely a meniscal tear, and perhaps failure of the lateral suture from the first procedure.

The only answer to help Kenai now is surgery.

And so, Kenai is scheduled to go to Virginia Tech next week to be operated on by an orthopedic specialist. Ultimately, it is hard to say what they will find until they open the knee up.

I'm discouraged and heart broken for my guy. Two (kind of three considering his first surgery was on the cruicate ligament in BOTH legs in 2013) major surgeries in as many years. It is incredibly unfortunate and uncommon to see such things in such a young dog.

To try to be able to afford this surgery, I've completely scratched my ride season - it was the biggest thing I had planned for myself this year as I don't have any major vacations out of state planned. I simply cannot afford to take Q to rides and pay for Kenai's surgery. No endurance for Liz - at least on my own horses driving my own rig. If I ride at all, it will be catch rides on others horses and only if the entry fee is covered and the ride is a short drive away.

Unfortunately, the sacrifice to scratch all of my ride season plans only frees up about a third of the money I need for this surgery. The remainder? Well, I'm having to put pride aside and ask for help.

Kenai gets more likes on social media than anything else I ever post. Others seem to adore my adventure partner as much as I do. Kenai is definitely a lucky pup. He hit the doggy life lottery with me - he's got a rich life of adventure at the climbing crags, on the ski slopes, traveling the east coast from Atlanta, GA to the Great Smoky Mountain Nat'l Park, NC/TN to Bar Harbor, ME, and hiking along with me through the Appalachians of West Virginia whether I'm on foot or on horseback.

Long time readers are sure to have seen many a post about this pup in the past many years that I've blogged, and many others have been able to follow along on Kenai's various adventures since. Kenai has been with me from the very beginning of the blog - Q, Griffin, and the cats came long after.

Saiph has generously set up a GoFundMe page for Kenai HERE.


If you're so inclined to donate, please know that I am forever grateful and thankful. Any little bit helps. I dearly want to get my adventure buddy back on the trail, at the crag, and on the ski slopes with me. 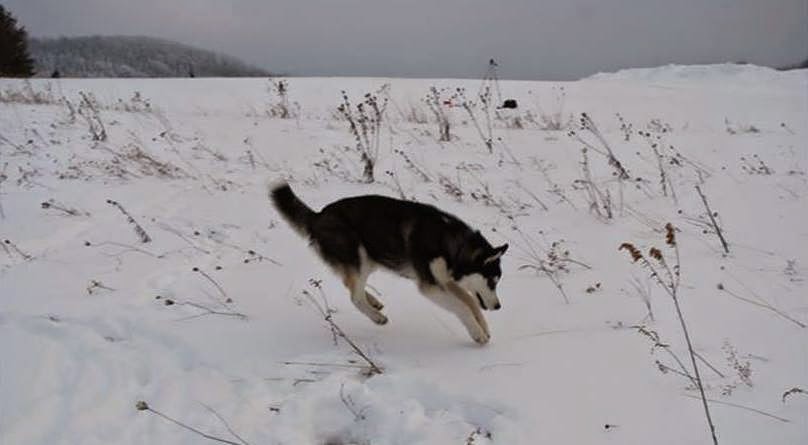