As ski season came to a close this year, I swore to myself (as I do every year) that I would keep in shape through the summer so that my ski legs didn't wither away to nothing. See, I come out of ski season with some pretty baller legs every year. But then summer arrives and I just don't keep things up as I should.

This year I swore (again) to myself that things would be different!

I've tried time and time again to get into running, but ultimately I break down and can't do it any more. Typically, my weak ankles (injury from my competitive swimming career) are the culprit. If I don't break down, I simply slack off and quit simply because I do not enjoy running much.

However, with great influence from reading about fellow bloggers' running pursuits, I was more motivated than ever to get out and give it a go. Reading others detailed accounts of their fitness pursuit, I decided to give it a go..again. I decided I would take it slow this time and only run a few miles at a time and build up slowly. You know, like training an endurance horse.

I was doing great. I logged 21.7 miles in March. Most of my runs in the 1.5 to 3 mile mark. I never felt sore. My cardio improved. My mentality improved. One morning I completed a nearly 5 mile run before 6am and even that run didn't bother me much - just mild soreness. Hurrah!

Encouraged by the 5 miler success, at the very the end of the month I ran 10 kilometers. That is more than I have ever run in one sitting before. I didn't even stop and walk during it! I felt GREAT nearly the entire run. I had some issues with my mental game a little bit, but beyond that, I felt awesome. I was so thrilled. I thought I'd finally figured it out. I decided I would try to do two "long" runs like the 5 and 6 miler every month and keep the rest of my running pretty short.

Except I came up lame a day or two after the 6 mile run. My right foot more than my left, but both were unhappy unless I was in a shoe with a stiff, inflexible sole. Diagnosis? I'd bruised my metatarsals. It seemed to be a common enough injury due to inadequate footwear / doing too much too soon. My shoes are not new. Very, very far from it. But, with Kenai's surgery (pre-saga) looming in the near future, I couldn't exactly afford new shoes yet. And besides, I felt I needed to justify to myself that I was going to stick with this running thing for real before I dropped lots of $$$ on shoes.

I took two weeks off from running, my feet felt better, and then I gave it a go again. I ran a mile with minimal pain, then called it quits to be conservative. By that afternoon, I was regretting running at all. The pain was back. Fortunately though, it went away a lot faster (24 hours). I took another two weeks off all the same and then tried running on soft ground (a hay field) a couple times. I had no more pain.

I found myself very discouraged despite this. Once again I'd tried running and been thwarted. I just didn't really care to keep trying at something that had a history of breaking me. Why try so hard to enjoy something I simply didn't gain a lot of pleasure from? It wasn't worth it.

Still determined to keep my legs in shape and pursue cardio, I pulled my hardly-used mountain bike out and sent it to the shop for a tune up.

As you know, I spend my weekends in Canaan Valley in Tucker County, West Virginia. This area is chock full of some of the best (and gnarliest) mountain biking trails in the country. Many of my fellow patrollers bike during the warmer months, so there was a positive influence around me to get involved in a sport I'd never truly tried. 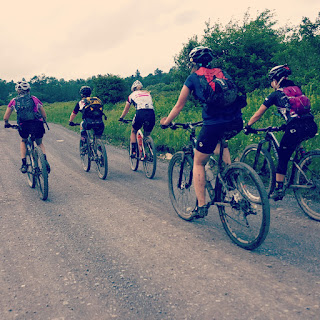 I was totally and completely blown away by how much I LOVED it after only one outing. The trail obstacles on that first ride were a bit terrifying (narrow boardwalks, rock gardens, etc.), but I loved every minute of it despite that. I fell off my bike two or three times (once I swear it bucked me off like a horse!), but I still had a blast. And admittedly, I loved finishing the ride covered in mud and sweat. (Worth noting: my first official outing was during a thunderstorm. Rain be damned, I wanted to give it a go.)

The technical trail consumed every iota of my focus. Gone were any worries I may have had about the world and the rest of my life. All that existed while I was spinning my legs was that moment, the trail, my bike, and me.

I've logged nearly 60 miles on the trail since May. My bike handling skills increase with every ride, as does my fitness and my comfort level on different terrain. I am having so. much. fun. 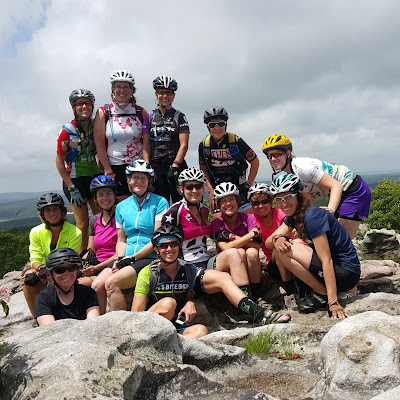 Last Friday (thanks to my dad who found the clinic and paid my entry fee), I took part in a women's mountain bike clinic where I received one on one instruction to help me fine tune my bike handling skills. I learned new skills, as well, and all in all had an absolute BLAST. I even climbed >1,200' on my bike traveling >12 miles that day!

The video above is a series of four "pumps" set up on an incline. It is much steeper than it appears. I'd never done anything like that prior to the clinic. Additionally, the photo above the video is the group of ladies I rode with in the afternoon. My mother is in the bright blue; she kicked ass all day doing something she hadn't done before (she is an avid biker racking in 50+ miles a week, but not on trails).

I'm in better shape right now than I have been in a very, very long time. While often bruised, my legs are definitely in outstanding shape. My horseback riding has improved as a result, too. It's awesome. I love having yet another passion to round out my fitness pursuits.
Posted by Liz Stout at 9:30 AM

- 2006 bay mare with a blaze and 4 stockings
- ½ Morgan, ½ Arabian
- 14.1hh
- Entered my life on May 29, 2012
- Competes in endurance riding, loves her herdmates, and is remarkably even-tempered in chaotic environments like parades

- 2010 grey gelding with 2 stockings and 1 sock
- Grade
- 15hh
- Entered my life on January 28, 2012
-Competes in eventing, loves to jump, has an insatiable need to please, and is the first horse I have raised from the ground up

- Siberian husky born March 5, 2010
- Became my adventure partner on May 11, 2010
- Has great off-leash recall and is easily one of the best off-leash huskies there has ever been
- Loves car rides and going everywhere I go be it a trail ride, bike ride, hikes, the office, or rock climbing; he is great with children to boot!

- Siberian husky born August 29, 2017
- Became my adventure partner on November 24, 2017
- Currently in training to be just as awesome as her older brother
- Loves people, food, running, and being active.