Let's try this cat thing again, shall we? Nymeria, much like her namesake, has disappeared into the wilds. Whether she's heading east to where she came from, is lurking hidden in the neighborhood, or has been eaten by a coyote, I'll probably never know. But one thing is certain, my barn rodent population was getting bolder and bolder with the absence of a cat. And so, on February 12 I brought a new one home. 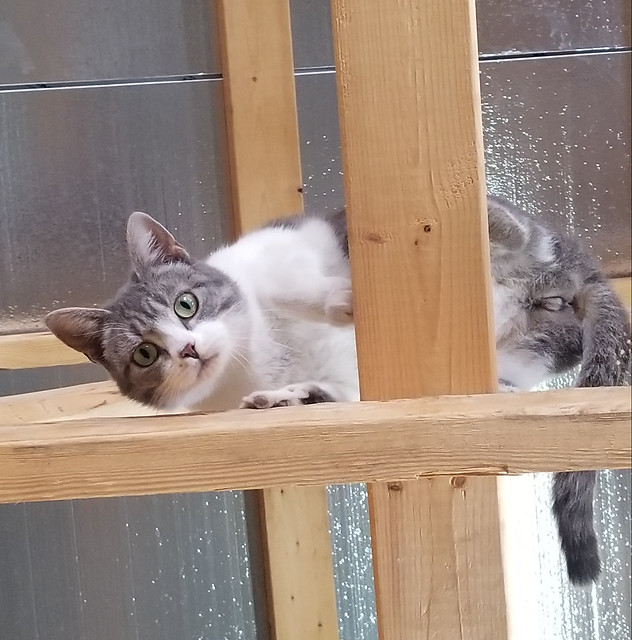 She's 3-4 years old, spayed, and domestic. So none of this running off BS. In fact, she even comes when called.

Why this name? I had just finished reading The Great Alone in the week prior to bringing her home and really liked the idea of the name Lenora. But Lenora was quickly shortened to Norah. And then, in my way of giving all animals lengthened nicknames it quickly became Norah J. Why J? I don't know, my brain isn't logical with these things. And from there, the easy progression to Norah Jane evolved.


I kept her in the tack room exclusively for the first weekish she was here. She spent much of that time sleeping on a blanket under the couch, coming out every time I entered the tack room.

As she gained confidence in her new surroundings, I began finding her sleeping on the couch or on the saddle racks. And now, her most favorite sleep spot seems to be on the top racks.


She was incredibly interested in the goings-on in the greater barn by day 3 and would sit in front of the then-locked cat door watching everything that went on. Her own personal cat TV if you will! And so, after a week or so in the tack room, I unlocked the cat door and with very little encouragement on my part, she taught herself to use it to enter and exit the tack room in a matter of minutes. She may have had one at her previous residence, but I cannot be certain.

She wasted no time at all enjoying her newfound freedom and room to move about the barn. She quickly checked out the hay and the pallets it was stacked on, walked the partitions between the stalls, and even climbed up into the rafters and walked each individual one systematically before coming back down.


I have yet to see proof of her hunting abilities, but she is a omnipresent terror throughout all areas of the barn top to bottom Even if she doesn't kill many mice, she's definitely terrorizing them which will help discourage them from setting up shop.

Beyond her job as Terrorist to Rodents, she's been a surprising pleasure to have around. She understands that the barn is her realm and hasn't tried to wander up to the house at all. She also follows me all about as I do chores both inside and outside of the barn, taking it upon herself to investigate all the little cracks and crevices of the area I'm working in (presumably for bugs and rodents).

Norah is also surprisingly bold around dogs, which I seriously love. That trait isn't innate to all cats and is PERFECT for teaching Miss Taiga better cat boundaries.


If Taiga sticks her nose in the cat door while Norah is in the tack room, Norah will leave her perch just to fly across the room and smack Taiga's nose. Kenai, too, but he doesn't have the insatiable fascination with cats like Taiga does and has only poked his nose through that door a time or two (whereas Taiga would happily set up shop with her face in that door for the rest of time).

While I'm sad Nymeria didn't work out, I'm grateful for the chance to welcome Norah to Starlight Lane Farm! So far, Norah is a kickass barn cat and I am looking forward to footing room and board for her in exchange for her services for many years to come.
Posted by Liz Stout at 2:22 PM