As much as Griffin and I both adore and love jumping, it's on the back burner for awhile, taking second place to dressage work.

Austen asked me a few weeks ago if I'd be interested in riding with Stephen again in December. I checked the weekend, checked my schedule, checked the resort opening date (it is opening weekend, but I can probably take Saturday off), begged the weather gods to cooperate with me, and gave her a tentative "yes" - heavily dependent upon the weather cooperating.


I didn't dream I'd be lessoning again until spring, so given this chance, I decided I had to take it. Having homework to work on through the winter would be a-ma-zing.

Key homework points from my August lesson with Stephen were:
I have been practicing each of these points, and more.

I now have a horse that:
I'm having a lot of fun, though I do wish I could have eyes on the ground more often and/or the opportunity to have lessons closer at hand. I can't even video myself any more because it's too dark too soon. I don't mind riding in the lack of light, but as far as videoing goes, it sucks.


At Austen's recommendation, Griffin and I have even begun working through training level tests. The first day, things went SUPER well and Griffin even offered some of the best free walk he's ever offered. He was also riding into the corners nicely at each gait, responding nicely to my leg asking him to bend through them. Our geometry definitely needs some work with our circles though!

Lauren was out one day when I schooled Griffin, and so I had her take some photos for me. She definitely isn't as jazzed about watching me school dressage as she is watching me jump (don't blame her), but she did get some media for which I am grateful. Unfortunately, the Universe being as it is, I had one of the worst rides I'd had on Griffin in weeks the day that the camera was present. To his credit/defense, it was the first week of gun season and we're slam-bam in the middle of a very active hunting area with guns going off pretty constantly.


The above are quite representative of most of our ride. Griffin. Was. Not. Having. It. He braced nearly the entire time, was tense, and generally didn't give a flying fuck about what I wanted from him. Even our tried-and-true rapid-fire transitions involving walk-canter-halt-canter and halt-rein back-canter-walk-canter couldn't garner his attention to me for more than a few brief moments. He still braced and twisted his body to evade.

Despite this though, we did have a few nice moments.

I'm sad that we couldn't have one of our more typical (for us) rides while I had the chance to get media, but I can't say I'm all too surprised we had a bad day the first time the camera was present in a long while. However, as I noted above, it is important to me to be able to share the bad times so that our progress means more in the future. Additionally, the issues we are having now are new issues which means PROGRESS is happening!
Posted by Liz Stout at 8:30 AM 17 comments: 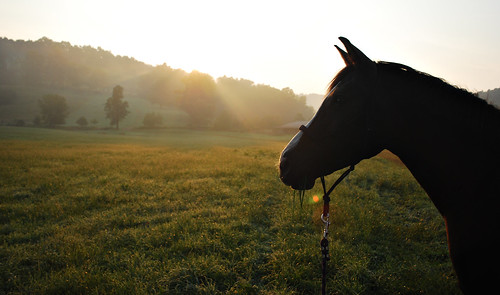 Q's ~60 day ultrasound was yesterday to see where we are with healing of her suspensory.

No huge miracles have occurred, but the suspensory is looking better and showing more organization. It is absolutely NOT worse. Improvement > worsening condition.

All she really needs is time it seems. So, while patience sucks, that's what we are doing! Two months down....ten to go.
Posted by Liz Stout at 11:11 AM 12 comments:

How old is the youngest/greenest horse you’ve ridden?  Honestly? Probably 20 - 22 months. I was young and I didn't know much at the time and was choosing to trust the "professional" who told me to get on.

How old is the oldest horse you’ve ridden? Had a person tell me a mare I rode when I was in middle school was 36, but I knew that horse for another 8+ years, so I highly doubt she was that old! Definitely have ridden horses in their mid-20s.

Were you scared of horses when you first started riding? Not in the slightest.

Would you say you’re a more nervous rider or a confident rider? Confident, however certain situations do make me question my confidence!

Biggest pet peeve about non-horse people around horses? If I'm in a public place with my horse and the public is decidedly non-horsey, I HATE being asked if they can ride my horse. Um, no. I do NOT know you and even if I did, probably no.

A time you’ve been scared for your life? (horse related) When I fell off Sip and in his scramble to get back on his feet he used my sternum as a step stool...

Have you ever fallen off at show? What happened? In place of "show" I'm going to have to say "endurance ride", and yes. Q spooked due to a deer in mile ~43 of our 100 miles and down I went. She also spooked due to horses approaching from behind at a ride in April which resulted in me landing flat on my back (but this was more of my fault for riding very loosely at the time as I mistakenly thought we were taking a break!)

What’s a breed of horse you’ve never ridden but would like to ride? You know, I've been around several Gypsy Cobs but haven't ridden one. Paso Fino also tops the list.

Describe the worst behaved horse you’ve ridden? Any horse that has ZERO respect for what I'm doing in the saddle and blows through my requests or totally ignores my every ounce of effort trying to "ask" for something from the animal.

The Art of Being Dirty

Of the list of blogs I read/follow, I've got to say, I'm pretty sure I have the filthiest grey horse around.


But it simply cannot be helped. I don't board at a "facility" and warm water is a foreign concept in the winter months. Additionally, I'm a firm believer in 24/7 turnout; all 3 of my horses are turned out on 28 acres with 5 other horses. Dirt balls. All of 'em. Q and Stan just hide it better.


I never planned or really wanted a grey horse because I knew their being dirty would drive me a little batty. And the whiter Griffin becomes each year, the more his dirtiness irks me. And to make matters the worst possible, he has a supernatural ability to find the dirtiest, muddiest areas to roll after a ride. Nearly anyone who has ever seen him roll post ride is absolutely appalled and will stammer out shocked words of, "Oh- Oh! He- he's really doing that?! Does he- does he always do this? He's so- he's so DIRTY. Do you see? He's- he's a brown/black horse now! Ugh!"

Yep. He is. But it is what it is. He's happy. He's healthy. He's well taken care of and groomed thoroughly each time I visit. I even use a high powered blower to blast the dust off of him in the winter, believe it or not.


The mud and grass stains will just have to persist in photos during the winter months. At least it isn't poop?

Who knows, maybe he can win the award for *The Dirtiest Grey* one day?

Tell me about your dirty horse!
Posted by Liz Stout at 8:08 AM 26 comments:

We had an outstanding week banding raptors in Cape May for the Cape May Raptor Banding Project this year. (FYI, this is NOT something I do because of my job. I actually take a vacation to volunteer with this project.) More birds in our short time there than we've ever had before. Monday we had 53 birds through the blind! Talk about ringin' (banding) and slingin' (releasing)! A dozen birds were in the blind at one point. I was the one processing that day. It was beautiful chaos. So many Accipiters (sharp-shinned and Cooper's hawks)!

Notable birds banded throughout the week were: red-tailed hawks (RTHA), northern harriers (my spirit bird)(NOHA), merlins, a red-shouldered hawk, sharp-shinned hawks (SSHA), Coopers hawks (COHA), a northern goshawk (NOGO). Of these, we had a wealth of adults, which was a thrill. Usually, we're dealing with hatch year birds.

Birds seen but not banded: golden eagles, bald eagles, kestrels, peregrine falcons. Of these, we had some pretty close calls with the latter three. Peregrines are always an absolute BLAST to watch hunting with their acrobatic diving at top speeds. We even had a juvenile bald eagle come into the station for a serious look, but he ended up swooping off to perch in a nearby snag. An adult bald also looked like it would come in, but dropped last minute into the marsh (to never be seen again).

Without further ado, have a photo dump of birds of prey!

This year was definitely lacking in color compared to last year. Regardless, I still tried my best to capture some of the autumn splendor that did emerge.

And don't forget, if you're able to donate to help the Lakota who are standing up to DAPL, please email me at estout18 (at) gmail (dot) com and I'll let you know how to direct the payment.

Happy weekend to you and yours!
Posted by Liz Stout at 4:46 PM 7 comments: