Carly, you asked, so you shall receive! Here's a photo dump of Griffin's greying process.

From the Archives: Life Changes

I've been sitting on this news for, well, months now. Unlike many, I had little to no desire to share my "big news" in a public manner after it happened. But as time has passed and I've told as many people as I can in-person or through direct message, it seemed high-time to share it.


Dave and I eloped on February 2. 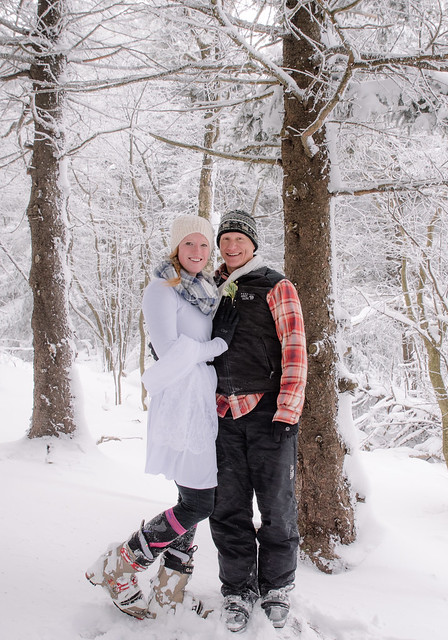 The Story: We were both working our ski patrol jobs and got married that morning while we had extra coverage on the mountain (and before it got very busy). The weather wasn't exactly welcoming  with temperatures ringing in at a balmy -24°F with the wind chill.

I had only told a handful of people we'd be eloping. Of those, I don't think I shared the date with anyone except fellow ski patrol and a photographer friend because it was sort of necessary to tell them. In fact, I didn't even decide on a date until about 2 weeks before!

One of our neighbors whom I'd shared the news with surprised us the night before our elopement with what I've coined a "bride in a box". She worked with a local shop to put together a box full of wedding "necessities": disposable champagne flutes, a bottle of champagne, a veil, some ribbons, a bouquet, a boutonier (I left the bouquet at home lest it become a blackened, shriveled mess upon entering the frigid outside air), and a garter she'd sewn herself complete with some blue ribbon and little snowflakes!

As if that surprise wasn't enough, we have the greatest friends on ski patrol with us. Three of them surprised us with some modest decorations at the place we were married and a cake afterwards! Coupled with the champagne, we were able to have a lovely little "reception" afterward.

Dan, my farrier who is mentioned throughout the blog, married us in a very short < 5 minute ceremony as our friends/coworkers witnessed. We even had our token "wedding crasher" in another friend who was skiing for fun that day. If the weather hadn't been so brutal in the morning (the sun did come out in the afternoon), we would have had a few dozen more crashers because the annual Groundhog Day XC ski from the neighboring XC resort had planned to drop in on us (the owner is a good friend of ours and his son is on patrol with us).

We had a short walk downhill from our ski patrol hut to where we were married - because yes, despite the brutal cold and wind, we were married outside on top of a mountain. Dan led the "procession" followed by our last second (literally) "ring bearer" and "flower girl", the latter of which flung snow from a metal bowl we found lying around.

Following the "ceremony" and the toast and cake eating, we went for our first "ride" as a "just married" couple. With Dan in the horns (term for the toboggan handles), we were put in one of the toboggans we use to off-load injured customers from the hill and taken off the mountain amidst cheers - and [loving] jeers - from our friends who skied and boarded alongside kicking up waves of snow over us the whole way. Oh, and did I mention there were beer cans tied to the back of the toboggan?

After our shifts ended and the mountain closed that night, word had spread around the valley and we had an influx of friends in our tiny little ski patrol building for hours. It was a lot of fun and a very stress-free way to get married.

However, not one to miss a chance to enjoy a good time with friends and family, we're celebrating in the near future by throwing a big potluck. Planning a party is way simpler for me than planning a wedding would have been! I'm so very excited to see so many friends and family in one place very soon.

And, of course, photos! Credit to Brian Sarfino who braved not only the weather but my camera which he'd never used before this morning. The pictures and the attire of everyone except Dave and myself tells the true story about how brutally cold -24°F is.