I've gotten in a handful of jump schools since bringing the horses home. But sadly, between the field being full of wood that needed to be split and inclement weather that led to poor footing conditions (I really don't want to tear up my field!), jumping has been something I've done very minimally since moving the horses home.

However, the latter half of my staycation consisted of several consecutive days of no precip, light winds, and sunshine. A perfect combination to setup idea footing for jumping! And so, on the final evening of my staycation, I dusted off my jumping skillset and took Grif out for his favorite kind of fun.

We flatted for a good 20 minutes, added in some ground pole work, then cavaletti exercises, and finally popped over the 4 XC jumps I currently have setup in the field. (One is out of view of the camera.) 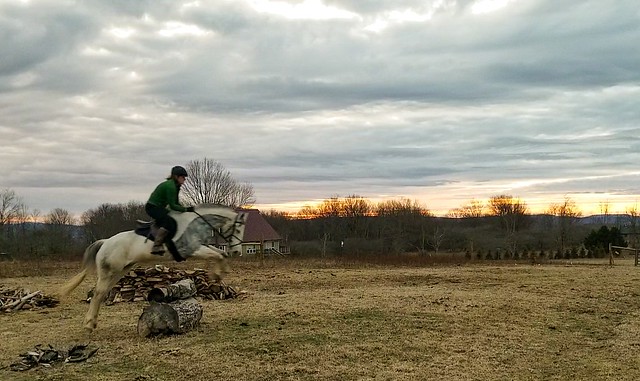 While rusty, there was SO much about this ride to feel good about. Grif has matured so much and I have a lot more trust in him these days than I once did so far as will-he-or-won't-he-jump. He was forward and our rhythm was smooth and comfortable. Honestly, prior to pulling out the camera, things felt the best I think they've EVER felt. But then of course, despite knowing the video would never have to be shared or saved, once I started filming things didn't feel quite as perfect. 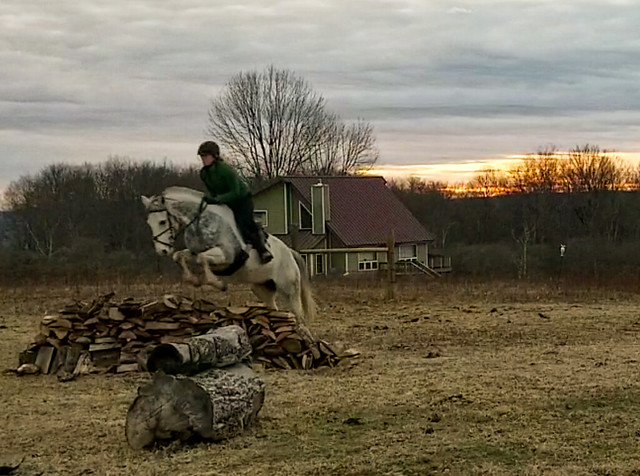 Don't get me wrong, for not jumping with any kind of consistency for the better part of a year, there is SO much to be happy about. But all the same, I wish just once my nerves about being "watched" could be completely absent (though I must admit, those nerves are infinitely chiller than they once were - go me!) so I could have a visual of what that "perfect" feeling actually looked like. I'm just so curious!


The best takeaway from this jump school is that Grif and I both still have it. We may be rusty in areas, but the foundation we built over the past several years is still very much there. Our trust in one another has grown, too, and with that I'm really excited to see what we may accomplish later this year.

If I have my druthers, I'd really like to get out to two or three MDHT schooling trials at Loch Moy this year. That will certainly depend on time/finances though. However, making it to these events will depend greatly on finances and scheduling conflicts (of which I have many lol).

What I absolutely DO plan to do this spring, however, is to construct several more XC jumps on my property that aren't in the horses' pasture. I've got three or four designs in mind right now, and I have all the materials I need to construct them. It's really just a matter of finding the time to do the grunt work once the weather breaks. I reckon focusing on one jump every couple weeks will be more than doable though.

The project as a whole should be much simpler than building a barn was last year, haha! And the thrill of having my own little private XC course will be beyond awesome. As much as I wish for more snow to ski (we did have 4-6" dumped on us last night), this project certainly has me eager for spring weather more than ever. Ah well, I'll have to be patient.
Posted by Liz Stout at 11:11 AM 6 comments:

After years of dreaming about taking a staycation, I finally scheduled one for the week of my birthday this year. It was everything I dreamt it would be and more. In fact, I think I'll have to take one every year!


Started off the week with dinner at a friend's house. Salumi and schnitzel from hogs raised by friends and cured/butchered by our host as well as Moroccan goat eggrolls, also raised/butchered by our host. I am beyond grateful to have such good friends who raise, butcher, and cure their own meat. Well over half the meat I consume comes from local businesses like this!


I worked my final days on ski patrol over the long weekend and Monday. Yes, my final days. No, the resort hasn't closed. I quit a job for the first time in my life! For a lot of reasons, but suffice to say it was well merited. I look forward to getting back on a different mountain next winter.


And speaking of that different mountain... I also enjoyed a super fantastic ride with the mountain's new GM's wife while on staycation. She has a horse training facility where she currently lives in Lexington, KY and was up helping with some of the mountain renovation last week.

We were introduced back in December because we were both "horse people". Which, y'all know how that usually goes. Sarah and I both looked at each other with polite expressions on our faces like, "Oh, okay. Sure. Probably won't be my kind of horse person, but hi." Except when we started talking... Yeah. We didn't stop. And our husbands rolled their eyes and wandered quietly away as we geeked out about hay analyses, her 5* and Olympian neighbors in Lexington that she routinely works with, and discussed the mare she's planning to take PSG this summer if she stays in KY and doesn't move to WV.


I opted to let her ride Griffin, knowing his exuberance wouldn't bother her. Upon their introduction (in the barn) she promptly dubbed him "Sparky" for his excited-yet-polite in-your-pocket wants-to-be-helpful temperament. They were pretty fast friends despite Grif being LIT. He was so lit, in fact, that I opted to throw in a few short uphill gallops to let him get his willies out. Grif thanked us for that decision by calming down a few degrees immediately after. Sarah spent the rest of the ride laughing at his vibrant personality as he expressed his opinions about not being the lead horse for the ride.

We ended up riding for 1½ hours, covering 6 miles and climbing over 1500 feet. While Sarah was a bit skeptical about the rugged footing conditions in places, she was praising the hell out of my "mountain horses" by the end of the ride and joking about how Lexington's primo horse country has skewed her perspective a bit. It was so wonderful to get all three of my horses out (another local girlfriend joined us) and to spend so much time nerding out over horses.


A really huge to-do I knocked off my list during my staycation was to find more hay to get me through until July. I reached out to the facehive to get some recs and was impressed with the number of options presented to me! After striking out with immediate local options, the first cold call I made resulted in finding another 300 bales. SCORE.

I had a little bobble with my truck that morning, but was fortunately able to borrow a friend's work truck and trailer. I've still got another 200 bales to pick up this weekend (hopefully with help?!), but it feels really good to have 100 bales put up already. It feels doubly good to know that it is stacked well this time and not as haphazardly as it was this summer!


I ended my staycation with a trip to Hevetia (hel-visha), a little Swiss German village (pop'n ~40?) hidden in the Appalachian mountains about 90 minutes from Canaan. The reason for our visit was 1. a friend lives there and 2. it was Fasnacht, a prelenten celebration where an effigy of Old Man Winter is burned.

The house we stayed in, a former inn, was absolutely incredible. Built in the early-mid 1870s, there was a wealth of history contained within it. I questioned our friend, who lives there, for nearly an hour on the various things throughout the house. What an amazing history lesson!

I drank and ate and made merry visiting with friends new and old. We ended up missing the parade and skipping the dance (these events are what all the tourists drive in for) in favor of attending several house parties. While the tourist attractions are great, I felt I enjoyed a much more authentic experience getting to spend time with the descendants of the families who founded the town.

Fasnacht was a wonderful way to end my staycation. The whole week was so relaxing and I feel remarkably rejuvenated as a result. With the time change coming in short order + my office move happening next week (helloooo 7 minute vs 40 minute commute!), I'm looking forward to many more hours available for horses and otherwise. I've got so many exciting mini projects planned that I am eager to implement with my new available hours. With any luck, I may have my own mini XC course by summer! Stay tuned...
Posted by Liz Stout at 6:00 AM 11 comments:

While this winter has been absolute crap for those of us who enjoy snow, it's been fun to watch the horses play in the little we have had.