Yesterday was my eight year anniversary with Griffin.


It's so hard to believe he went from such a little dork to such a pretty fellow (albeit, with the worst clip job ever right now! sigh). 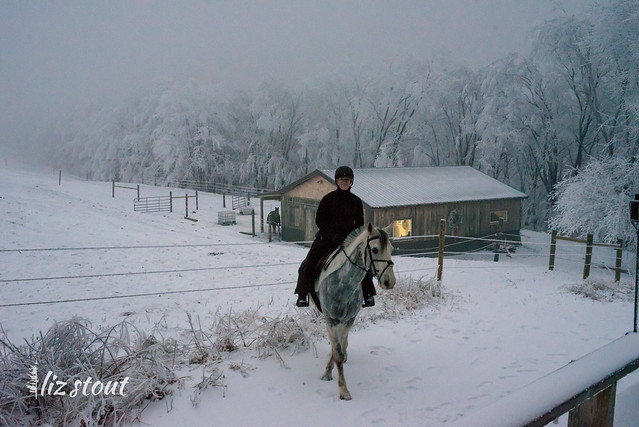 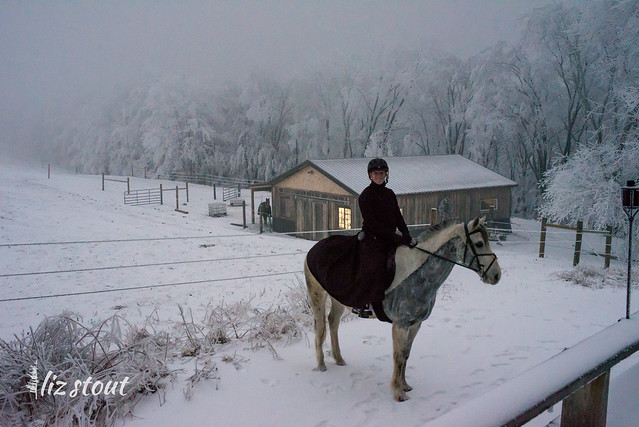 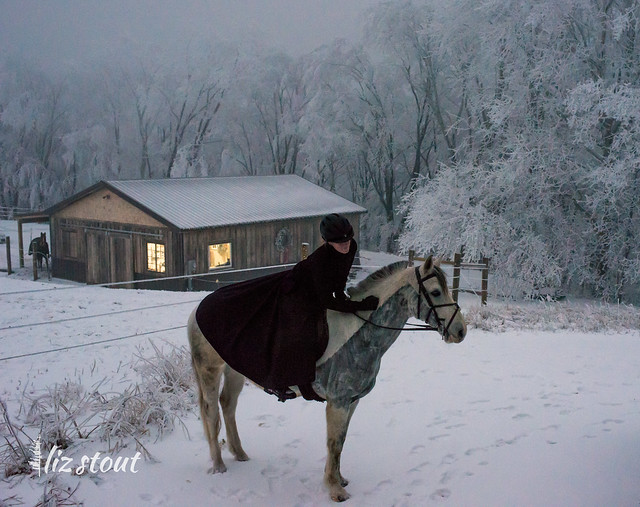 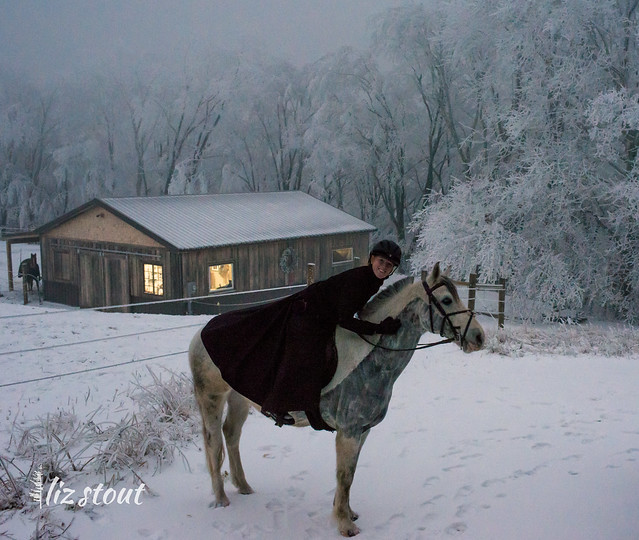 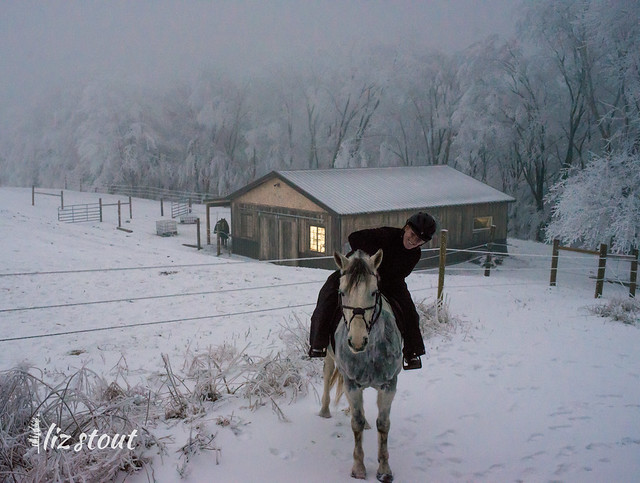 Weird haircut aside (ohmygoodnesswillitevergrow?!), this guy is my soul. I love him dearly.

We enjoyed a 3-mile, 30-minute ride last night in an absolute winter wonderland.


The trees are absolutely caked with rime ice! It's both beautiful and destructive, as several large branches are breaking and falling from the excess weight. Grif and I stuck to mostly open areas along the edge of fields last night. I grinned like a fool the whole time. It was so beautiful and ethereal to ride in that winter wonderland!

Happy eight years, buddy. Here's to many more!
Posted by Liz Stout at 7:30 AM 8 comments:

The second episode of Liz's Barn Babbles is here! I know you've all been waiting with bated breath. Or maybe that's just Austen. ;-)

For this episode's inane topic, I'll be showing you my hay nets and what I've done to help make filling them less annoying/painful. This video just pertains to loading them prior to hanging them on carabiners in the horses' stalls for the night. Eventually, I'll also show my outside feeders because I have received some interest in those.

Source for my horse-specific hay nets (For custom nets, it takes him a bit. I received mine 10-14 days after ordering. He's very responsive to messages though, so do reach out if you have any questions!)
Source for my non-horse-specific hay nets (I got the #21 x 1-3/4" Nylon Netting KNN21175 in a 10' x 10' square. If you want it to be a bit more durable, I'd recommend getting the tarred one so that it's more weather-proof. Additionally, I was impressed with how fast the shipping was for this netting! I got mine about 3 days after ordering. I anticipate ordering from them again because their shipping and costs were lower than the first source. If I do this, I will absolutely be getting the 1" openings because my horses have learned the hay net game very well!)
Toggles for paracord

Well. So much for my feral barn cat.

Around the time of my post about her, she somehow escaped the barn. I'd been keeping it closed up as best I could, but she managed to slip out at some point.

I put food out for her for days following her disappearance and left the barn door cracked. Curiously, the dry food would be eaten, but the wet food remained untouched. She'd been gobbling the wet food down in short order in the weeks before she disappeared! Additionally, I saw no tracks in the snow around the barn other than some birds and mice.

When the weather became inclement, I moved the dry food inside inside the cracked door, hoping that she'd be encouraged to shelter in there. (I'd given up on wet food at this point.) I even went to the effort of carefully raking some snow around the area where the bowl was so I could see tracks of whatever was eating it. Still no cat tracks, only a few passing mouse tracks, which were admittedly hard to see due to their size, the lack of weight to create the track, and the type of snow.

After a week and a half of trying to discover if Nymeria was still in the area, I borrowed a trail cam from a friend to at least find out what was eating the dry cat food each night. (Yes, only at night despite it being out all day!)


Needless to say, I quit filling that bowl with food following the discovery that MICE were eating it! UGH.

I'm really not sure what more I could have done to encourage Nymera to stick around. Almost one month in the tack room exclusively with all the warmth and comfort and food and water she could want followed by around two weeks in the tack room/barn with food/water before she up and left. Oh well. At least she's spayed? I guess I'll try again with a domestic cat instead of a feral cat next time...
Posted by Liz Stout at 6:00 AM 28 comments:

One of my big "number goals" for this year is to attempt to ride at least 600 miles.

I've tracked my annual mileage with increasing frequency since 2012 with the Endomondo app and my Garmin watch, from which data can be transferred to Endomondo. From 2014 through 2016, I managed 500+ annual miles. Then, in 2017, I moved to Canaan and the horses remained in Elkins. As a result, my 2017 and 2018 annual mileage was around 370 miles.

As everyone knows by now, I moved the horses home last year. Prior to the move, I had to be more judicious with my available time and was almost exclusively riding Q in an effort to get her fit and ready for a 50-mile race. Riding Griffin and Stan - especially Stan - went on the back burner. This didn't have a huge effect on the boys' fitness levels because, prior to the move, they had 28 acres of 24/7 turnout and were part of a very active herd that moved all over the property during a 24-hour period. However, moving the horses home changed the turnout situation significantly. They went from 24/7 turnout on a large tract of varied terrain to a 40' by 60' dry lot with occasional (weather-dependent) turnout on two one acre pastures, which they didn't have access to until late September. 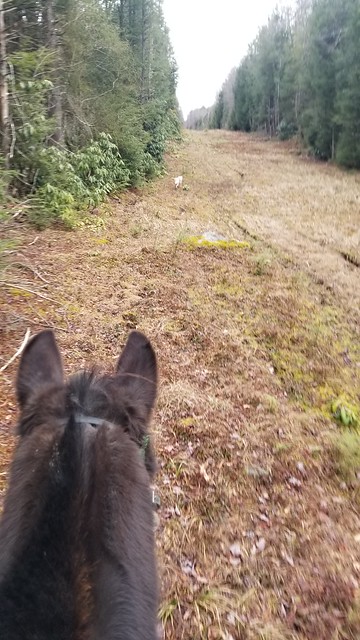 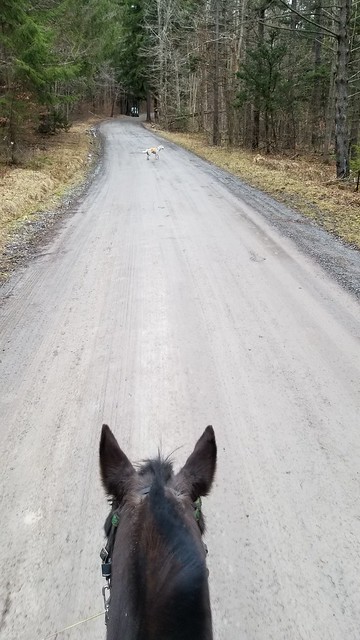 Riding more became a priority due to the limited turnout situation. Fortunately, my barn commute went from 50 minutes one-way to about 50 seconds one-way allowing more available time for riding. From August through November, I rode a minimum of 8 days each month (so, roughly, twice a week). It wasn't a lot, but considering that I was working 40 hours/week, still finishing the barn & fences, doing daily barn chores, and cutting and splitting 3-4 years-worth of firewood most weekends (oi vey), that frequency was pretty good! By the time December rolled around, the barn and fences were complete and the firewood was cut and split. As a result, my riding frequency in December increased to 14 days with several twice-a-day rides. 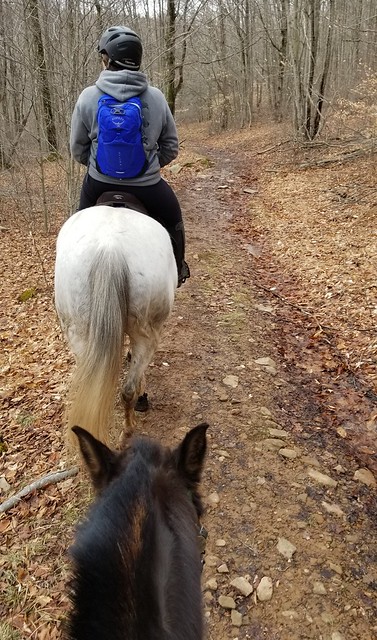 Most of my rides are around 4-miles long as it is easy to do a 4-mile circuit (that could be repeated for more distance) from the barn. I will also be gaining access to a 5-7 mile route with tons of elevation gain quite soon. (I can't tell you how grateful I am to be able to head out and do that without trailering!) I'll be utilizing these trails often to help preserve my pasture, which is where my jumps and dressage letters are. To offset the lack of an arena, I incorporate dressage movements on trail quite often. I also practice oodles of natural jumps, ditches, water, and banks when I'm on trail, which Griffin absolutely loves. It's all about making the most of what you've got, yes?


The rides I put in during the latter half of 2019 really helped to set a base of fitness on the horses. Thanks to those rides, I've begun pursuing longer conditioning rides off-property (when the road conditions allow me to trailer off the mountain) this month. Q has been out for two longer conditioning rides so far and Grif has been on one. Each ride was only a 15-20 minute trailer ride and each was in a different local location.

I'm already having so. much. fun. planning and implementing these rides. And I honestly cannot remember the last time I felt so excited to plan/schedule rides. It is such a thrill to have so many options so close to me!


My current hope is that I can trailer off-property for at least two conditioning rides of 12+ miles per month. Two longer rides per month coupled with shorter rides twice a week is a schedule that has worked rather beautifully to keep Q in competition-shape in the past. Grif does well on that schedule as well, but he does even better if I can fit in one more ride per week.

And Stan? Well, as I've stated ad nauseam, he owes me nothing at this point in his life. If I wanted him in shape for some sort of distance competition, he'd need a 6-day-a-week schedule. But fortunately for Staniel, my only goal for him is to keep him fit enough to keep his joints happy so he may continue to enjoy his senior years with ease.

Hopefully, 600 miles in 2020 will be quite achievable! And hopefully I'll end up with some fit, happy horses as a result of all those miles. No matter what, the first full year of having the horses home is bound to include many more miles than I've enjoyed in the past couple years, and I will enjoy every single one!
Posted by Liz Stout at 8:33 AM 9 comments:

Apologies for any formatting errors - I have received countless errors from Google in my attempts to post this all week...

There is no purpose to this post beyond sharing several photos of the horses having fun in the snow earlier last week. Looks like we may see another dusting of snow sometime this weekend - fingers crossed that we get more than that! I miss the winters of my childhood.