Winter this year in Canaan Valley and the surrounding highlands was one of the best we've had in a decade (maybe more). The weather was cold, remained cold, and the snow that we received slowly built up and up and up. It was amazing to have such a solid base in the woods in areas that hadn't been skied in so long.

But then, it was as if someone flipped that proverbial season switch we all joke and wish we had. On February 28 the rain began, the temperatures warmed, and through the next three weeks, all of the snow melted. In fact, much of March was classic spring weather for these parts. Mild at times, but almost entirely seasonable in a way that never seems to happen. It's been like something out of a storybook with how perfectly slow and deliberate the landscape is waking up and coming back to life.

Age aside though, Kenai is doing wonderfully. He's peppy, happy, and more vocal than he's ever been for whatever reason. I guess he finally got the memo at 11 that huskies are usually rather talkative. (Neither of mine are.)

While Kenai may have some gnarly osteoarthritis in his stifles, it doesn't stop him. He's been the more rambunctious version of himself this month, putting any worries I may have had about his age to rest. He's come on more rides this month than I expected him to, and stuck with me through more of those rides instead of taking one of his many shortcuts back home when he's over it. (Which will never cease to make me chuckle.)

He still struggles with bouts of odd skin issues that result in temporary hair loss in spots around his body, but he isn't digging at himself, licking, or scratching incessantly, so I'm just letting it go. We're due for another round of bloodwork to double-check things, but I'm not too concerned as every vet that has ever run a blood panel on him has remarked how perfect it looks.

All in all, Kenai is doing fantastic for a senior fella with Alopecia X and a history of many CCL surgeries. Cheers to more happy years with my favorite guy.

Big Spring Chores Around the Farm

With the thaw came an onslaught of chores and upgrades around the farm. A lot of work? Yes. But I thoroughly enjoy all of it.

Up first? Evicting the fluffy mops from the tack room. They've got more than enough insulation to keep themselves warm sleeping in the hay. No more tack room for these kitties! They routinely roll and flop about in the shavings in the stall and hay. All of that nonsense sticks to their fluffy coats and is then brought into the tack room. UGH. And so, I toggled the cat door to only let them out if they sneak in while the human door is open; but they will otherwise be unable to enter the tack room. I built them an elevated shelf in the barn aisle for their food so that I don't have to worry about dogs or other critters indulging in it. Arya and Sansa were a bit confused at first, but adjusted to the new setup within about 48 hours. 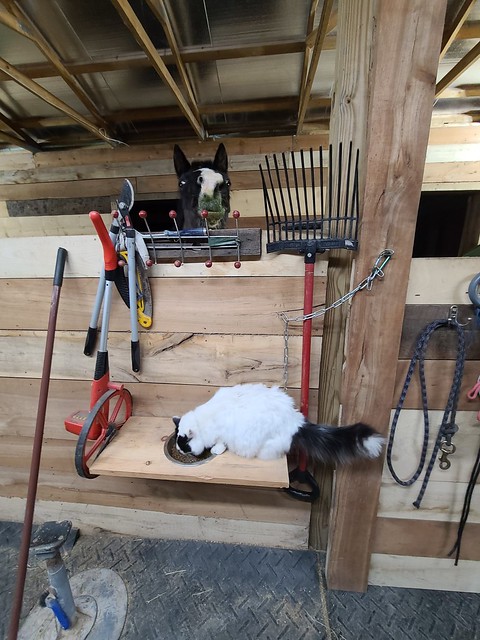 Once the cats were evicted, the tack room got a deep clean and a few upgrades like a shelf for the TV finally!

Next up, I cleaned the trailer thoroughly with a broom and blower to get it ready for adventures. I still have plans to recaulk it (it's almost as old as I am and requires lots of little maintenance like this) and have the tires and such double-checked by a shop.

The first labor intensive chore of the spring was getting 2½ tons of stonedust to help level out the area under the overhang where the horses spend most of their time.

All in all, the dry lot has held up  beautifully since the horses moved home in August 2019. They obviously spend a lot of time under the overhang though, as a result that area of stonedust became more compacted than other places. Not a surprise and not a big deal...until you take into account that heavy rain events can result in water sheeting over the saturated dry lot and flowing downhill...into the stalls and barn. Yikes! Fortunately, it was a simple enough half day of work to fix.

As the landscape continued to thaw, the grass started to come back to life. Before it could get too far along, I wanted to drag the pastures to bust up manure that I hadn't mucked last fall. In true Liz fashion for all things horse/barn/farm related, I MacGyver'd a drag out of my old truck tires and retired climbing rope. It took a little less than an hour's time driving the truck around the pasture, but those tires busted up almost all of the manure and left the pastures looking a lot better than I had expected!

And the final chore of March was getting the XC jump area tidied up. This entailed weed whacking the spiky vegetation with a ninja blade, moving jumps around, dismantling/repairing other jumps, and finally *drumroll* digging new beds for perennial flowers that will also double as jump fill / ditch fill. Fortunately, I had a borrowed tiller to get most of this accomplished. Unfortunately, a critical belt in the tiller motor tore before I could finish, so I had to dig one bed completely by hand with a mattock and abandon the other two beds I was planning to do.

An Uptick in Riding

With the thaw has come more riding. A lot more. And even a streak of 6 days in a row, something I hadn't done in what seems like ages.
After a well-deserved, unavoidable vacation for much of January and February, it was nice to get the beasties out moving again. We're building back fitness right now with our sights set on lessons and more fun travels in the near future.
Posted by Liz Stout at 12:37 PM 16 comments: