Sunday: Morning dawned before I was ready for it.

Saiph and I got up quietly, ate, dressed, and slipped out leaving Charles and Mike to sleep away the morning while we rode.

The day was colder than the prior one, but not miserable. We arrived at the barn, readied the mares, and were on the trail in no time at all.

The goal: Fit in as many miles as we could at a good pace for 2-ish hours.

I told Saiph that we should try to canter and trot as much as possible. The footing was good, the terrain wasn't too rugged, and the mares were both more than fit enough to handle it.

We set off along the track we'd taken days prior with Mike. We wound down bridle paths between farms, through woods between residential areas and more farmland, over logs, across a road, and into the fields surrounding the farm with the percheron stallion...who was turned out on this day.

In past experiences going down the road that parallels part of the stallion's field, Saiph and Kathy have witnessed his mad rush to the fenceline that inevitably startles the mares. As a result, Saiph fosters a bit of anxiety about this 100 yard stretch, and rightly so!

She took the lead as we neared the stretch of road we'd need to travel that paralleled the stallion's fence. I wasn't 100% certain how we were going to handle this (dismount? walk by?), but remained ready nonetheless.

Saiph chose to gallop by, hoping the speed of our passage would confuse the stallion if he saw, and ultimately provide us plenty of time to pass before he could reach the fenceline if he chose to try.


It worked like a charm. The stallion merely looked up from his position about 100 yards away to stare at us as we went by. I can only imagine that by the time his brain processed that the strange fast moving objects were horses, we were gone.

We cantered and trotted on toward Four Corners where we veered left down a dirt track that created a boundary between crop fields. We cantered this until it met a woods line where we followed a gravel road for a time until it turned to pavement at which point we backtracked at a canter and gallop to the field where we trotted the perimeter to link onto a single track trail through the woods.

The woodland trail was a bit rockier and a bit muddier. It reminded me a lot of the Scioto Run 50 and some of the lowland terrain at Virginia Highlands 55: mature, but open, forest with a dense understory of downed wood and non-native (some invasive) shrub/scrub.

As we trotted, cantered, and jumped logs along this stretch, I called out all the similarities this trail had to trails I'd traversed during rides last season so Saiph could be better prepared for the atmosphere that will accompany her first ride in April. With each obstacle along the way, I called out to Saiph how it would be treated if you were "at a ride", "We'd all walk this section," "These rocks here are a lot like terrain at _____ ride and _____ ride," "The way this trail winds is very similar to ____," "Everyone but the front runners would probably slow up through here."

Eventually, the trail wound back out and around into the crop fields.

A hunter pace had been held the previous day through this area, so Saiph and I just set out cantering, following the hoofprints in the soft soil.

Cantering and galloping, winding around the perimeter of the fields, the mares vying for the lead position almost every step of the way, power in every stride. 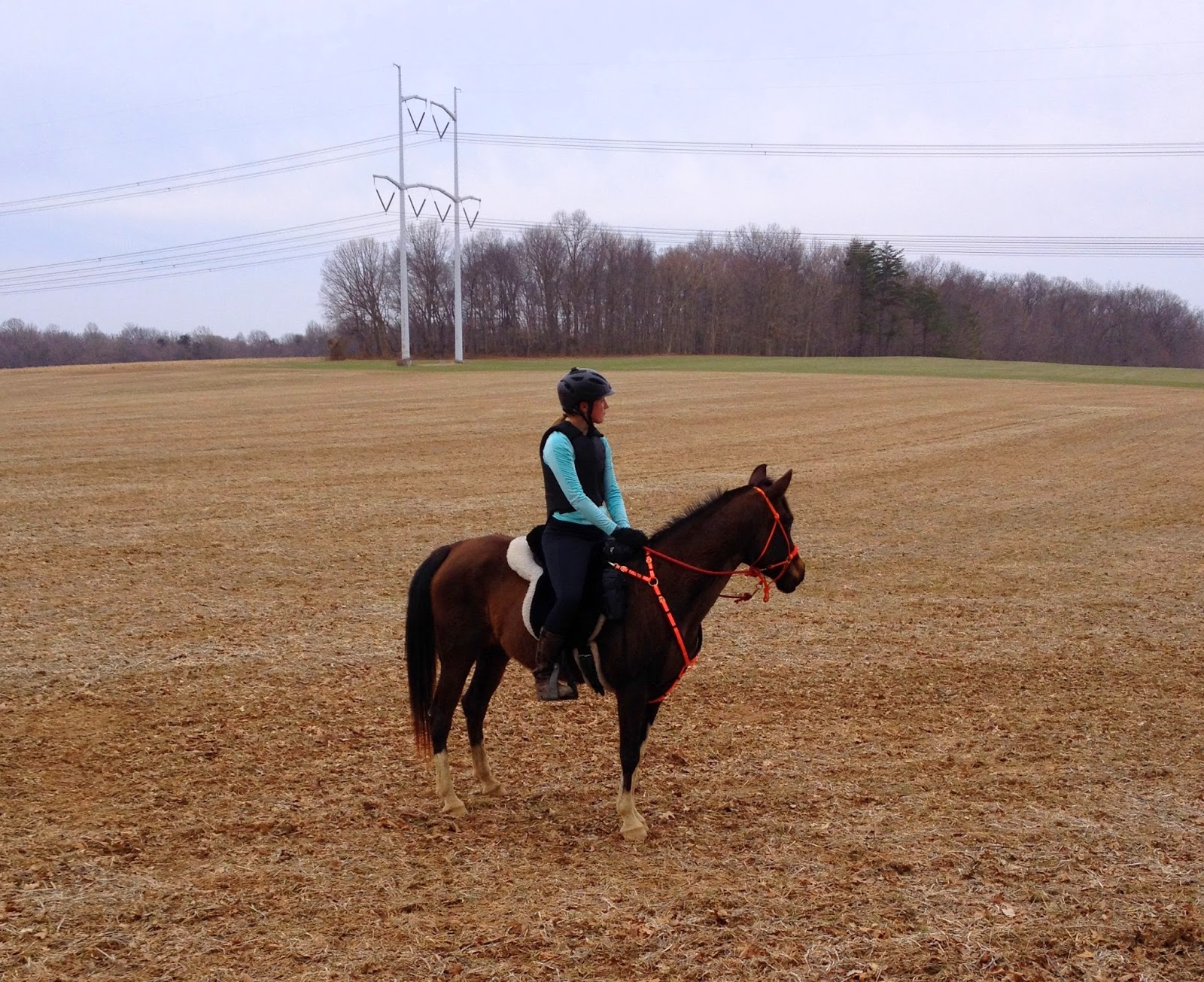 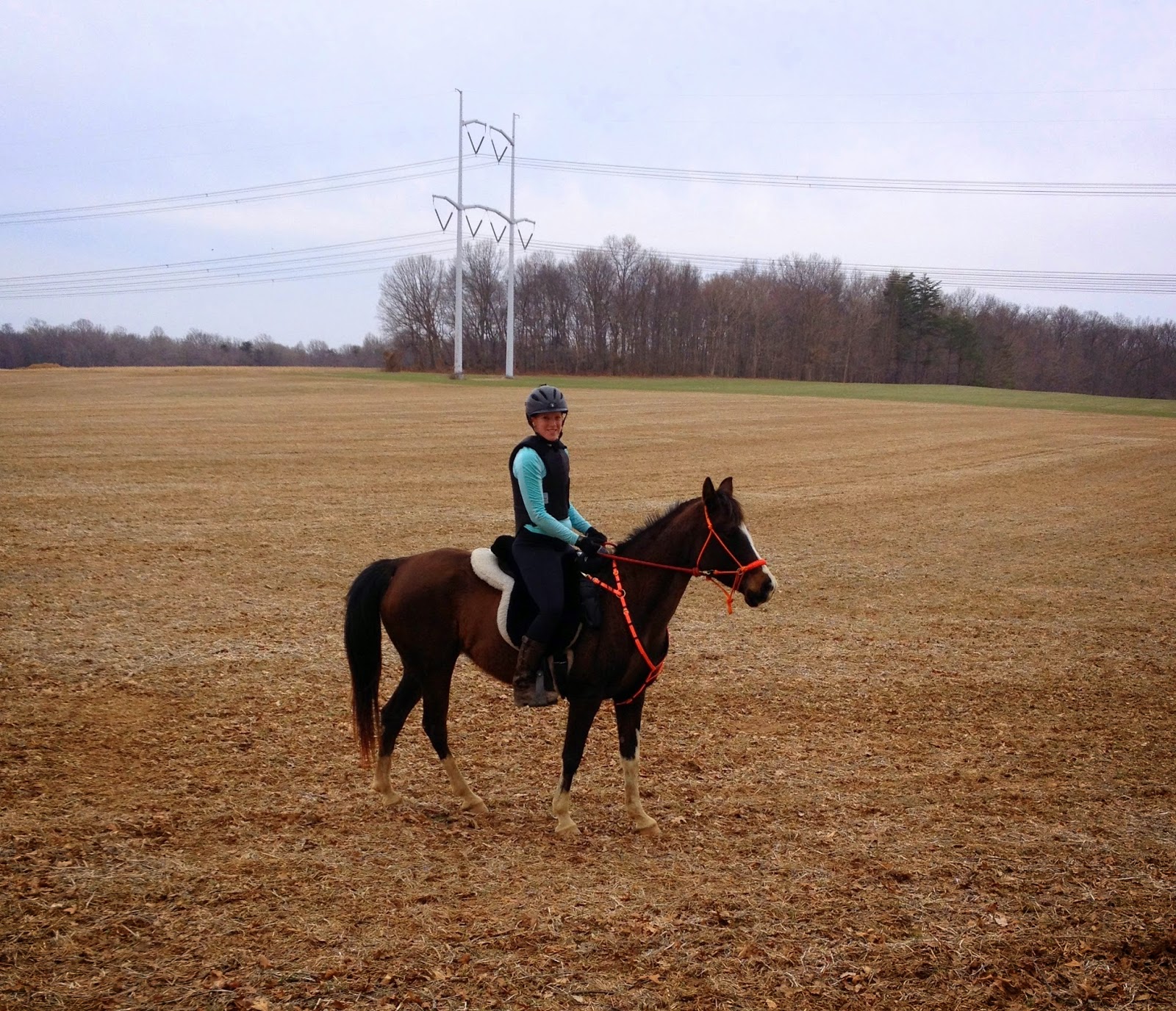 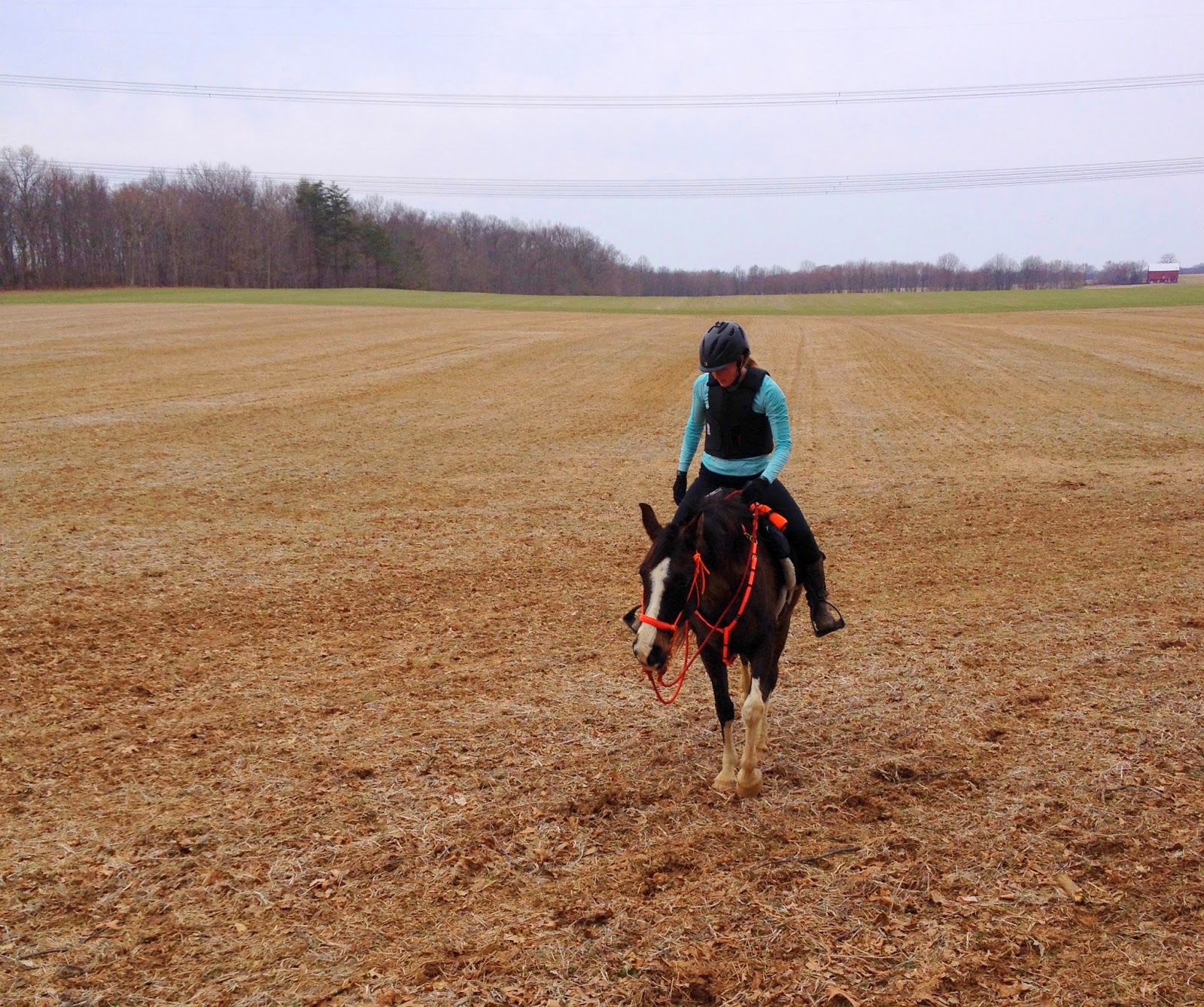 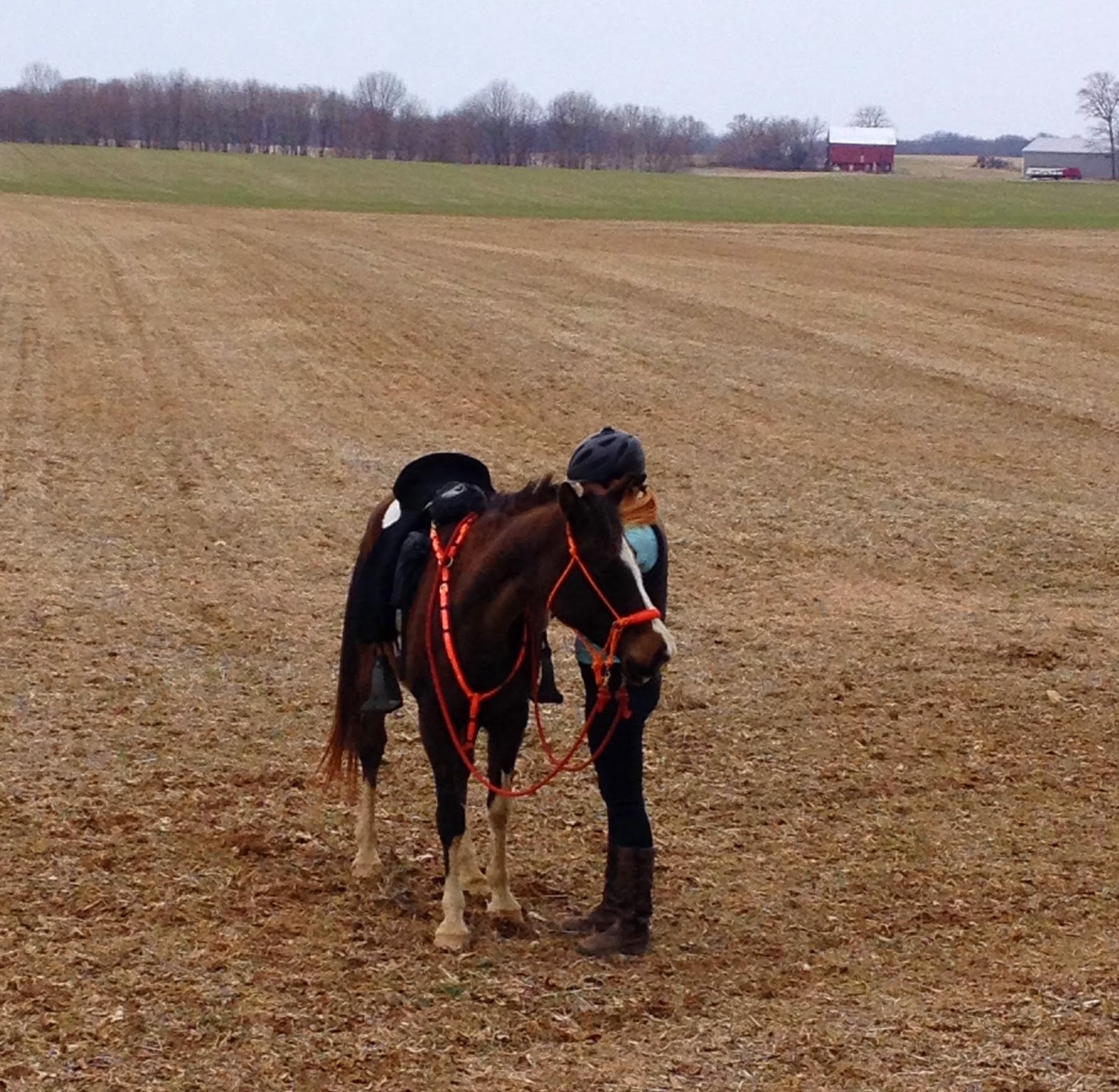 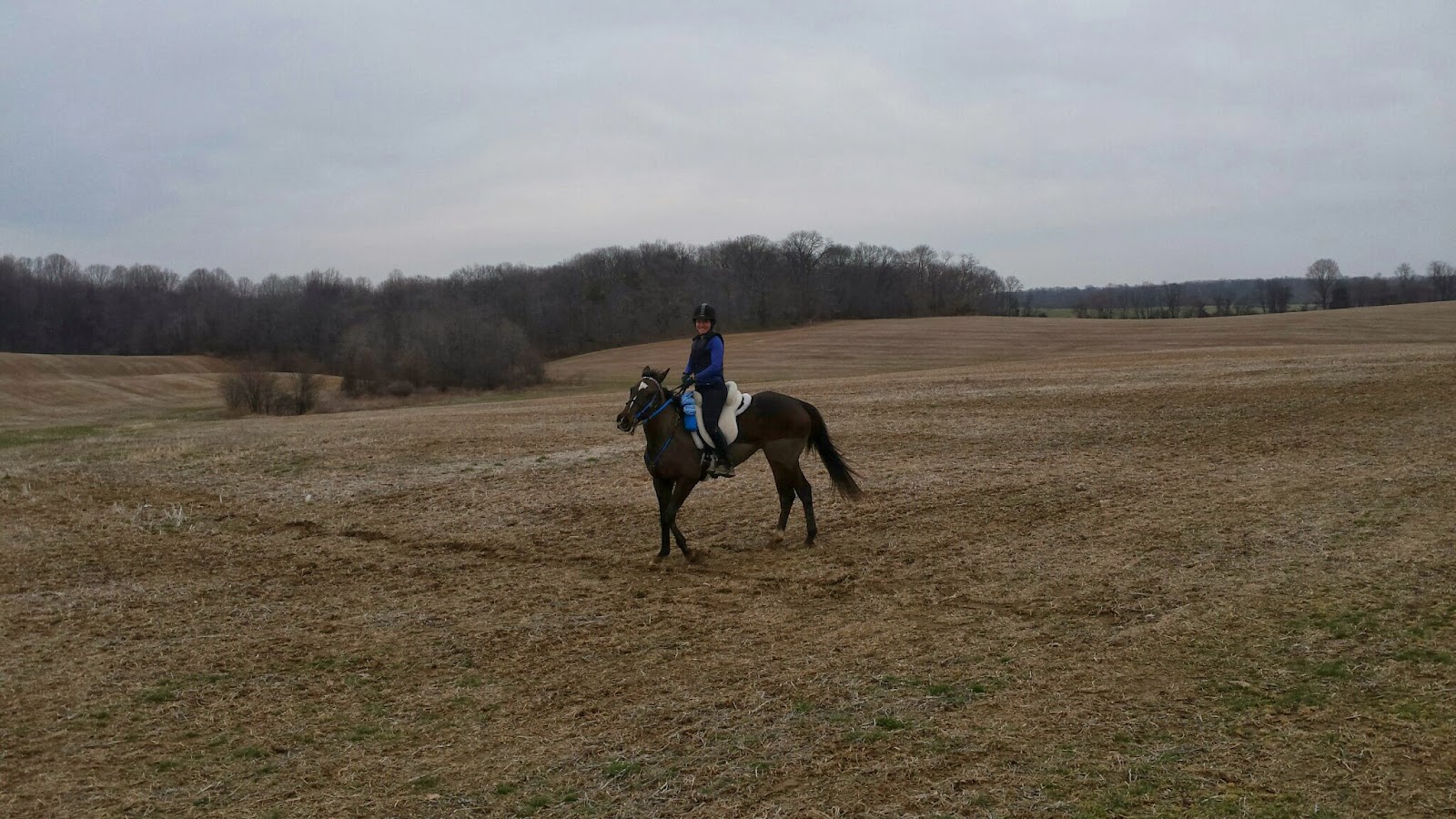 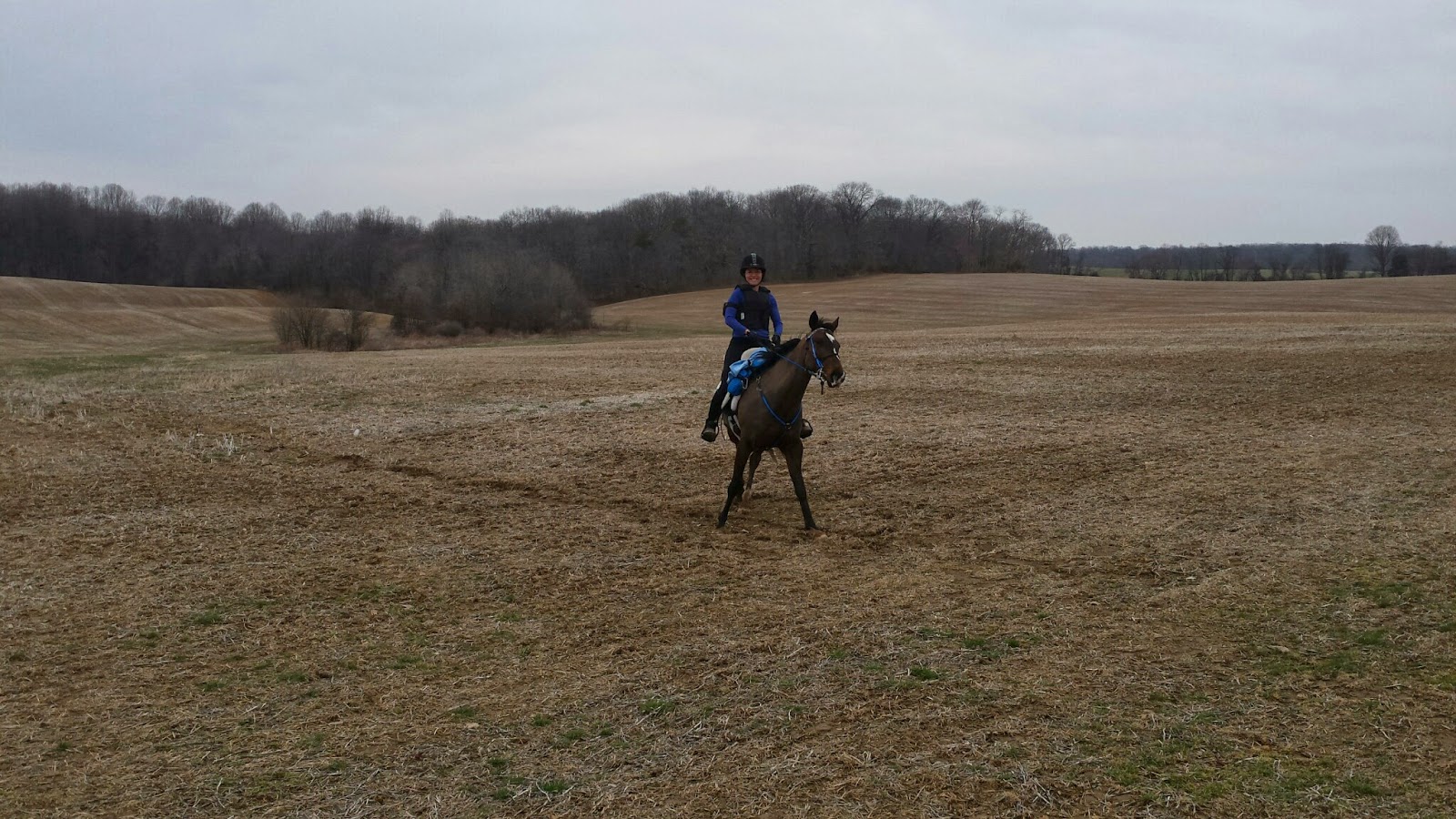 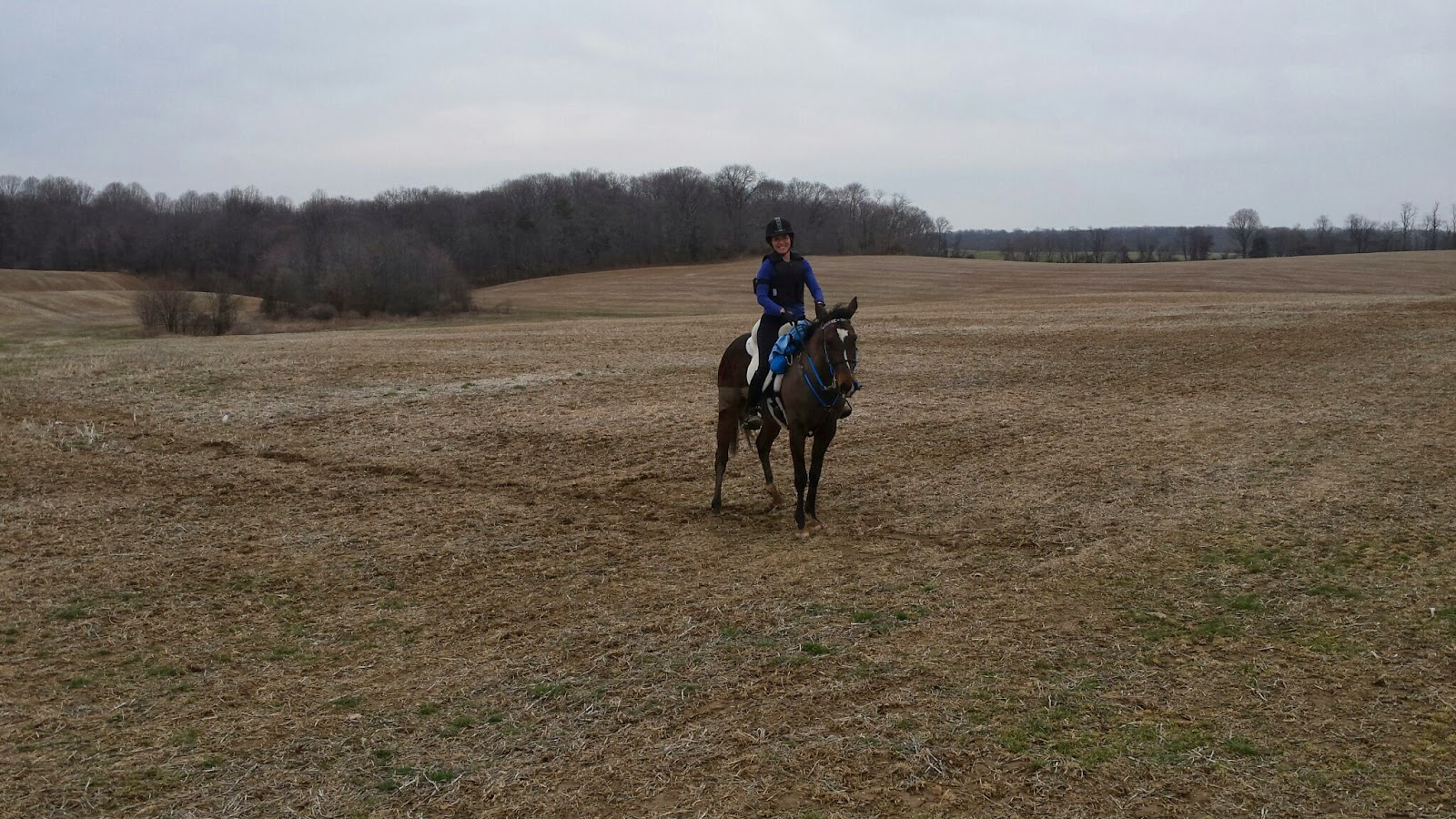 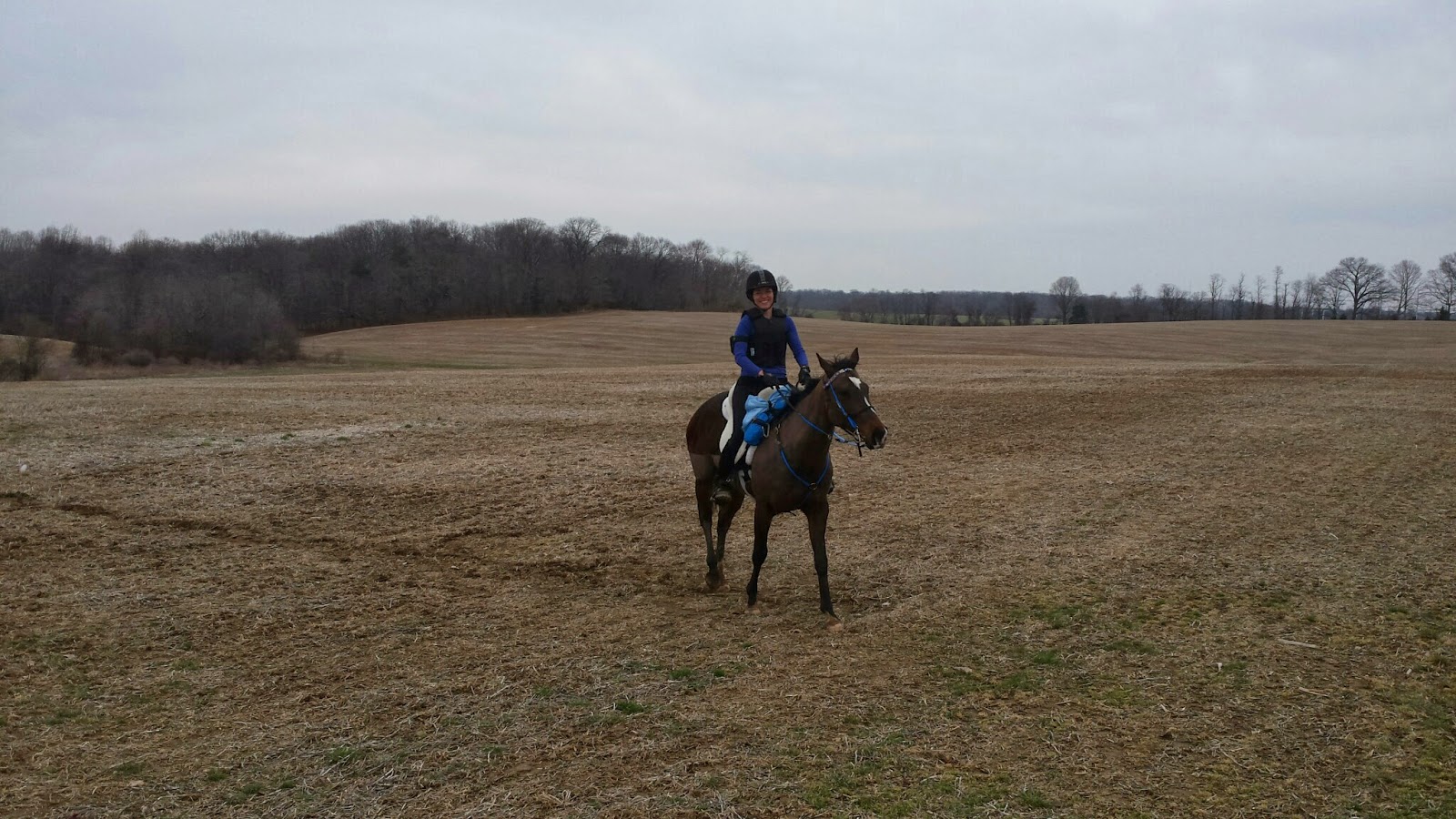 I think Q really enjoyed herself. It was a great change of scenery from our usual riding, though if I had to pick between the mountains and the rolling farmland I'd take the mountains any day!

Eventually, we reached a point where Saiph suggested we turn back for the barn.

We retraced our steps, trotting and cantering the whole way home, walking the perimeter of the property upon our return to avoid dismounting to open gates. The walk cool-down around the property even included a small bridge crossing, which, impressively enough, Q did with minimal argument. GOOD MARE.

Back at the barn, Saiph and I untacked the mares and hosed them both down. We left them in adjacent stalls to munch on hay and dry out while we headed back to the apartment so I could pack up, get Mike, eat food, and then return to the barn to hook up the trailer and head home.

Originally, I'd wanted to book it out of town by 2p at the latest. Food and hunger overrode my hurry though, and Charles, Saiph, Mike, and I headed out to a pretty sweet Mexican place for a great lunch. As a result, Mike and I weren't leaving the barn to head home until 4:30p.

The drive home was uneventful, but seemed to drag on forever. It was a little after 10p by the time we got back to the barn.

Mike and I unloaded Q, unwrapped her legs, blanketed her, and turned her loose into the field of boys vying for her company. We then unhooked the trailer quickly, not bothering to unload anything, and headed home.

Basically, to better explain and sum up this weekend and the myriad of adventures I get myself into I give you this: