Crystal clear cotton candy pink skies and the first frost of the season greeted Griffin and I as we set off to Loch Moy for our first Fall Starter Trial on September 10. As we headed east into the rising sun with nary a vehicle on the road for the first hour, I realized that while the early morning wasn't my favorite on a weekend, it certainly wasn't bad with such a promising beautiful day ahead. 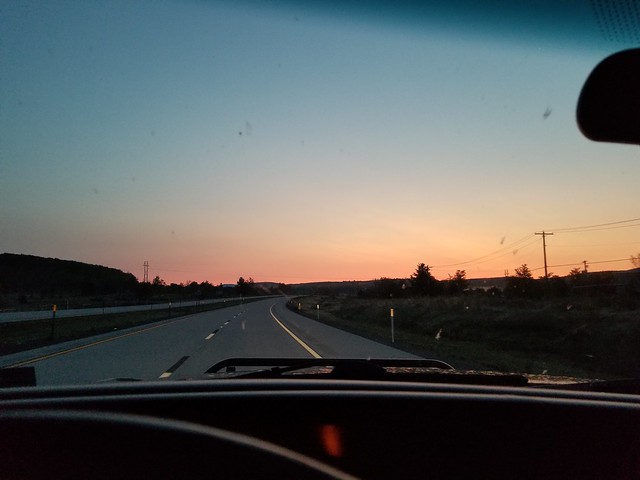 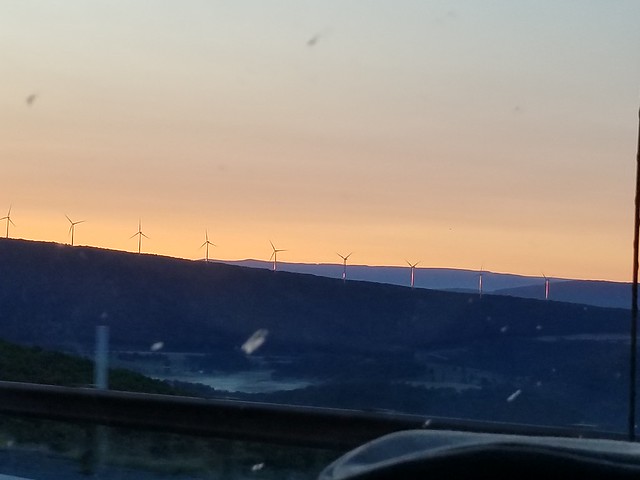 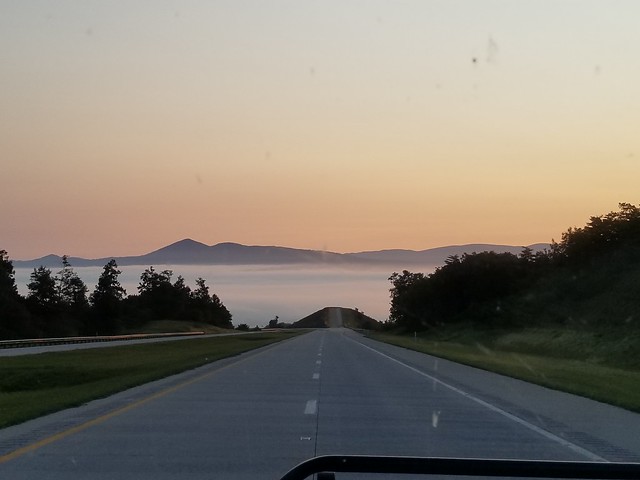 As the morning wore on and we dropped in elevation as we headed east, the temperatures slowly rose from the 30s to the upper 60s/low 70s. Perfect weather for riding!


I resisted the urge to stop and capture the astoundingly beautiful morning about six times as we traveled, and ultimately arrived at Loch Moy around 9:30am with Emma pulling in right behind me. Perfect timing!


All media henceforth thanks to Emma! 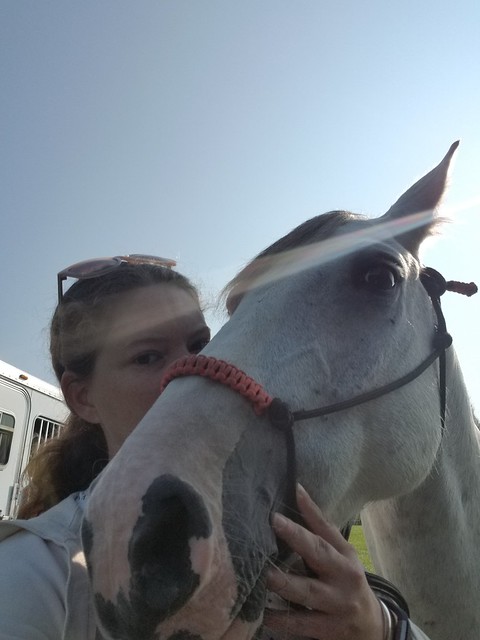 We parked, greeted one another, and then set off to check-in before pulling Grif off the trailer, tacking up, and heading to warm up.

By the time we reached the warm up, we didn't have much time. I set to trotting and seeing what kind of horse I would have today. Grif seemed to have more energy than last time, so I tried to see how much I could push him to be rounder than the "flat" he was exhibiting. While I felt like I had a horse I might be able to get into the contact more than I had last time (and more in line with how he is at home), Grif continued to exhibit resistance and, like at Twilight, I didn't care to pick the battle with him. It wouldn't be fair with the short time we had to warm up. 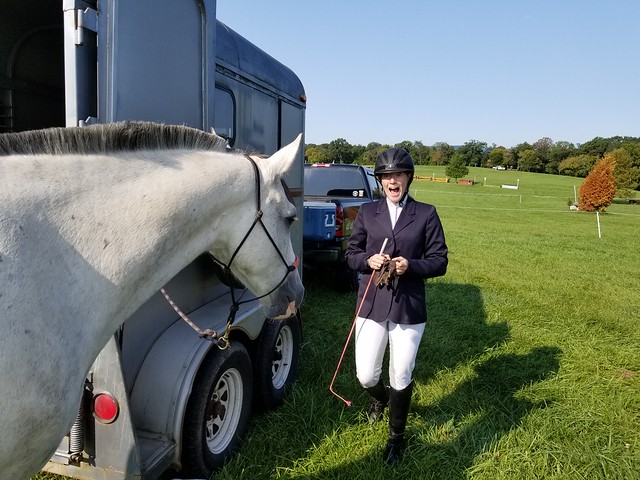 One day he'll ride at a show the way he rides at home (so much more round, I swear), but we aren't there yet. The atmosphere and the traffic in the warm up area is too much for both of us and makes it hard right now. It's much more critical that Griffin enjoys this venture and finds success than anything else right now. I'll just continue to look forward to the day that I have the "fancy" horse, as Chelsey has called him, from home at a show. 😉 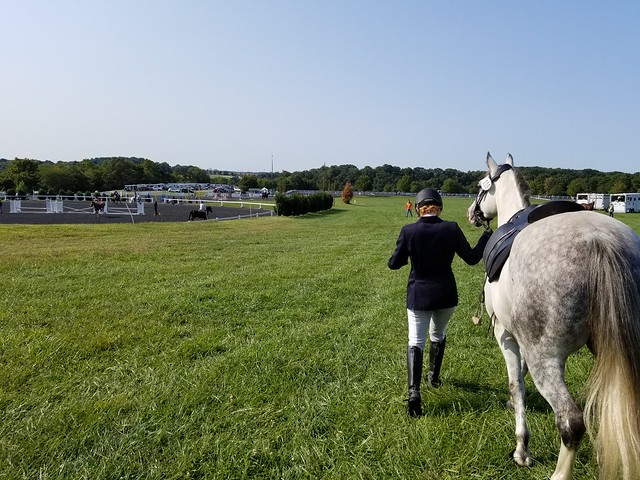 The very wonderful thing about our short warm up was that Grif was more reliably picking up the correct lead. This is a sticky area for us that is a direct result of me rarely ever having knowledgeable eyes on the ground to help me when I ride. It is what it is right now, and I'm simply grateful for the good moments and incremental forward progress. 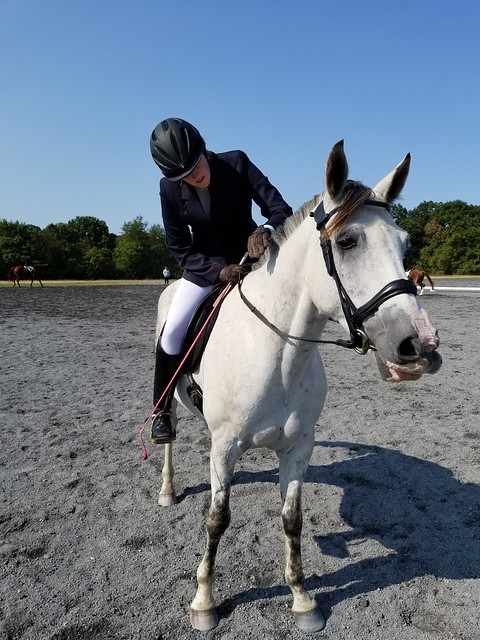 Another positive moment in warm up, despite me feeling like Grif was exceptionally flat and strung out, Emma assured he looked really good, was moving freely and even flicking his toes! This was great to hear and would be the first of many times throughout the day that I felt like things weren't going well when in reality they were pretty peachy. Once again, that whole eyes on the ground thing - boy does it make a difference!

With a word to Emma about how much I felt like a fish out of water among everyone else, I headed in for my dressage test.


Transition in and out of canter
Score:6.5
Judge's remarks:Down transition somewhat late 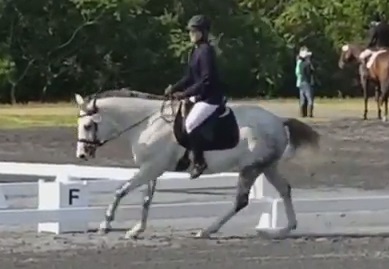 Transition in and out of canter.
Score: 7.0
Judge's remarks: None 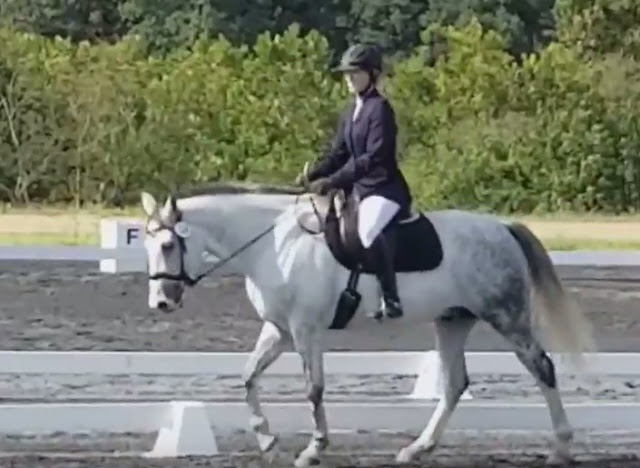 
Overall, I felt like the test was comparable to past tests. I did quit breathing partway through when I was caught up in the moment and hyper-focused, though I did pretty much smile throughout. Bonus is that I remembered the test with ease (I think I will forever worry about forgetting halfway through)! Grif felt steady throughout, too, though I'd like to start asking/expecting a bit more from him next time. Step by step!

The lack of warmup hurt my performance more than Griffin's I think - I felt more unbalanced and generally floppy in the saddle than usual. This resulted in me losing my inside stirrup during my first trot circle (I did quickly regain it). While I got my shit together more for the jumping phases, the whole day my riding did feel off. I attribute this to the fact that I lacked a lot of physical activity due to the high stress from work for the past month-ish. I've since rectified this, but it was what it was for this ride. 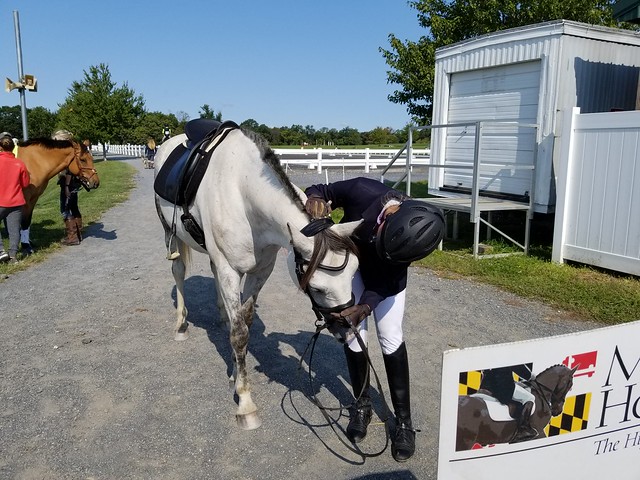 I definitely know our bend could have been better and remember actively thinking this in a few places during the test - all of which the judge noted. Totally fair. It's hard to do all things in the moment sometimes though, y'know? We're getting there though and will definitely improve with more time. Still, our effort was good enough to earn us a 30.5 which is very comparable to the test from Twilight. As a scientist, I like consistency in my results - especially when I know my inputs and outputs were pretty similar between experiments. 😉 We absolutely have things to work on, but I'm grateful we're consistent at the moment and not coming up with new issues [yet], haha. New issues will come and when they do I'll welcome them because they'll be a sign of improvement in other areas.

All in all, I'm really pleased with our effort. Grif was the least "looky" he's ever been during a dressage test which is the absolute best thing ever. He's really figuring out this new "game" we're playing in public places. That's the biggest goal so I'm really happy to see success in that department. His increasing level of comfort and relaxation about the atmosphere thrills me. I absolutely adore this horse and his brain.

Stay tuned for the next installment - our stadium round!
Posted by Liz Stout at 11:11 AM