A few weekends ago, I made my biannual pilgrimage to DC to visit Austen, the floofs, and the horses. It was well-timed, too, because while sun was prescribed for my home forecast, warm temperatures certainly were not! I was eager to trade in my Canaan-Valley-cold-weather card for a weekend in DC's forecast that was a good 20-30°F higher! While we didn't get the sun we thought we'd get, it was infinitely better than windy and 30°F that home had.

In past trips, I have felt ill-prepared for the weekend's adventures. Many folks think I cram a lot into a day/weekend/week so far as activities go, but my abilities pale compared to Austen. Good gracious can she jam-pack a day! My dogs and I always come home tired (and sometimes cursing under our breath.)

Fortunately, this go-around, I asked Austen what she foresaw for the weekend. The answer? Copious horse time with a healthy side of PHOTOS. In fact, she informed me she had a brand new 64GB memory card ready and was clearing off a second as we spoke.

Aside from taking copious photos, the plan was for me to ride not only Pig, whom I've ridden a time or two before, but also Bast!


I'm an adept rider. I've got pretty fair balance and proper mechanics. I'm still learning, as we all are, but something about riding someone else's horse these days isn't as easy as it once was! I imagine that's just life when you have your own horses. I catch rode exclusively for the first two decades of my life. But that isn't something I do much any more! In fact, after hitting the dirt hard about 4 years ago, I swore off riding other people's horses unless they were ones I knew well or were horses I could learn something from. Read: their training supersedes my own.

Pig's training far supersede's my own and Bast is trending that direction quickly under Austen's expert guidance. And hot damn are they both SO FUN to ride. I dream of the day I am able to have my horses so tuned into riding off my seat alone. Sadly, my resources and education for learning and training that is in its early stages still. But that's why opportunities like those Austen offers me (full of fun and free of charge), are so very valuable.


He's come so damn far from the last time I saw them ride earlier this year. Such a little adult!

As such, when the moment came and Austen, grinning, told me, "Get your helmet!" I didn't feel any apprehension. And from the moment I climbed aboard, Bast was a complete gentleman.


It was so very cool to ride Bast and compare him to past experiences on Pig. My education within dressage has grown leaps and bounds since my last ride on Pig in October 2017. Comparing and contrasting the stage of Bast's training to Pig's 4th level abilities was really cool. I understood the building blocks that made up Bast's foundation and could see how the rest of the training would build neatly upon it.


Overall, riding Bast was as similar as it gets to riding Grif. They're at a similar-ish place training-wise which lent me a lot of comfort as I rode him around. There weren't a million different buttons or heightened sensitivity to my micro movements in the saddle to worry about at all. Communication was much clearer, which is always a plus! He's just such a cool freaking horse and such a good boy.

After short time, I turned the reins back over to Austen to nab some more fun photos of her and Bast galloping. This one is my favorite.


With Bast thoroughly exercised for the day, it was Pig's turn!

Austen gave me an inquiring look that asked if I wanted to just go ahead and jump on to which I rapidly shook my head, "Nope! You!" She laughed and climbed aboard.

Austen knows I know what Pig's shenanigans look like and knows they intimidate me. See, not unreasonably, Pig isn't fond of a handsy rider. And when he throws his little fits, I get handsy in my attempt to simultaneously pull the horse up and curl into the fetal position. Which, of course, causes him to escalate his opinion. And I'll give him that. Totally fair.


But my baggage isn't unfounded. I grew up riding a LOT of horses with a bucking problem. The first horse who really bucked - and I mean really bucked to the point where the whole audience of judges, instructors, parents, and riders at our 4-H shows would gasp and gape (ironically, this horse's registered name was Buck Destiny) - could easily be brought out of it if I pulled his head up. Thus, from a young age I've learned to pull heads up as opposed to giving more leg when a horse bucks. But I'm still learning, I'm improving, and I'm moving forward, but shit ain't quick or easy.

So, when it came time for me to ride Pig my mind and body hit a bit of a "block". I know I can ride a horse pretty well, but this horse is just so sensitive and well-trained that I worried I'd screw it all up and hit the dirt. Rational brain decided to take a vacation for a few minutes, what can I say? 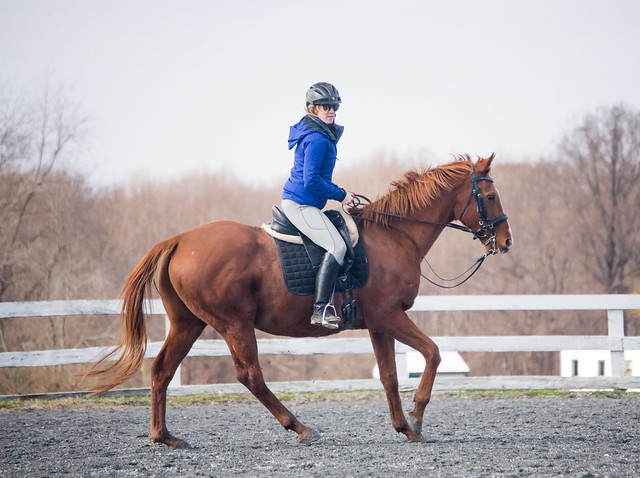 Austen is so helpful though. She knows me and the horse so well and put us through our paces appropriately to warm us both up.

Slowly my rational brain returned from it's momentary vacation and my body realized that, oh hey, I do know how to do this horse riding thing. And, in fact, the horse riding thing on this horse wasn't so hard after all. A year's worth of yoga with an emphasis on my hips has done wonders. Sitting with a more open hip angle and making micro-adjustments with my pelvis to cue and communicate with Pig was infinitely easier than it had been the year before. Crazy, I know.

Regardless, when it came time to canter the red fire engine, my rational brain went on strike again for a few moments. See, my stirrups were quite long and the sensation of having to constantly reach for them at the canter was quite unnerving!


Austen knew just how to get me to loosen up about it though, joking with me in a way that got me to goof off for the camera before I stopped to adjust them. Once they were adjusted to lend me a much more secure feeling, off we went again to give it a whirl. And I even started to relax a bit!

Except, then Pig decided the day was lost if he didn't express at least one opinion:


And I mean, honestly, it wasn't so bad in hindsight. But it did intimidate me in the moment. But not so much that I couldn't immediately laugh about it. He's a good boy. Absurd, but good.


From this moment, Austen started niggling me more about really galloping the little fire engine. I was still hesitant though. What exactly I was afraid of at this point, I don't know. It wasn't logical, that's for certain! Just one of those times a part of the brain overrides the logical part and says, "No," while the rational side tries to ask, "But why?" and is ignored.

Fortunately for my rational brain, Austen chose this moment to note, "Remember, my biggest fear with a horse is getting run away with. Pig is not going to run away with you. Sit up and he'll stop."

Cue singing unicorns and sparkling rainbows. My mind immediately clicked back into place in this moment and went, "YEAH! Okay. Let's DO THIS."

And so I did. And I think the photos tell the story from here...


It's an understatement to express how much freaking FUN I had. Damn. What a thrill!

And honestly, it isn't surprising. I used to gallop Stan around full bore all the time as a teen. I used to race my friends in their cars for Pete's sake. (As such, I know that a car speedometer clocked Stan and I rocketing along at 35mph for few hundred yards.) And I didn't wear a helmet then. What should I fear now?

And so, I'm really looking forward to springtime when I head back for another visit. Plans are already in the works for a full bore gallop session on both boys in a magically green landscape. I can't wait!

Thank you, Austen, for letting me experience the thrill and joy of galloping a thoroughbred. What a magical experience!
Posted by Liz Stout at 7:00 AM