By next winter, my horses will be home with me for good. My barn commute will be zero. My life-long dreams of having my horses outside my window and 100% in my care will be achieved.


I am the very embodiment of the word "excited".

But let's rewind. Because this whole thing didn't happen quickly or easily, and I want nothing more than to document the story for myself to have in years to come. Over the next month or two, I'll publish a series of posts that include everything that went into the planning and preparation phase for this dream to become reality. Then, once we roll into the warmer months and I begin implementing this dream, I'll document all of the pieces involved in the land prep and construction.

I live in a homeowner's association (HOA) in an area that serves as a vacation destination and second-home to many folks from the DC area and beyond. My HOA is comprised of 14 residences and, of those, we are the only 100% full-time residents. One other gentleman is here 80-90% of the time. All others are only here for multiple long weekends and/or extended summer stays.

We're situated on top of a big flat ridge that was formerly a farm. I can run a 1.1 mile loop from my house and only gain something like 75 feet in elevation. It's pleasant to have both remarkable mountain views from a high vantage point and also have flat land. As such, the very large majority of the homes in the HOA are positioned so that they can enjoy 180-270° views of the surrounding mountains and valleys.

The lots are large, folks tend to own several, and the homes are really spaced out. There are limitations on buliding size,  what materials you can build and side your home with, and other limitations on how the appearance of your yard etc. must be kept. Most folks mow their lots immediately around their homes and a local fellow comes up to hay the unmowed areas for his cattle. In the grand scheme of HOAs, it's pretty nice and relatively relaxed.

Since moving up here full time in 2017, I've dreamed of bringing the horses home to one of the vacant lots. But the cost of land in this area coupled with the HOA rules forbidding horses (and cattle, goats, sheep, chickens, etc. - it's quite a long and inclusive list!) kept my dreaming at bay. Even if the HOA adjusted the rules, I couldn't imagine dropping that kind of money on such a small parcel of land.

After Dave and I married and I began exploring boarding options in earnest, I realized that every option in our local area was going to be expensive because it's a vacation destination. And so I decided that before I pursued other options for land in the surrounding area, I would at least ask a friend (a past HOA president) if the option for horses in the development even seemed feasible. I knew it would very, very likely be a quick "no", but I also knew if I didn't at least ask I would always wonder "what could have been".


And so when I saw my friend out and about one day this past summer while Dave and I were walking, I popped the question.

"Hey. I've got a kind of crazy question for you. I'm pretty sure I know what the answer will be, but I've got to ask or I'll always wonder. Do you think the HOA would ever make an exception to allow horses?"

He pondered it for a second before replying, "Well, I love horses. I think having horses up here would be wonderful. I'd be your biggest supporter - my grandkids would love it! I think others would probably be up for it, too. But we'll have to be strategic about how you approach it and ask..."

Cue: a shocked expression on my part!

After I recovered from my initial shock at not receiving what I was certain would be a "no", a smile slowly spread across my face and my mind began whirring with possibilities.


Following that initial conversation, I put pen to paper and drew out the first draft of my plans to share with my friend. I met with him and we discussed my idea and how best to move forward. With his expert guidance and understanding of the HOA, its residents, and history, I put together a proposal for the executive committee to review and consider.

In a shorter time than I imagined, I received a reply from the executive committee. They were in favor of my proposal. The next step I needed to take was to prepare a presentation for the annual HOA meeting on October 28.

I had a solid 2-2½ months to prepare my presentation. It was both a gift and a curse to have that much time! I had plenty of time to prepare, certainly, but I also had ample time for my mind to run amok wondering will they/won't they be in favor and will this/won't this dream actually happen?

The Presentation AKA The Day of Reckoning

Finally, the day of my presentation arrived. An agenda had been set out prior to all HOA members, and item 6a read, "Permission to allow horses on 2 or more lots as requested by Liz Stout..."

All through the start of the meeting, I was nervous. I knew the executive committee was in favor and the path forward sounded straight forward enough, but if anyone had a strong objection to my plan, the whole thing could come crashing down.

Finally, it was my turn to present.

Ever-prepared, I had brought a laptop, projector, and had prepared a well-practiced presentation. I don't think any of them expected this! I laughed and made a joke about my nature to be well-prepared and overly-organized, and then went right into my presentation. 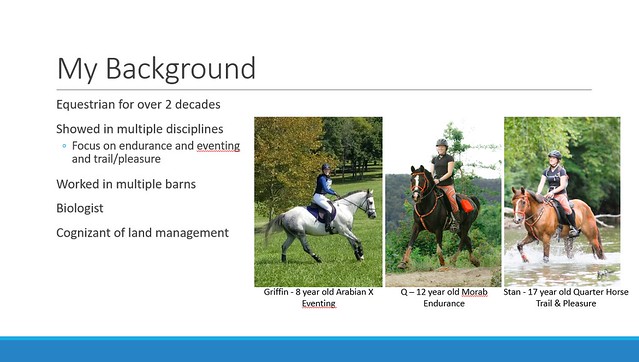 I set the stage by sharing my background as an equestrian, a biologist, and a West Virginia native. I briefly shared the type of riding I do and noted my years of experience working at other barns and my copious visits and observations of other barns local and abroad. From there, I noted that my ideas of a good horse farm revolved around not only providing safe fencing, adequate food, water, shelter, and care for the horses, but to do this in a manner that conserved the resource (land), was aesthetically pleasing, and mindful of the viewshed.

To support these claims, I then proceeded through slides that:

Surprisingly, or maybe not surprisingly because it was a damn well thought out presentation, the few questions I received were clarifying questions that I more than had the ability to answer. Largely, I received a wealth of compliments - from nearly every single person in the room! - for my well thought out presentation, attention to detail, and conscientious consideration of my plans and land management.

A few other small matters were addressed on the agenda following my presentation before the vote was put forward. While these other items were discussed, a sense of calm settled over me. I'd done all I possibly could. The praise was nice to receive. I was even more cautiously optimistic than I'd been, but my mind still halted any sense of jubilation or excitement. It just seemed crazy to think that this whole thing could actually happen.

Ten to fifteen minutes later, it was time for everyone to vote. I locked eyes with my friend who had helped so much to this point. Ever the master of the pokerface, he cracked the tiniest of smiles at me, a twinkle in his eyes.

The HOA president announced my request to the room for a vote. Every single person raised their hand in the affirmative to accept the exception and allow horses. It was official.

I smiled, shyly, still in disbelief that this thing was going to really happen. My friend caught my eyes again, grinning in earnest now. I returned the smile and then glanced back down at my notes simply shocked at the reality of everything.

The meeting adjourned shortly after the vote. I thanked my friend copiously, answered a few general horse questions for others, and told the lady who currently owns the lots I would be purchasing that I would reach out after the HOA paperwork for the exception was finalized.

Once in my car and back in range of cell service, I stopped and sent out a couple texts to those closest to me, whom I knew were waiting to hear how it went. "UNANIMOUS YES!" I declared. Victorious excitement filled me after that. I turned up the music in my car and grinned all the way home.
Posted by Liz Stout at 2:45 PM