I had hoped to provide this update on Friday, but then my computer up and died. Most irritating thing in the whole wide world. I'm only grateful I had all of my photos backed up. Sobbing a bit over the loss of my Lightroom catalog (which hadn't been backed up to my external HD in quite some time), but I will suffer that loss knowing I do at least have the photos and can re-edit as I need in the future! ...and you can bet'cha I'll be backing up ALL things more often in the future to try to mitigate any future technology failures. Ugh. Technology, I hate you and I love you.

At any rate, onto more fun topics!

Like the big hole that was dug in my yard last week!

It probably doesn't look dramatic to those who aren't as intimately familiar with the land as I am, but OMG. When they started digging down to grade it was quite a shock for me. I mean, I knew this would happen, but it was so different IRL. I just couldn't fully picture it in my head spatially prior to the initial cuts.

But let's back up a little bit. Because one does not simply start digging dirt for such a project. At least not on a mountain in West Virginia where there are slopes and trees to contend with! 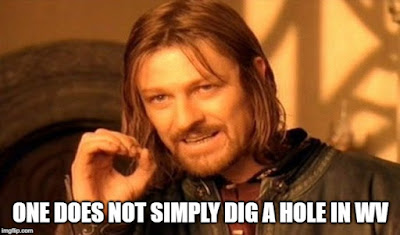 So, as I last updated, the excavator arrived on June 7 and got a jump start clearing trees:

And while I was at work on Monday, they finished clearing the trees, sorted the trees into to-be-milled and to-be-firewood piles, ripped the stumps out, buried some stumps, and burned the remaining stumps and branches.


On Tuesday, they cleared off my top soil in preparation for the real earth moving to begin.

Now, I know my development was once a 200-acre farm. And I know we've got some decent soil for a ridgetop. My neighbors lawns that are only mowed and not treated otherwise are LUSH. But watching my topsoil pile up as they separated it made me realize I don't just have decent topsoil. I've got some dank ass topsoil. No wonder the yards and pastures that remain on this ridgetop are so damn nice!

Even the excavator noted to me how damn nice this stuff was. I don't think I'm going to have much extra, but if I do I plan to do a partial trade for my hay with it. The perks of buying hay from a landscaper! lol

Once the topsoil was cleared, they set up their surveying tools to figure out how much they'd need to excavate to reach grade. The answer? 7 feet.

That both sounded like a LOT and not much at all. I knew it would be okay in the end, but I definitely couldn't visualize what exactly the "end" was at this point! Fortunately, I trust my excavators completely and knew all would be fine whether or not I could imagine how it was going to end up.

And so, the dirt ballet began. 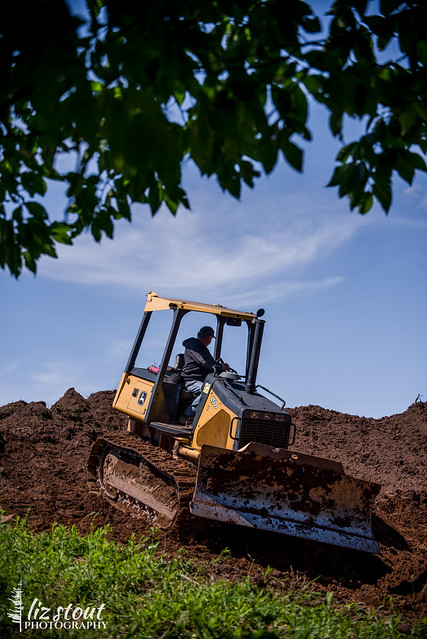 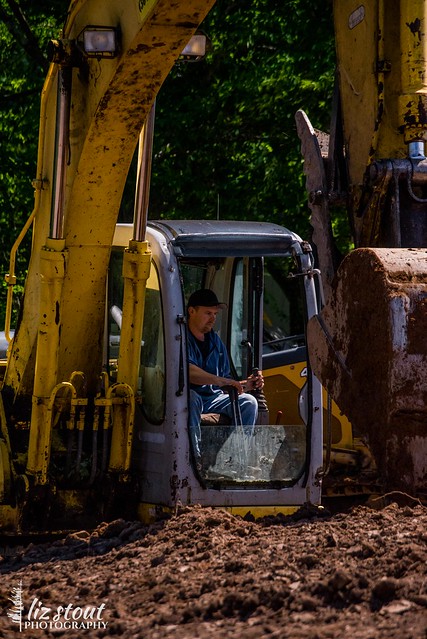 Repetitive scoop after scoop of the excavator and push and shove of the dozer proceeded as the father and son team expertly danced the machines around one another in a beautiful and powerful dance.

By the end of Tuesday, they were halfway done with excavation.


And by the end of Wednesday, things were looking really nice. I could not believe the change by the end of the day! It really came together beautifully.


It was so much easier to see how things would come together after they finished Wednesday. With the exception of a bit more earth sculpting where the dry lot will release into the far pasture, things with the earth moving are pretty much complete.

Despite being lucky with weather all week, the rain finally made an appearance on Thursday, prohibiting hopes of finishing that final bit of earth work or spreading gravel.

On Friday after it dried out a bit, they did manage to get one load of gravel dumped, but then they had to pull the dumptruck out of the site with the dozer due to the soft ground.


As a result, they opted to finish spreading the stone Saturday morning.


And that's where we left things at the start of the weekend.

The excavators will be back after their contracted duties are complete at my future office site in about 2 weeks. At that time, they will finish land sculpting, install the French drain, the trench for utilities, and complete my dry lot. In the mean time, Dave has a nice graveled spot to begin work on the barn!

My assignment this evening, other than oggling over whatever Dave has managed to accomplish will be to get the banks that won't be disturbed again seeded and mulched. Eee!

Can't wait to continue to watch things unfurl and provide y'all with an update soon.
Posted by Liz Stout at 4:30 PM