So back in November I went hunting for the first time.  And I shot my first deer. 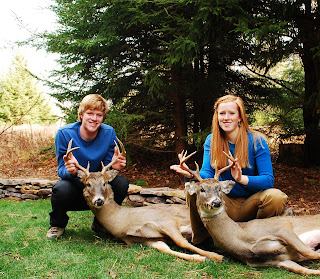 Very surprising, all things considered.  My brother had shot one Monday night of Thanksgiving week.  He offered to take me out Tuesday.  So Tuesday late afternoon I headed out to the stand with him.  I had but two hours to wait and I was given the opportunity for a shot.  I hadn't shot a gun in five years.  I'd never shot a gun so big (300 Savage), nor had I attempted a shot so far through trees and underbrush (85 yards).  [And yes, I recognize that 85 yds. with a 300 Sav. isn't far at all.]  One shot and he dropped where he stood.  Through one lung, the heart, and out the other lung.  A good shot for a first time.

So the work began the Friday of that week.  My brother and I skinned them out, took the hams, shoulders, backstraps, and heads.  The hams and backstraps are wrapped and frozen awaiting consumption, the shoulders awaited me to turn them to jerky.  So much work!  [And I have YET to start working on the skull mounts or tanning the skins!]

I thawed the shoulders out, tore apart the individual muscles, and began picking out fat and fascia and cutting strips of jerky. 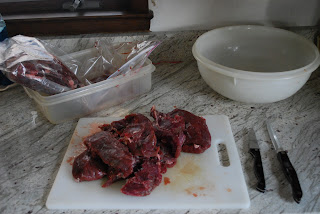 Once I'd completed that daunting task I made up two batches of marinade, spicy and not-so-much. 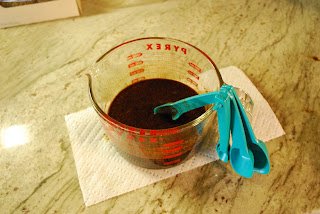 Poured the marinade on the strips and let them set for 30-ish hours. 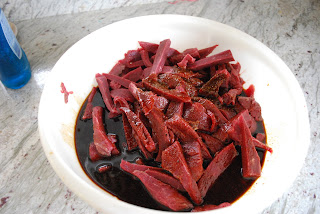 Then I put them in the dehydrator for 6 hours.... 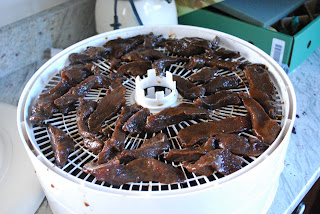 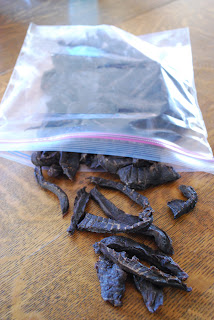 So I guess its not TOO much labor other than fat and fascia picking, but time consuming?  Very much so.  I dread doing the skull mounts and tanning.  That will be much more labor intensive.  Boiling heads, picking out brains, eyes, tongue, etc.  Hurrah, right?  And using liquefied brains to tan the skins...  I've got quite a bit of work ahead of me in weekends to come!