Let me preface this post by noting that Q had some major firsts this ride, all very exciting, but I have to say my favorite of all these firsts - the one I was most excited about - was the fact that she peed under saddle. I want to squeal about this to anyone who will listen, but anyone who is non-horse and non-endurance (or educated per endurance riding) just thinks I'm psycho for being excited about this. So, to get it out of my system:


OMGOMGOMGOMGOMG! GUYS! MY HORSE KNOWS HOW TO STOP AND PEE UNDER SADDLE!

A group from home drove down to Uwharrie Nat'l Forest in North Carolina on Thursday. Its a 7 hour trip with stops. Not a bad drive by any means. 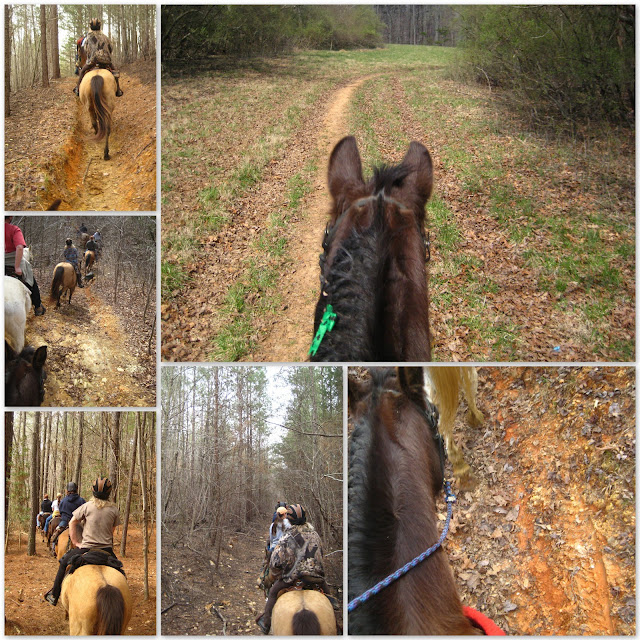 The weather was awesome while we were there. The first night was a little chilly, but each night after that was progressively warmer and the days were glorious. I rode in a long sleeve T on Friday and a T-shirt on Saturday.

We totaled somewhere around 30 miles between our two days and only got lost one day.

The pros and cons of Uwharrie [in the spring] as we experienced them:

+ Relatively short drive
+ Warmer weather
+ Great camping amenities
+ Southern hospitality from locals to help guide us along
+ Tons of drinking spots for the horses
+ Lots of trail options
+ Beautiful views
+ Varied terrain offering a little something for everyone
+ Well-maintained trails free of impeding obstacles
- A map that is outdated
- TWO maps of trails, actually, and one with a VERY confusing lay-out
- Trails are incredibly over-used and eroded as a result
- Trails exist that are not on the map
- USFS land and private land butt up against one another very frequently and are not always well-marked
- Prescribed burns were going on and several trail systems were closed as a result - not noted at campsite for heads-up

Overall experience? I'd give it a B.

We set out on Friday without a perfect ride plan. We had the more confusing of two maps this day. We planned to ride to the lake, and then try to make a loop and head back.

We made it to the lake like champs. After that? Anyone's best bet. We were good for the first hour. And then somehow we ended up on marked trails that didn't exist on the map (marked with the same color as other USFS trails, and marked with USFS markers WITH horses on the signs, too!). And then on private property. And then on a road. And then this REALLY NICE COWBOY came out of his home, told us to follow the trail around his pasture and he would meet us on top with his Kubota to direct us further. That helped...a little. We ended up BACK on a trail that was marked but not on the map. We made a lot of lefts to work our way back to "campsite territory" and eventually - probably by dumb luck - ended up back in familiar-ish territory.

A good time was had, certainly. But it was a little bothersome at the end for sure!

Saturday's ride went MUCH better. We discovered another version of the trail map that had a much more presentable layout. As soon as we didn't see a marker in a likely place we turned around and corrected our mistakes. I kept my eyes on the map like a hawk as did others. One part of the trail definitely was a little wonky, but there WERE markers the whole way and we didn't have any great issue. We had a really awesome second day of riding. This day I took my phone to track the ride. I missed the first ~ 4.2 miles of riding (mileages from the map), but captured the last ~ 9 miles with Endomondo. We spent about 4 hours or so out the second day which makes us figure we probably did close to 20 miles the first day!

- She completed all riding completely barefoot. The terrain varied from mud to soft loamy soil to rocks, but I'd say the majority of the ride was some degree of rocky. She took a couple false steps, but nothing of concern. Most of these missteps were on day one. Day two she was much more deliberate with where she placed her feet. I paid mind to her steps a lot and it was interesting to note the clinking and scraping of shod feet (everyone else in our party) over rocks while Q never clipped a single rock. Her footfalls were near-silent.

Another fun observation (my observations were not greatly surprising to me, but I did have fun experiencing things I'd heard to be true about barefoot riding), Q was far more sure-footed than her shod counterparts. The other horses were seemingly careless about their foot placements. They'd flop them all over the trail and frequently slip off of small rocks and sticks, and on the steep embankments (the trails were gullied out in places from over-use and erosion) they would slide around significantly more than Q did. As with her missteps, she slid around more the first day than the second.

Oh, and she climbed up on this boulder for me without hesitation. It was all:


Me: Oh hey, look, Q, a boulder!
Q: I see that.
Me: Lets stand on it for pictures.
Q: Well, okay, if you insist.
Me: Now, now, we're not going to walk off the front of it.
Q: But I thought you wanted to clamber off it like in all your rock climbing photos.
Me: No, this is fine. Just stand and smile and pose!
Q: Well, okay. Silly human.

- She LAY DOWN in my presence! On the high-line to boot! I have NEVER seen this horse lie down for the sake of lying down EVER in my time owning her. She did it both nights after riding. And yes, duh, I took pictures.

- GUYS, SHE PEED UNDER SADDLE! It was day two of riding. We were probably two-thirds of the way through our ride. She'd been drinking like a champ the whole time we were there. We stopped to let all the horses eat [green] grass in a field for a few moments. She ate, we were all talking and shooting the shit. The next thing I know, I hear the tell-tale sound of a horse peeing. Huh, that's strange, I thought, it sounds like...OMG. THAT'S MY HORSE!

So, I praised her lavishly (obv), squealed in delight that she was doing this, and remarked that someone should take a photo because this was a big moment. They all laughed at me. -_-

But seriously, now I don't have to worry during rides about her not peeing/peeing because of me riding her. And I know for a fact that she will drink on the trail like a champ when she needs it. I knew she would eat and poop. NBD. But its so good to know she'll do the other side of things, too.

- Overall? Q's personality is finally starting to come out a lot more. She's starting to put her trust in me and come out of her workaholic shell. Up until this trip, she's very work-oriented. She lets me fiddle with her to my heart's content, sure, but she's never very personable about anything.

I can tell she trusts me more because of the whole pee-under-saddle incident. Additionally, as a whole, when we are away from home and away from her friends, she really depends on me more. I become her herd and she always nickers and whinnies at me in the morning or when I prepare food or anything for her. When we all let our horses hand-graze in the little grassy paddock at the campground (okay, so we may have just dropped all their lead ropes and let them mill around) she chose to follow me around rather passively the majority of the time. We even had several moments throughout the weekend where she put her head in my arms or rested it on my shoulder while I scratched her.

The weekend was a really incredible stepping stone for my whole relationship with this horse. I had a blast.