A stellar ride on G-man

I had an absolutely stellar ride on Griffin on Sunday.

I'd originally hoped to get in around 7 miles with him on Sunday, but I wasn't feeling great. I almost didn't go to the barn at all. Knowing Q needed her supplements at a minimum though, I mustered up some strength and sucked up being a wuss and headed out.

I brought both horses (who both trotted up to me in the field!) to the barn and fed them. I applied Q's scratches medication (omg summer scratches are so worse than winter scratches!) which she was well behaved for, and toyed around with her saddle/saddle fit/testing back soreness (because the post I'd written and my conversation with Karen was fresh in my mind). She wasn't responsive to a single poke or prod that I did along her back. I even went so far as to see if she would be cinchy about it if I tacked her up as she sometimes gets cranky with me. However, per the norm if I am a calm and not rushing, she stood with floppy lip and ears lazily swiveling around her. Still not ruling it out completely, but definitely putting that potential pain trigger behind other options. (All will be assessed with vet on Monday.)

I loosed Q into the field after this and turned to look at Griffin who had been patiently waiting tied this whole time. "Alright little man, time for you to go to work at your job." *ear flick*

I tacked Griffin up in the Ansur setup + breastplate and crupper, dialed into a Decemberists album on my ipod/earphones and we headed out.

Griffin set off at a nice little trot, both hesitant to leave and eager to see what was around the next bend. Once we were into the woods, he focused in on working a bit more. (Just like Q does. Woods = work. Back field = potential to still go back home in their minds.)

He trotted the whole way, walking through slick muddy areas when I requested, cantering as much as we could. Up, up, up through the woods, avoiding the haul road trail due to its full-sun exposure and rockier terrain. (Griffin's feet were a bit more tender following a rain event.)

We leveled off along the first ridgeline, trotting the good bits and walking the tricky ones. We galloped full out up a short 100' long stretch of hill, leveling out again for a time. Griffin showed me his expertise with this trail and his interest in his job by going along on autopilot and choosing to make the tricky 90° turn on his own accord without encouragement from me. Good boy!

We walked through a muddy downhill section, and Griffin picked up the trot on his own as soon as we reached dry, level footing. We trotted and cantered all the way up the next mountain with gusto. Griffin's eager ears leading the charge.

At the top of the mountain, finally into mature forest with clear understory and beautiful trails, we trotted more. Griffin decided in this section that he was tired and thought it was time to go home. He tried to stop (slowly not rudely) and turn for home a few times, but I made him go onward. I respected his decision to want to be done, but made him go a bit further until such a time the decision to turn could be all my idea, not his.

He gave up his "go home" requests and focused on power walking the last STEEP climb to the apex of the mountain. I turned him around for home half way up. He seemed surprised at first, but then settled into his homeward trot once we'd leveled off of the mountain. 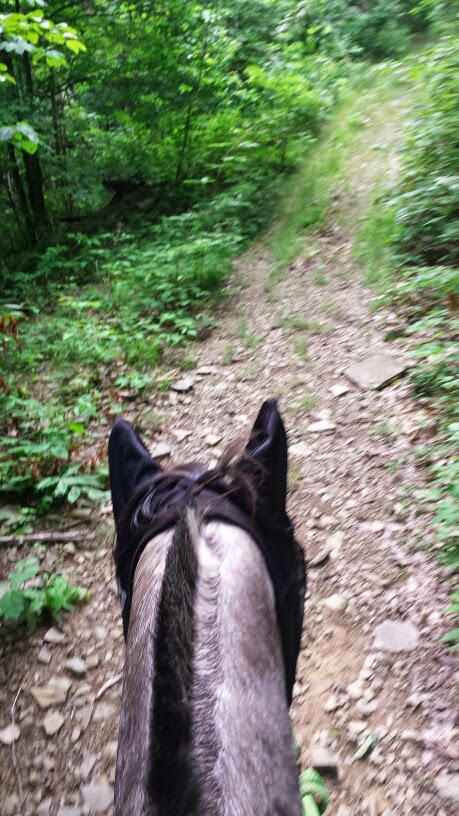 I don't advocate "running home", but if we've been trotting/cantering most of a ride, then maintaining that gait in the homeward direction is completely acceptable. Griffin definitely has a bit more spunk to him when he knows we are going home (different from Q who just maintains no matter what direction we're going once we're *away from the barn*).

For a youngster, Griffin handles himself EXCEPTIONALLY well on downhills. Never once has he pulled the move I see so many youngsters doing, serpentining the downhills, confused at how to best navigate the terrain with a rider. Griffin just strikes out, strong and steady in a straight line.

We walked the steepest bits and the muddy bits, and trotted the rest, breaking into a canter for a few strides here and there where it was best. We backtracked our trail through the woods exactly as we came on the way back. Griffin demonstrating his knowledge of the trail time and time again on the way home, choosing to make the turns before I guided him toward them. He picked his pace well nearly the whole time, too. Such a good boy!

At the last major downhill before the homestretch, I dismounted. I ran down the hill (hello rider fitness) and let Griffin trot fast behind me. He got overeager and sped a little too far forward outside of His Box a few times, but with a "WHOA" from me, he checked his speed and went back to His Box.

At the base of the hill, I mounted back up and we went the last little bit through the woods, circling wide around the property to add a little novelty to the end of the ride. When we finally re-entered the back field, we hand galloped across it - a first. Griffin was completely content, happy ears, and in control during this hand gallop. I was so impressed.

Crossing the creek, he chose to go right into a 2½ foot deep section, ducking his nose for a few sips as he powered through.

We trotted right up and into the barnyard on a loose rein, halting perfectly under the barn awning where I gave him lots of pats for being such a good boy.

We came in hot to the barn because I wanted to see where his heartrate was and how fast he'd drop. Almost immediately after dismounting, with girth loose, but saddle still on, he was at 88. I untacked him the rest of the way, sponged and scraped for 7 or 8 minutes and checked him again. He was hanging right around 68-70.  Not too bad for a horse who really doesn't have a huge fitness base right now. It was good to gain that baseline, and I look forward to watching it (hopefully) improve in coming months. 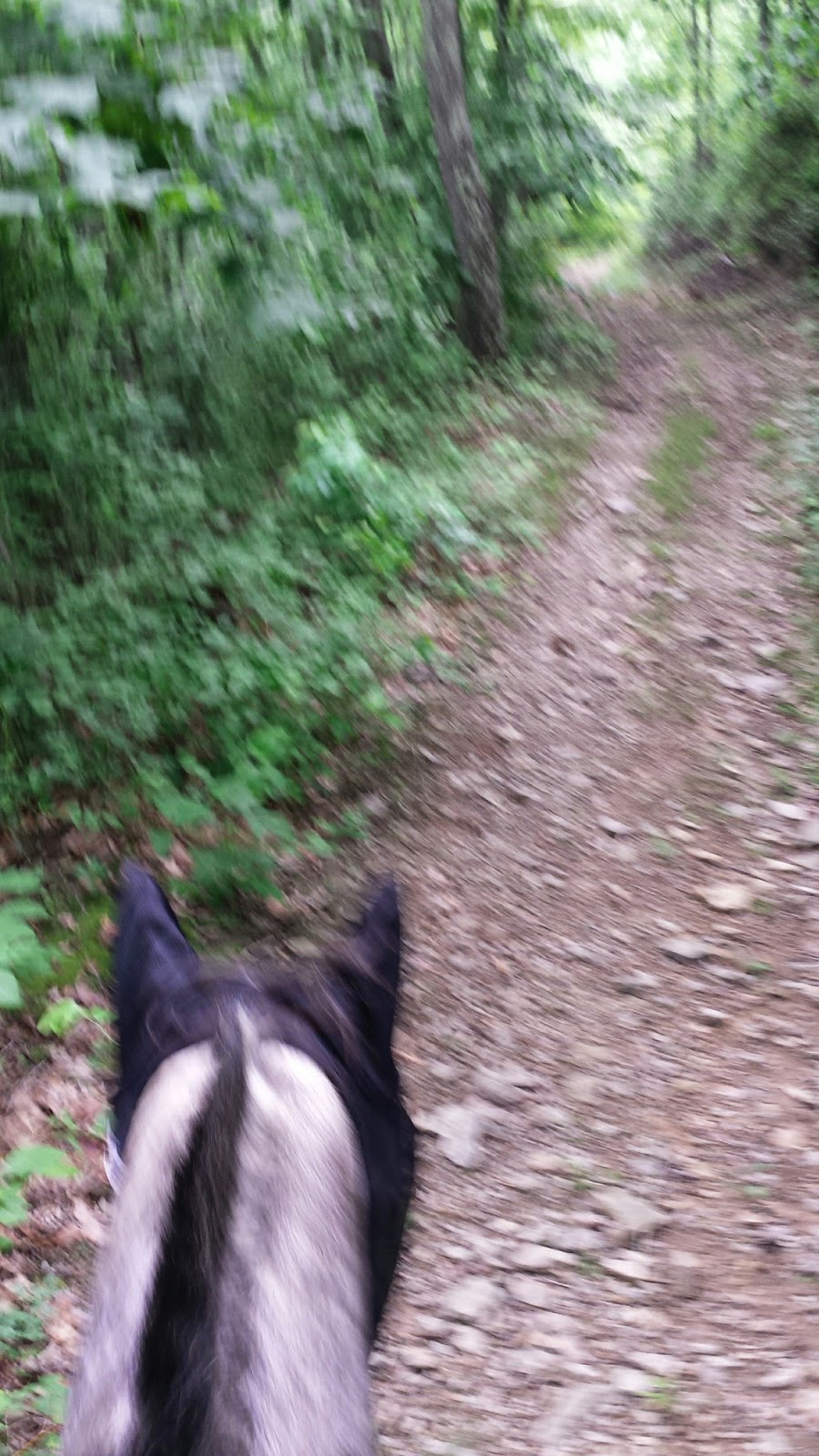 I had so much fun riding him. His gait is so different from Q's lofty gait, which was odd for me to adjust to riding after my recent 50. Griffin has a much shorter stride. Much smoother. His super fast trot isn't hard to sit at all. His canter needs the most work.

But more than his gait and the fun I had adjusting to it, I loved his work ethic. His eagerness to move forward down the trail with minimal guidance on my part. I bumped him a little to the left and a little to the right to help guide him through areas of tricky footing, but beyond that, it was all him. He was eager to try to please my requests every step of the way.

I was able to kind of "check out" mentally as we went along after 2 miles or so. My music took over my thoughts, and my muscle memory and subconscious took over my actions guiding Griffin as I needed. I let my right brain do the work for once, pushing my worrisome left brain out of the picture. OH, how I wish I could do that on every ride! Just RIDE and let myself do what I know I can do instead of thinking so much about every tiny thing. It was great to have a ride where I was able to do that; hopefully with time and miles I'll be able to do more of it -with both horses. =)
Posted by Liz Stout at 10:15 AM