Mel does In Real Life (IRL) training posts about once a month for her horse time and her running. I adore these posts because I very much enjoy the tedious tracking of all my training pursuits, too. It is very interesting to me to observe similar training by another. And now, I'm motivated to do one of my own that encompasses the past several months.

I love numbers and statistics as they relate to training pursuits. It is why I have always made an effort to track significant training rides. Whether or not I have a plan for my rides, I take great joy in reviewing the number stats on total mileage (from a single ride, a week, a month, a year), average speed, and my mile split times. The app I use calls out my splits after each mile; this allows me to learn what to expect from certain terrain, certain gaits, certain weather conditions, time spent correcting tack or boot issues, etc. I have a much better idea of distances and speeds as it relates to so many factors that play into a ride as a result. Awareness of distances and speeds as they relate and are impacted by environmental factors at hand is becoming more of an unconscious sixth sense for me now, which has endless benefits for future pursuits where I may not have a tracking device beyond a start time and end time.

I use the Endomondo app with great success to track my rides. Until November, I would only track my significant trail rides. Now, in an effort to accurately track nearly all of my riding time, I'm tracking everything - even the flat work and jumping work in the back field and short rides around the property.

I'm VERY close to my goal of completing 500 miles this year. Truthfully, I have very likely already ridden > 500 miles, but I didn't track a lot of small rides (1-3 miles) on Endomondo until November. All the same, the numbers game is fun motivation to get out there and ride, even if it is just for a short time! Every little bit counts, and the big picture at the end is really satisfying, even if it was built from many tiny pieces.

Since June - immediately after the OD - I've been tracking every, or nearly every, visit to the barn in a journal. I wanted to keep a log of how my mindset at the time of arriving at the barn might be affecting Q. I'd note my mindset, emotions, feelings, and also note her behaviors. I continued that for about 2 months, then Q and I became better at dealing with one another, so I ceased logging every tiny detail. Tracking mental and behavioral things between hormonal ladies is beneficial, I find. Haha.

Supplemental to tracking mental and behavioral things between us ladies, I also noted all training things with both horses. Type of exercise, duration, and distance/average pace when applicable.

From that journal, I can throw together another table of mileage per horse per month. If you're paying attention, you'll note that some of these mileages exceed the total mileage in the figure above. This is due to other people riding one of my horses without a GPS and without my accompaniment, however they were on a trail I knew the mileage of, so I was able to note the mileage. 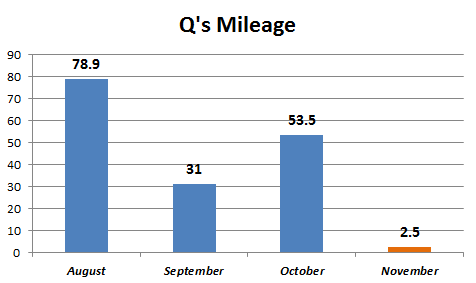 It is interesting to look at her mileage totals when you think about the races we did. Without the 50 in August, she'd be at 28.9 miles of training rides (that were tracked). She was ridden significantly more, though those rides were flat work and jumping.

The October mileage would only be 3.5 miles without the 50, but it is important to note that that 3.5 was our warm up ride the day prior to the 50! Q was ridden on two other occasions in October on the flat - cross training, no trail miles! 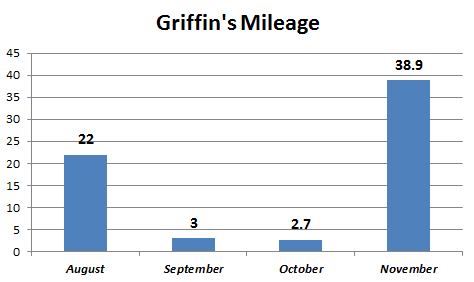 Griffin attempted an LD at the beginning of August, proved his mental instability, and then had time off where we did a lot of ground driving and work with the cart (none of those miles tracked) through the remainder of August and all of September. The cart work would have continued into October, except the wreck happened at the end of September.

Griffin was ridden a LOT during October. We also had a fair number of rides in September! From September through October though, I only tracked two brief trail rides. All of the other rides were flat work and cavaletti/jump work. These rides began with 10 to 15 minute sessions and through the course of 2 months they advanced into hour long sessions. By November, I'd resolved to track EVERY RIDE. He went on two ~6 mile rides, one ~7 mile ride, and one ~9 mile ride in addition to several smaller rides during November. We really had a slow, steady building of ride time and not the huge spike represented by the graph (4 additional rides in September and 6 additional rides in October). But I'm too lazy to type up my entire journal for this blog to fully detail each of those rides. #sorrynotsorry


It's been a pretty great riding year, even with all of the bumps and hurdles along the way!