Jolene and Her Trailer 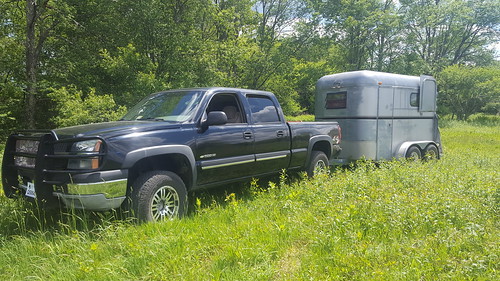 Meet Jolene and her trailer.

At long last, this post closes out a saga I've been wanting to tell for a long time.

At the beginning of February, I bought a trailer. While I wanted to crow my joy to the world about this huge step in my equine life at that time, I held off. Why? Well, succinctly as possible: I was in the process of moving to Canaan, had a vacation upcoming, work devolved into a total shitstorm (and has only built in strength since), I wanted to get the horses moved before sharing, and then I began truck hunting. Thus order to not complicate the storytelling or jinx the truck hunt, I opted to wait until most of these events found some sort of resolution/conclusion.

When I began trailer hunting, I had several definite criteria: I knew I wanted a two-horse bumper pull, I knew my budget and knew I wanted something in solid used condition, and I knew how far I was willing to drive to pick up a trailer. I also limited myself to smaller two-horse trailers that did not have a dressing room because I simply wasn't certain what kind of haul vehicle I'd end up with ultimately.

Because I had hauled with a two-horse bumper pull with mangers for the past 4 years, I began looking at those. Knowing the cons of a trailer with mangers though, I switched gears and started exploring other two horse options that would be more comfortable for the horse.  I perused copious ads online, interacted with multiple sellers (and scammers!), and ultimately ended up with this 1994 Valley TB. 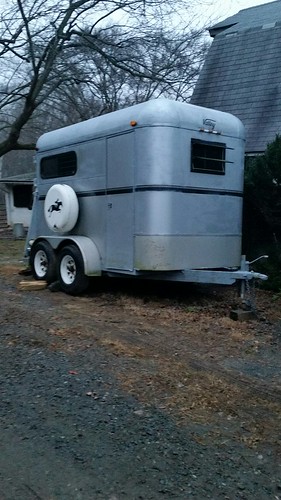 It is in great shape structurally and should serve me very well as a first trailer. The worst thing about it is that one of the hinges (there are three) on the ramp has some significant rust. The hinge has been "bandaged" for the summer by a local welder and will be fixed in full in another couple months (it is totally safe for the horses right now, I just want to get it resolved before it becomes a bigger issue down the road).

I plan to give the trailer a fresh paint job later this summer to really freshen it up and put a stall on the inevitable rusting that occurs due to my climate. I also plan to install several hooks and bars for storage of bridles, halters, and saddle pads and hopefully some over the door hangers with zippered pockets for grooming supplies and other small odds and ends. Other larger items will be hauled in the truck. 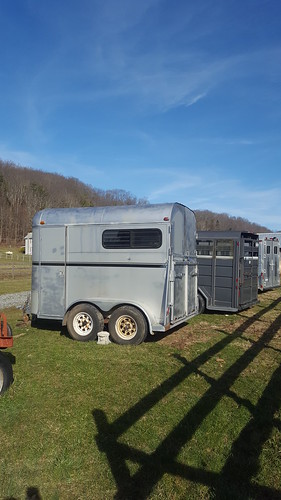 I've loaded each horse on the trailer already with very minimal issue. They were each wary of the ramp at first, but once they realized it was just a part of the trailer, all loaded much quicker and more easily than they ever did on the step up we'd been using. I've always wanted a trailer with a ramp and I'm glad my horses approve of that decision. I'm certain they will also appreciate the more airy nature of this trailer compared to the shorter, stuffier trailer we've used in the past.

I'd like to say first and foremost: I hate car shopping. Especially used car shopping. I don't enjoy wheeling and dealing. I'd rather spend money up front to avoid hassle and haggling.

I was spoiled when I bought my Subaru a few years ago because I did so through the Subaru VIP program. This program is haggle-free. Essentially, those with access to the program design the car they want, tell their dealer of choice who participates with the program, and then you just sign the necessary paperwork, provide a down-payment, and wait for the car to arrive. I dreaded truck hunting because I knew it would be a far cry from this experience.

I started my truck hunt by enlisting the help of a friend who knows trucks very well and buys a LOT of vehicles at a wholesale auction every year. He's got capital, knowledge, and man power to turnover these vehicles after fixing what are usually very minor problems. He also LOVES wheeling and dealing so the whole process is quite a fun side business for him.

I paid him a small fee to help me find a good truck that met my budget and my criteria. About a month after we spoke, I had a truck. A 2004 red Ford F-150 with 57,000 miles. It had originally belonged to an older gentleman who had passed away; it then sat idly for a few years until ended up at auction. It was in great shape and passed my buddy's mechanic's inspection beyond noting that there was some more advanced rust in places. He told me he's personally driven much worse and had no problems. 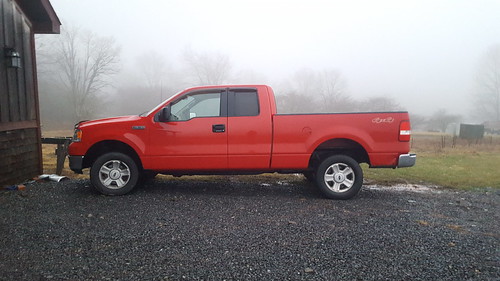 But the rust issue ate away at the back of my mind. I just couldn't risk putting the truck through it's paces hauling my horses without being absolutely certain it was structurally sound to handle it. I refused to risk the safety of my animals.

I shared with a few people that I was thinking about selling the truck and getting something with less rust. Remarkably, of the three people I told I was selling the car, one mentioned it to a friend who mentioned it to another friend who was very interested. And that's how I sold a truck I'd had for 2 weeks to the first buyer interested without every writing or posting an ad. I also profited handsomely from the deal because I bought the vehicle for way less than it was worth originally.

My friend who helped me get the truck informed me upon it's sale, "That's hustlin', baby!" That it was...I'll never get lucky like that again!

And so from there I spent another month scouring cars.com and CarGurus for better options. I also enlisted help along the way from several gearhead friends: a mechanical engineer who works for Cummins, a US military (multiple branches) trained mechanic, and an encyclopedia of truck knowledge who is active in the horse-world. The knowledge and advice they lent me guided and honed my truck hunt.

There were a lot of near misses. So many potential options that I almost went to get. But each time I thought I'd found "the one" something would happen to prevent it from working out. When I finally found what I thought was "the one" and told the dealer I would be there the next morning, early, he called me back 45 minutes later to let me know he'd just sold it to someone else. This was the icing on the cake to what had been an exceptionally SHITTY day for me. I threw my hands in the air in exasperation and declared NO MORE TRUCK SHOPPING FOR A WEEK.

Yeah. That lasted about 15 minutes. I cooled off and cautiously started looking again. And then I found her. A 2003 Chevrolet Silverado 1500HD originally from Texas with a nearly spotless CarFax, no rust, a mean brush guard, and overly-aggressive tires.

Laughing to myself, I forwarded the ad to my engineer buddy, "Look at THIS bad boy"
"I mean, I might go get that?"
"lol like now?"
"I like that truck a lot."
"If it's still there on my day off, I'll call, and if it passes all of my tests, I'll go get it."

Well, it was still there on my day off, passed the tests, and I got it. 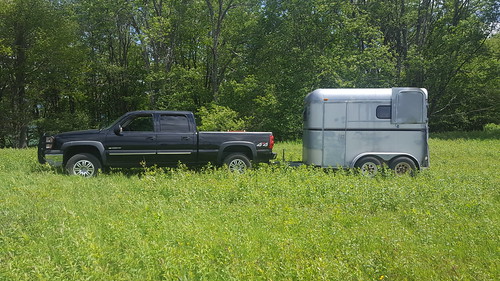 Turns out, this dealer specializes in heavy duty trucks. They've been in this business for 38 years and tend to get almost all of their inventory from Texas because they know east coasters try to avoid shopping for used vehicles with lots of rust. The only reason this truck was within my budget is because it has a lot of cosmetic blemishes, so they listed it for much less than they had originally planned. Win for me!

It's a meaner truck than I ever thought I'd get. I still giggle every time I see it in the driveway.

The first of my friends to see me driving the truck just started laughing and shaking his head. He gave the truck a good once-over, grinning, and then looked at me and simply said, "Angry!" Yep. Pretty much. Angry. And the fact that little ol' me is driving it? Ridiculous.

I'd joked with a coworker when I originally found the truck that if I ended up getting it I'd name it "The Texan". However, I couldn't help but want a more feminine truck name for the big girl, so in line with being from Texas, I decided to choose a very country sounding name: Jolene.

For the first time in my horse career, I have true freedom. A capable haul vehicle and a trailer that I own and am not borrowing. While incredibly grateful for the borrowed trailer and my 4Runner over the past 4 years, I'm so happy to have a more solid setup now. I anticipate I'll upgrade to larger trailer eventually, but for now, this little one will serve all of my needs.

I'm eager to dive into my competition season with TWO disciplines this year now that I have the ability to do so. I've penciled in 4 HTs, 1 dressage schooling show, and 1 LD for the year. I also am looking forward to taking some lessons (dressage and jumping) with a local-ish Centered Riding instructor once or twice a month. So many exciting experiences I've always dreamed of loom on the horizon! Cheers to a great season.

How about you? Do you have your own truck and trailer? Did you suffer through the shopping for them or do you enjoy the wheeling and dealing thrill of the hunt?
Posted by Liz Stout at 4:44 PM

- Has been a part of my life since 2005; became mine on July 31, 2016
- Is the first horse I showed and the first horse I tried endurance with; he's my OG, my first heart horse, my ol' reliable, and now makes the perfect husband horse