Deconstructing the why/when behind a spook isn't the simplest of tasks when you've got an intelligent, highly opinionated, incredibly stubborn pony mare. [Un]Fortunately for her, I'm just as stubborn!

Step one was scratching the treeless dressage saddle. As much as I adore that saddle and the contact and connection it provides for riding, it does jack shit so far as helping me stay aboard during a Q-spook. Since Q has been back under saddle, we've been riding exclusively in an Abetta western saddle that had been gathering dust for years at my BO's barn. 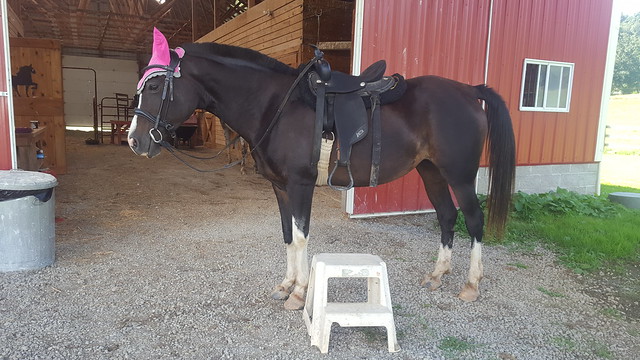 The saddle is an inch too small for me, but that's fine for now. It's a great interim saddle that provides what we each need in this part of our training: security for me and consistency for Q. I feel secure that I won't fall off during one of her spooks, and Q has more consistent riding from me because I'm not tensing up as often in fear of falling off.

Step two was taking things slowly at first, doing what I could to provide Q more time to process the world before she worked herself up to the point where she would spook. I spent a week and a half stopping her and feeding her a peppermint from the saddle. This refocused her mind on something pleasant while allowing her more time to process things.

In no time at all, she was much calmer during our riding sessions and the peppermints weren't doled out as often. Simply halting when I noticed her starting to get tense was enough for her to calm herself so we could move forward again. She began to anticipate being asked to halt and figured out very quickly that the right answer was to relax and not move her feet. 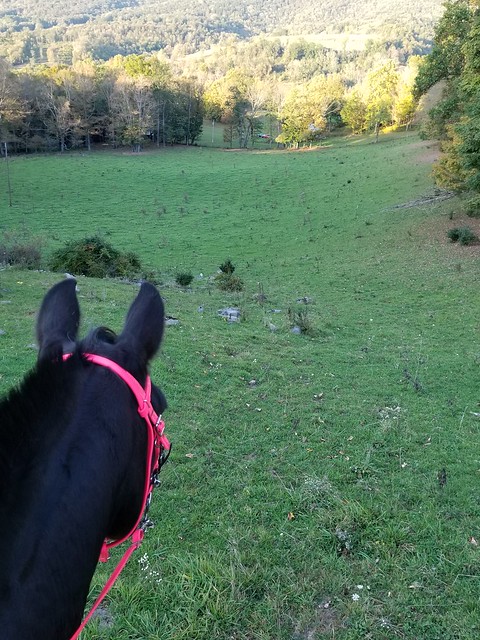 Slowly, we started adding brief trot sets. It started as just a few strides and evolved from there. The transitions to a walk took the place of our halts to refocus her fretting mind when it emerged. She would still give things the stink eye and throw out a spook maybe once a ride, but by and large, she was improving and learning.

Working Through the Wiggles

One of the biggest things I noticed bringing Q back into work under saddle was how freaking wiggly she is! Griffin and Stan are both so solid and straight feeling. Not stiff-straight, just focused-straight. Q wiggles throughout her whole body bending like this )) and then like this (( constantly as she looks all about. She is just so fluid compared to the geldings! 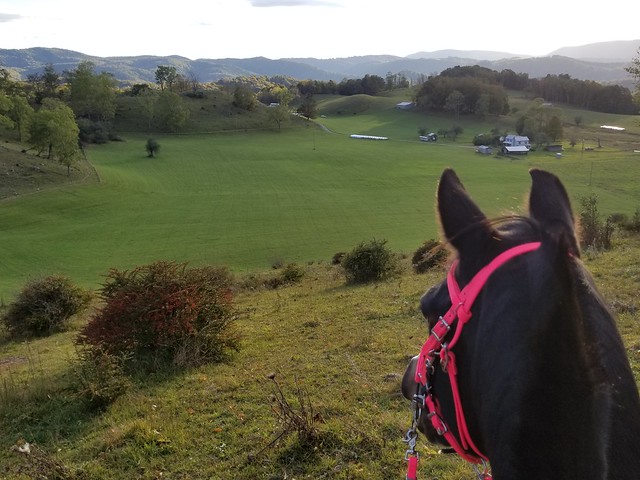 I began noticing that those wiggles would increase during the trot. I also noticed that they would often become exacerbated right before she'd offer a spook, so I began asking for a downward transition right in those moments. After repeated downward transition, Q would settle and relax and wiggle less.

Deconstructing the Whens and Whys

During the first few weeks of riding, while spooking wasn't common, it wasn't absent altogether. I'd end up riding one minor (for Q) spook every 2 or 3 rides. Fortunately, thanks to the western saddle, I hardly budged.

I began noticing that Q would spook the most at the beginning of a workout. One particular board was cause for a spook right as we left the barnyard (200-feet into our ride) and the burn pile right before the creek crossing (500-feet into our ride) was the second common spot. As soon as we crossed the creek into the field where I work the horses, while she'd be on high alert, give things the stink eye, and high-step a wide berth around suspicious grass, her full spooking behavior was rarely offered. 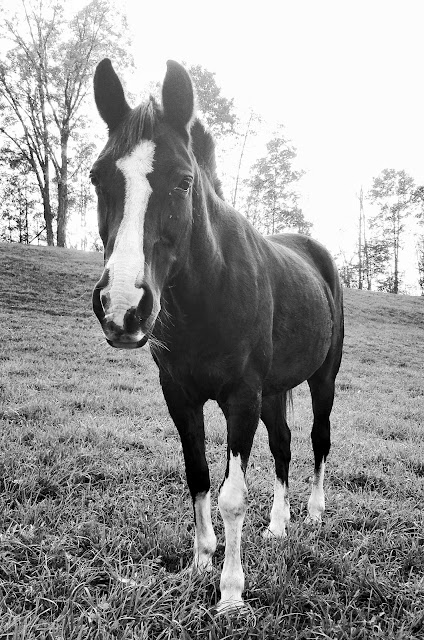 Over time, the two sticky spots at the beginning of our rides became less sticky. I made sure to sit tall and centered for these areas, and Q would sometimes look at them, but the spooking ceased. She returned to her behavior from days of old, picking up a swinging, marching walk as we headed to the field.

Some days we'd get through whole rides without any spooking. Other days, she'd present balky behavior but nothing more. How novel! Progress indeed.

A New Problem and a Breakthrough

However, progress means new problems crop up as old ones disappear. Progress in this case also meant that our rides grew in length from 20 minutes to 30-40 minutes as time went on. Q's patience for work and being away from her friends (OMG!) grew thinner near the end of our slightly longer workouts. She began spooking at the end when she thought we should be done but I deigned otherwise. Shame on me! 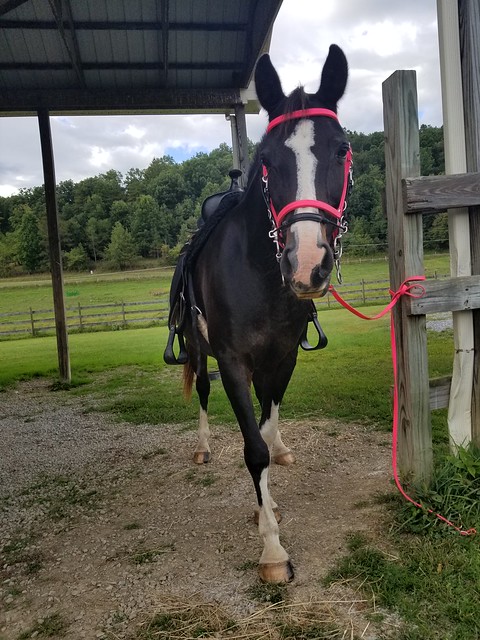 See, I know she's herd-sour and loves her friends. It's always been her MO. If I'm riding at home and can get 1-2 miles from the barn, she settles. If I haul out, she's always better. The gravitational pull toward the herd when we work in the field adjacent to them is nothing new. Knowing this, and knowing that she's much more forward marching in the direction of the barn (and the end of a workout), I always try to add small easy tasks (serpentines, circles, halting and backing, halting and waiting) as we wrap up to assuage some of her urges to be done. right. now.

One day, Q really thought we were done. We were definitely heading that way, but I never want her to think her decision to be done with work is the reason we quit. We can stop because she's been exceptionally good, but not because she is ready to be back with her friends. 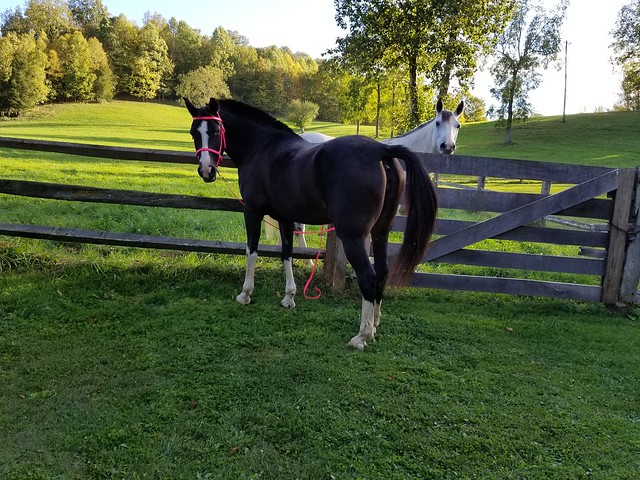 So when I continued making her do the walk-trot intervals we'd been doing instead of turning fully toward the barn to call it a day, she tossed me a huge spook. I didn't budge or change my tune at all (funny how spooks are easy to ride when you're already riding properly and not anticipating the spook). Well, Q was PISSED. She pinned her ears, snaked her head, and slammed her forefeet into the ground with more force than she'd done moments before as she trotted.

I roared with laughter. Sucks to be you, Q! Life is so hard when things don't go the way you want them to. Woe is the life of a fat pony mare doing work that doesn't even cause her to break a sweat! 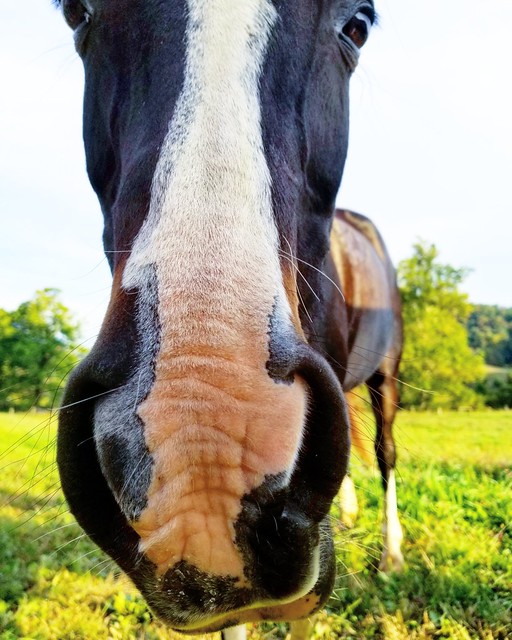 From that moment on, I noticed that Q was more liable to spook when she had an opinion about work that I didn't agree with. I'd ask for something "hard" or "complex" (air quotes because these are truly simple tasks like walk-trot transitions, circles, etc.) and she'd spook to try to get out of doing the task. I'd act as if she hadn't even spooked each time. The more I ignored her, the less she offered the behavior.

Having deconstructed her behavior to this point, Q began trying to seek the answer she wanted in other ways. I began noticing that she would often speed her trot up or try to break into a canter right before spooking. She would use the increase in speed as an excuse to spook. Upon realizing this, I introduced oodles of half halts into our workouts to check her before she wrecked us.

Suddenly I had a very fun horse to ride! She would still look at things, but she was doing it with far less frequency than she had been. She also really started to relax into the work and the environment, asking often to stretch her back during trot work - something she would never ask to do when she was nervous about monsters getting her. It was such a pleasure to be able to do multiple laps of the field without a single spook! We even reached a point where we could trot a whole lap without a spook - a true testament to our progress.

Conclusions and a Path Forward

While I'm a long way yet from having the horse I purchased in 2012 behavior-wise, we're definitely making great strides in that direction. The de-evolution of her spooking behavior in the time I've had her is 110% human error on my part. I'm grateful for the chance to resolve it and build our relationship back to a better place. Q's a hot, athletic little thing and I have no notions of her being completely spook-free, but I do have hope that her former dirty spooking behavior will evolve into something much more acceptable and that we will be able to enjoy our time together again instead of silently warring with one another lol.

Her confidence is a huge factor in this whole equation, but our slow reintroduction to work is helping her to build that as we go along - my plan from the beginning. The longer I work with her, the more I realize that she isn't the type of horse who appreciates being rushed in any sense. Keeping things slow will allow us to go "fast" later and allow Q to build more trust in me and confidence in our work. She's already interacting with me in ways that demonstrate success in this department, which is so, so encouraging.

We're a work in progress, but progress is evident. I'm looking forward to continuing our forward path together.

So how about you - have you ever deconstructed spooking behavior in a horse? What did you find? Did your horse only spook at certain times/certain places or due to certain stimuli?
Posted by Liz Stout at 11:11 AM