On the Trail Again

Friday the 13th, Q and I trailered out to hit up some nearby trails. It was a beautiful day, the colors were just past peak, and it was high time to get the mare off-property.

I didn't really have a plan on where to go - the options are endless! I could cruise the ski trails nearby or the ski trails a little further away, ride Dolly Sods wilderness area or other trails on National Forest elsewhere, or even a few trails on the wildlife refuge, or maybe the State-owned wildlife management area. Too many trail options is the best dilemma to have! 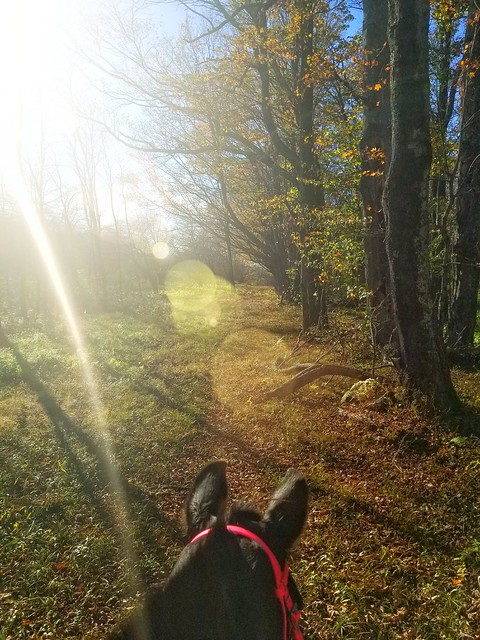 I ultimately decided to go with the closest option a whopping 4 mile all-uphill-drive from the barn, just past my house.

Q unloaded, looked about, and then stood calmly as if saying, "Oh, this again." I freaking love this mare away from home!

I stashed my keys, helmeted my head, and Q and I set off. 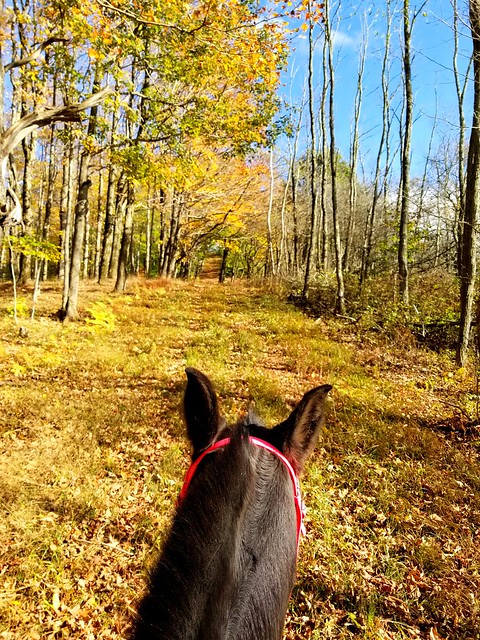 I kept the majority of the ride to a walk, just wanting to get Q out to see the world on trail solo again since we hadn't been out on trail since August 2016.  We did a lot of stopping to look and consider as we made our way up the mountain on pristine footing - nary a rock in sight!

The first third of our ride was straight up climbing. We gained several hundred feet in very short order, weaving our way through hawthorne trees and downed logs as we waded through goldenrod and wingstem that was as tall as Q's back (she's 14.1hh). 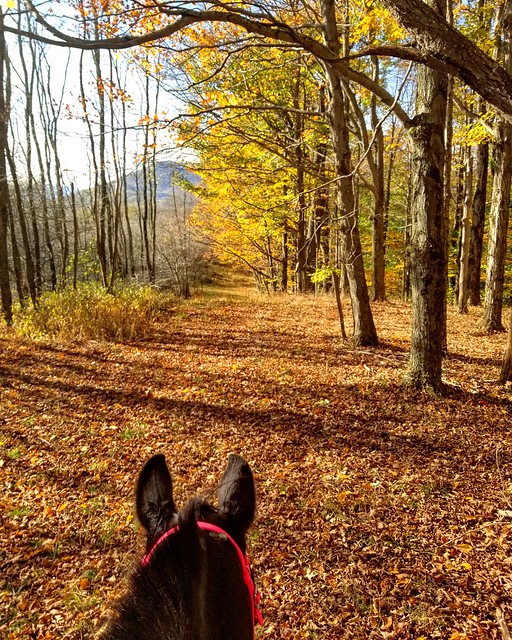 After awhile, we emerged from the wooded portion onto the partially mowed/maintained ski slope. Q hesitated a bit at this change in scenery, but eventually gave a big exhale and we marched onward at a nice 4.5 mph walk, enjoying the 100-foot bench that gave a short break in our power climb up the mountain.

Surprisingly enough, she didn't balk at all at any of the man-made objects in and around the ski slope. Blue barrels, fluorescent orange tape, snowmaking nozzles and guns and sticks - none of it bugged her.

As we climbed higher and I saw that the scenic chair lift was indeed operating, I opted to turn back down the mountain. I had zero desire to field tourist questions.

We wound down one slope, up another parallel one, and then down a third before traversing back to our original path. We trotted in very short spurts along pieces of the trails, but mostly kept to a nice marching walk. 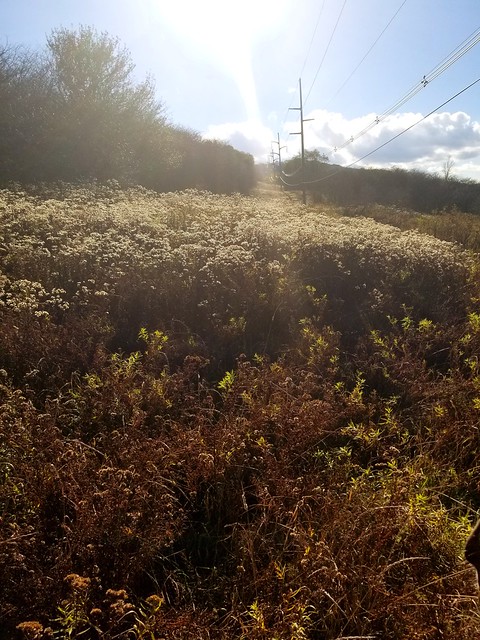 Back on our original trail, I opted to follow a newly mowed section to the bottom instead of bushwacking the tall vegetation as we'd done on our way up. I knew about where the mowed section would end, but had never traveled this exact path between the two points. I suspected I would veer away from the mowed path at the bottom to complete my circuit back to the trailer, though I didn't anticipate just how high and overgrown the area would be!

Nonetheless, I legged Q forward, off the mowed path and into the sea of tall vegetation topped with glistening seeds waiting to be disturbed and released airborne. 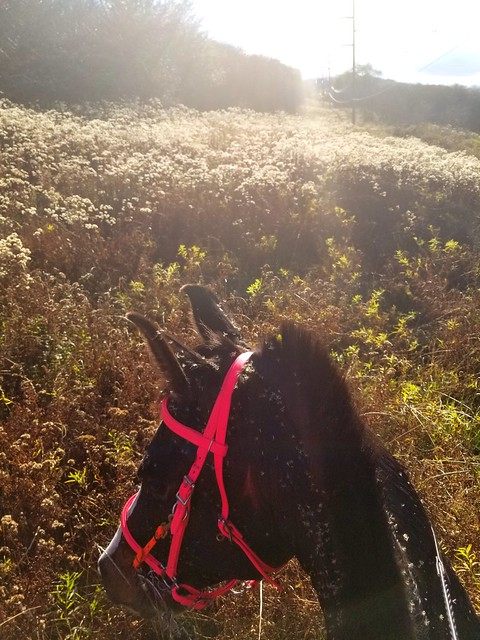 Different from the vegetation we wound through on our way up, these stalks were as high as Q's pricked ears! As we disturbed the vegetation, the seeds stuck to us and swirled about in the air.

It was absolutely comical to watch Q navigate through. She wavered back and forth from putting her head/nose low below the top of the vegetation and then way up above as she tried to gain a better vantage point on the seed swirling chaos around us.

I giggled endlessly, laughing harder when she finally started sneezing every 8 to 10 steps from the seeds in her nose. We were absolutely COVERED in the things! 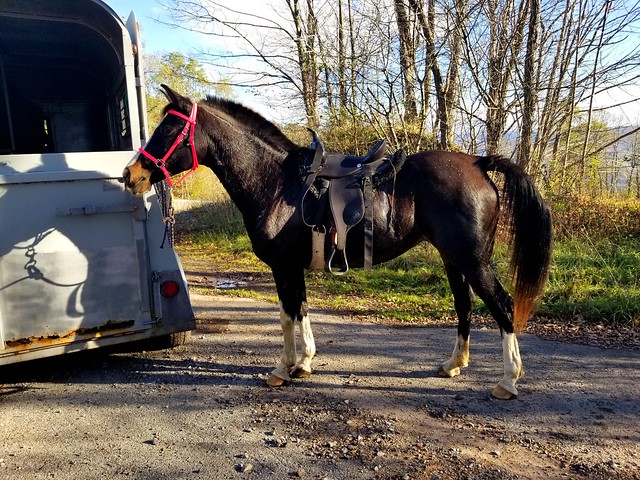 With time, we emerged from the chaos, crossed the road, and enjoyed trotting a nicely mowed trail back to the trailer.

All-in-all, we tackled 3.75 miles in an hours time, climbing somewhere around 900 feet during our venture. Q was hesitant at times, balked twice, but was otherwise a very good girl for the whole outing.

It wasn't much to write home about, but it was really nice to finally get back behind those dark ears on trail after so much time off. Hopefully we'll luck into more such ventures in the next few weeks before the snow really starts blowing.
Posted by Liz Stout at 11:11 AM