Since spring of 2016, I have hemmed and hawed about a new saddle for Q. While she may only be 14.1hh, she's got a huge trot stride more akin to a horse several hands taller. As we began to up our training in preparation for our attempt at the OD 100, maintaining that huge stride for miles over varied terrain during conditioning and endurance rides was resulting in girth galls around Q's armpit area.


A vet at the 2016 No Frills ride recommended a centerfire rigged saddle and thinner girth to provide greater freedom of movement through this area. I hadn't thought of that before, and agreed it was a good idea, but was hesitant to pursue any saddle change before the OD 100 which was coming up in a short 7 weeks. Ultimately, I played around with a few different girths and found a winning solution of a mohair girth with ample body glide application. This combination got us through the OD 100 with no issue.


Q had a lot of time off following that 100 and was ridden once before the 2016 RBTR LD where Austen competed her. I didn't fuss much with her tack for the LD because I knew that such a short ride wouldn't result in any major issues.


Shortly after the RBTR LD, Q came up lame, continued to be lame, and was diagnosed with lesions to her LH suspensory. She had a year off from work following the diagnosis, and when I did bring her back, we began with a western Abetta saddle to provide more security to me as I buckled down and dealt with resolving her spooking habit.


As I worked through rides last fall, I accepted that a treed saddle (as opposed to the treeless Ansur we'd been using for years), preferably with centerfire rigging, was in our future. However, knowing that I had no upcoming agenda for the mare, I wasn't in a hurry. But as all things go when you're not in a hurry, the perfect solution was promptly presented to me: 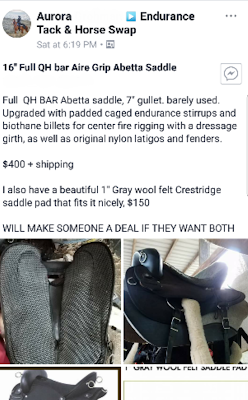 I resisted at first, my internal dialogue insisting how much I didn't need the saddle at that time. But as I thought about it more, I realized this was a really good deal and I'd be silly to pass it up! I knew Abetta would work for Q, even if only as an interim saddle; the size was correct for both myself and the horse; and the saddle was already rigged with the endurance upgrades I'd want to add myself. I slept on my decision and was pleased to see the Universe agreed with me in some regard as the saddle was still available. I fired off a message to Aurora, made the deal, and eagerly awaited the arrival of the saddle.

Since the saddle's arrival in late November, I've put in around a dozen rides with the saddle. Of these, two were flat rail trail rides, two were trail rides over terrain in the mountains, and the other rides were flat work at the barn. The trail rides sum ~45 miles and the flatwork sums a little more than 3 hours.


The time and miles in the saddle are minimal in the grand scheme of things, but the results so far have been great. Certainly, my approach to working with Q has been different during this time which accounts for a lot, but even with this consideration she's shown zero issue with regard to the fit of the saddle during this time. The quality of work she's offered me has been some of the best I've ever experienced in our almost 6 years together, too!


Her spooking during this time has been very minimal, and I have not witnessed any other behaviors that are indicative of some sort of ill-fitting tack. The saddle has performed well on both the flat and on terrain with only a crupper and no breastplate (though I do plan to get a breastplate before the summer). Bonus? The fit of the saddle works great for me, too, with no more modifications necessary. I also love having a saddle with so many attachment points as opposed to my Ansur that had none (I MacGyvered them all).


More time and miles are definitely needed before the verdict is final, as tack that works for short rides (<50 miles) very well may not suffice for endurance distances of 50 miles and greater. We'll see how rides go this spring and summer as our riding frequency hopefully increases, but things look quite promising and I'm really happy with the results so far!
Posted by Liz Stout at 1:11 PM