I did it.  I have him.  I didn't dream of it happening for another few years at the earliest.  But here I am today, the proud owner of a horse.  Gideon. 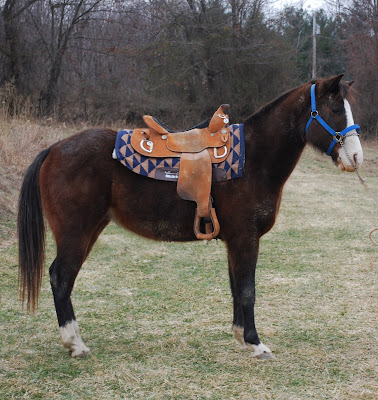 I've wanted one since I was five years old, what little girl doesn't dream of her own horse?  But instead my parents were too prudent about the whole matter and never bought me one.  They confessed years and years later that they had almost given in when I was six or seven, but worried I would grow out of it and didn't.  So here I am, sixteen, nearly seventeen (but not till Friday!), years later and I finally have my own horse!  He's an American Paint horse...but he's standard with his colors.  None of those flashing splashes of color that either of his parents had.  But he's more beautiful than I thought he would be from the description I heard.  As soon as he poked his head from around the building up on the hill I liked him.  He didn't have as bald a face (white) as I'd imagined - and he wasn't all black.  He's more of a bay and they say he when he loses his winter coat he becomes more of a grulla.  And four white socks are something I've always loved on horses.  He moves well too.  Just needs work.  Regular riding.  And he's going to get a ton of that. 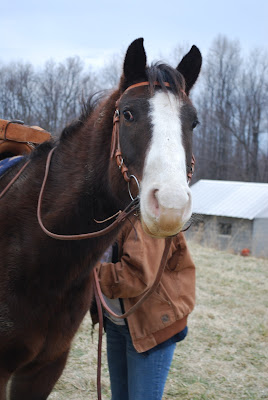 Its really starting to dawn on me the more time it sinks in...I have a horse.  My own horse.  I can do anything with him.  Any time I want.  He's mine.  Though he will very rarely ever be in a Western saddle again!  Haha.  I love my little English saddle.  He's kinda small, so I think he'll look better in an English saddle anyway.  Show off more of him that way.  I can't wait to get him moved to the new barn; learn some trails.  See what he's made of.  He moved well today; but I'd love to see him relaxed, not under spurs, just out there being a horse.  Running and being free.


It all seems so unreal right now.  I've wanted a horse for so, so long.  And now I have one.  Unbelievable.  I really don't have words to express how I feel about it all.  I can't wait to see where this new adventure is going to take me.
Posted by Liz Stout at 11:32 PM

Email ThisBlogThis!Share to TwitterShare to FacebookShare to Pinterest
Labels: horses