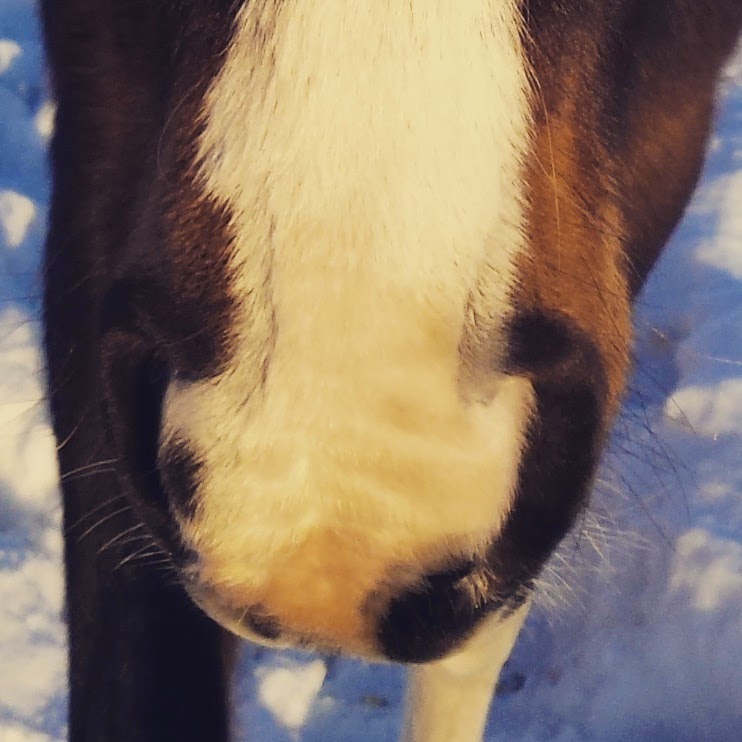 I'd had this grand thought plan in place that I would ride after work yesterday. The sun was going to be out by mid-late afternoon and I haven't ridden since my birthday, so riding seemed a good idea, no?

But then I got to the barn. The 16" of snow we received through last week and weekend has compressed to 12-14" of something resembling a consistency of styrofoam with a nice layer of ice atop. It's the kind of snow that gives you hope you'll be able to walk on top but then gives way and sends your leg crashing through at the last minute. Hmm. Lovely.

The horses were moving about the field slowly. The herd had created certain key paths to the resources they desired, and very few independent tracks branched away from them. It's very telling when the herd won't run amok and play much due to the ground cover!

The icy crust coupled with the last minute plunge of foot and leg into a post hole in the snow seemed a recipe for disaster as far as a conditioning ride went. Tweaked tendons and lacerations to sensitive skin from hard ice seemed a certainty! And thus, I scrapped my hopes of riding. The risk of injury simply isn't worth it.

The forecast doesn't warm much for the next week. It seems we'll be in a cycle of quasi-warm (enough to slightly soften/melt the snow) followed by intense cold for many days. It's the perfect recipe for further condensing the snowfall and then freezing it almost-solid! Bullet proof skiing, but crap-tastic riding weather when you need good footing across varied terrain.

What does this mean for my best laid ride season plans?

Could Q be ready for a 50? Maybe. Perhaps. Arab physio being what it is and whatsuch. Do I care to roll the die and test the waters and risk pushing this little mare too hard too soon after I've spent a whole season building up her confidence? No. No, I don't.

If crazy happens and things are going super awesome then mayhaps we'll try for the No Frills 50. However, I'm not going to shove myself into that cookie cutter when things may not fit. As things are, the LD looks far more attractive an opportunity at this time. It'll be better for Q's mental game, will play easily into where her fitness level is, and will keep our conditioning where it needs to be  - quite stress-free.

If we do the LD, I know I won't be pushing my little mare near or beyond her breaking point physically or mentally. It'll just be another building ride for her physical fitness and mental confidence.

Last year was such a bust for us mentally. She and I both experienced huge mental setbacks, hers due directly because of mine own.

My biggest goals for this year for myself and the horses are health and happiness. I'm more than happy to set aside any other goals within endurance to keep my horse in a better mental place right now. I think the LD in April may be just what is needed to help bolster her for a few 50s later in the year. Time will tell...the Universe certainly seems to be hinting at it pretty hard given the forecast I've been presented with that bars me from safely riding for a time! I'm much more keen on paying mind to the Universe, too, last year being what it was. ;-)