Q seems to be growing more of a brain finally. With added time and miles on trail, she's becoming much more reliable than she's been in the past. It seems as if I'm finally regaining the mare I brought home 3 years ago. I'm also unlocking more about her personality every day, and it seems I have a much more confident and sassy horse than I ever expected - something I applaud and encourage after worrying she was the polar opposite!

Of late, Q has been forward and confident on trail. She will give a wary look to certain objects, but by and large, she doesn't spook any more. At least not like she had been doing over the last year. The only spooking I deal with now seems to occur largely in new-to-her locations - and I'm okay with that.

Her default absolute-panic response is still to SLAM on the brakes and whirl around (always to her left), but the frequency of such spooking is much diminished. The whirling aspect of her spooks is also dropping in frequency, as well.

We had a particularly phenomenal 10.5 mile ride Sunday:

She was forward and eager to move out from the moment we left the barn. She knew she had a job to do and she did it. I was beyond thrilled. Every climb was tackled at a minimum of a trot, but often at a canter. She ate up the vertical like it was nothing!

After a brief respite at the peak of the hill, we'd resume trotting.

She put in a solid 4 or 5 miles before she gave me a legitimate spook. It occurred in an area she'd only been in 2x prior (both occurrences on the same day within 20 minutes of each other). Fallen logs on either side of the cleared trail were clearly a cause for alarm and she exhibited a hard stop from the canter with a moderate attempt to whirl to her left and run away from the perceived danger. 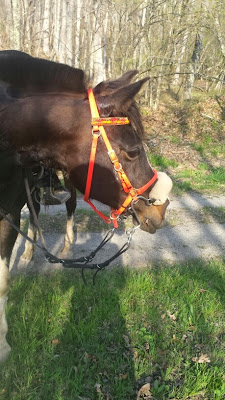 As Newton's first law dictates, an object in motion stays in motion, an object at rest remains at rest...unless acted upon by an unbalanced force. Well, I stayed true to the act of staying in motion while Q exhibited an unbalanced force and stopped. I somersaulted off her right shoulder and onto the ground, my eyes staying on Q and my hands which were clenched to the reins throughout my fall. No way in hell was I about to let go of the damn horse when there was chance of having to travel home on my own two feet while she fled pell mell through the woods!

Q staggered back a bit, eyes wide and shifting from the logs to me and back to the logs. I grunted and slapped her on the coronet band with my dressage whip in my frustration as I clambered gracelessly off the ground muttering under my breath and climbed back into the saddle with nary a word to her.

Settled in the saddle, I turned her toward the logs and the direction I desired to go and told her, "Little girl, you ought to be more scared of this rider on your back than those fucking logs," and popped her good on the rear with the dressage whip, spurring her forward. She rocketed up the trail, taking my suggestion to heart and placing her fear in me instead of potential log monsters for the rest of the ride. (I say fear and not trust because there isn't trust from this horse in tricky moments...yet. I think it will come, but right now I'll take having her attention on me instead of things she's worried about in whatever form I can get it. At least she's giving me attention where she used to give me none!)

While I still lost my temper, I'm proud of myself for not yelling at her or hitting her more than I did; anger is a tricky emotion and resisting the urge to lash out is very hard in the heat of the moment. Honestly, that little crack with the dressage whip was very minor and likely not any worse than getting popped with a stick as we wind our way down rough trail. Or even clipping a pole over a jump. Ultimately, violence wasn't the right answer, but I'm still proud of myself for only having that much of an outburst instead of acting on the fire hot anger I was experiencing in the moment.

Controlling my reaction proved to be the proper answer however, as I was gifted with a wonderful remainder of my ride.

We have begun trotting all of the easy-moderate downhills where the footing is good. In the past, downhills at rides have been our downfall (pun intended) as I don't train them with any speed at home. Even though we walk them in competition, Q's legs will be stocked up significantly more post-ride if there were a lot of descents.

Downhills are hardest on a horse's legs I've always been told. But they are inevitable in this part of the world. And for many of the rides I've done, if you can't move out on the downhills at some rides, then you're going to be suffering significantly to meet the time limit for the ride! Sometimes they are the ONLY places you can move out - especially at some of the OD rides.

The downs that we are training on are definitely easy in comparison to many downs. I'm still walking down everything moderate, moderate-hard. But I'm hopeful that pursing trot training on the easy-moderate downs will help to further strengthen Q's legs. And besides, it isn't as if I'm pursuing this type of thing on a horse who has no fitness base built! We're coming to a close of 3 whole years of conditioning for endurance at the end of this month! (Wow...) That is a good amount of time for her muscles, tendons, and bones to have build up in response to conditioning.

Through our 10.5 mile ride (which included some significant climbing over a short distance) we maintained a faster pace than ever before averaging 6.45 mph. The route we took was a new one and one that I plan to tackle again and again in the future. I wasn't going for time when we set out, but I do value the stats gathered from this first ride as they will be valuable to compare with future efforts over the same course. I love data and am always interested to see how rides on the same terrain change over time.