Spring Training with a New Character 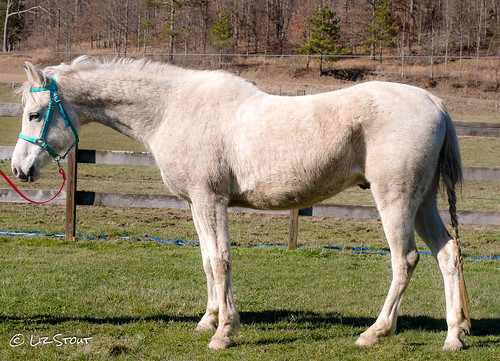 We thought we'd found her the perfect horse last fall, but after being strung along by his owner for nearly 3 months, things fell through. Lauren was pretty crushed at the time, but I knew if it was meant to be, it would have happened. The way things went down was pretty poor form on the owner of that horse, in my honest opinion, but c'est la vie sometimes. So I scoured the internet once again and sent ads to Lauren's mom for horses I thought may fit the bill.

Coincidentally enough - or maybe not so coincidentally as the right things always seem to fall into place - the first horse who passed the precursors to result in an in-person visit ended up being The One. Not only did he have good ground work, he'd been with his [former] owner for 9 of his 10 years, knows how to drive, has competed in 4-H shows with kids, and has completed one 30 mile LD. He was delivered to West Virginia the following weekend. 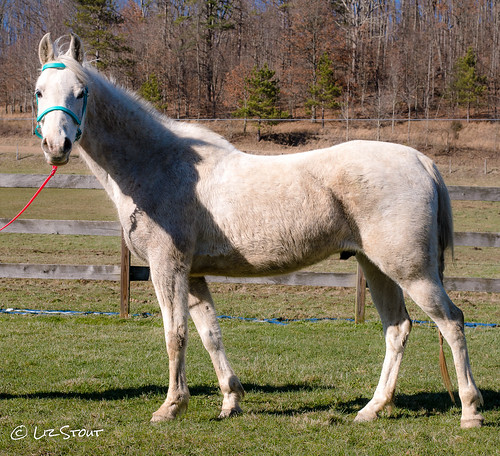 While the first prospect had proven breeding and training for success in endurance, I worried about the ground manners we would need to instill and develop. It's one thing to know your job of moving down the trail under saddle and quite another to be a good horse on the ground. The horse Lauren has ended up with gives me no concerns whatsoever regarding his ground manners. In fact, he rivals Griffin with his groundwork and may, in fact, excel over Griffin in a few areas. (I don't say this because Griffin is some kind of unparalleled groundwork genius, but because I have met few horses who have had as much time spent working from the ground as Griffin.)

In addition to impeccable ground manners, this little gelding has such an amazing mind. He has taken absolutely everything in stride without any major outbursts at all with regard to the work he's been asked to do. 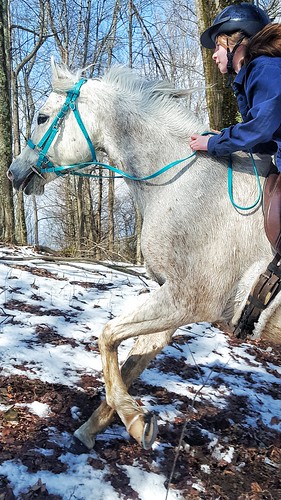 The only time he has shown ill-behavior was a result of too much pressure being put on him for too long during a round pen session. Lauren was treating him like Stan (who needs SO MUCH pressure in the form of body language and whip cracking to keep him moving and motivated) instead of like a sensitive horse. M snaked his head in protest at her continued urging and finally kicked out in her general direction in protest. Absolutely NOT cool, but also not completely malicious as he'd given warnings and asked and asked for the pressure to be let off. I hadn't been paying full attention during the session, but once I did I recognized quickly what was happening and noted my observations to Lauren.

I shared with her that every horse communicates differently and needs more or less pressure based on their individual personality and way of going. Stan is the most docile critter ever - especially around Lauren; it's due in part to his age, his breeding, and the fact that he's had little to no work the majority of the last five years. Griffin is definitely more responsive, but will still be sticky with someone who doesn't "speak the language" as well; if he can get away with being lazy, he'll take advantage of it. Q is as sensitive or more sensitive than M, and Q has been on full rest from her suspensory injury during a large part of my time with Lauren, so Lauren hasn't had an opportunity to work with a truly sensitive horse in the round pen before.

Lauren is a lot like me in that she learns best by doing or by watching, so once I shared my observations with her and took away the lunging whip, M's behavior resolved and hasn't returned! In fact, the gelding hasn't set a foot out of line with anything we've presented him with since then. 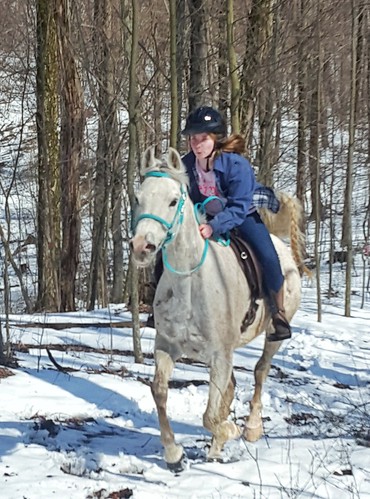 We went out on our first trail outing this past weekend, completing an easy 6 miles over an hour and a half. The trails are at peak muddiness, two grouse flushed from under foot, numerous downed trees had to be stepped over, one branch hit M full in the face, countless puddles with ice had to be crossed, snow drifts were traversed, and one mountain was climbed. Despite all of those things, M didn't set a foot wrong the entire time. He was a total doll. He even led for a short time on the way home and in setting up to take the riding photos here, he had to walk away from Griffin - which he did with zero resistance or concern. WHAT a good horse.

I am so thrilled for Lauren to being her journey with this guy and I'm excited to guide their training for the foreseeable future. It will be so enjoyable to not only have a training buddy, but also to watch the evolution of this pair. There is so much potential in them both and I can't wait to see where they go.
Posted by Liz Stout at 11:11 AM