Wednesday night, Lauren and I headed north for our first Centered Riding lesson.

Upon arrival following a 90 minute trailer ride on windy roads, Griffin was absolutely DRENCHED head to toe in sweat. He looked VERY sorry for himself and it alarmed me at how truly pathetic his body posture and expression were. In fact, I was ready to call off having the lesson right then and there!

Fortunately, once I got him off and walked him around a bit in the cool evening breeze, he settled. From there on, he was a bit frazzled at the environment he was in, but beyond that, nothing out of the norm. I think he's so used to be trailered to places that he exits the trailer to find oodles of horses that the lack of them at the instructor's barn (she's retired now and only a has a couple that are turned out most of the time) was very alarming. Maybe I'd finally brought him to the horse butcher?!

We took the boys to walk around the ring to see their surroundings before mounting, warmed up, and got right to it.


Instructor C asked me what I wanted to work on. "Anything positional for myself," I replied, "I know I'm always a work in progress. But mostly, I'd really like to work on gaining better control of Griffin's shoulders and hind end. We haven't done much lateral work because it's not the easiest thing for me to work on correctly by myself. Eyes on the ground are something I lack in nearly all of my riding and I know establishing a foundation for correct lateral work will come from eyes on the ground. We've come a long way with other aspects of our riding, but this one is really lacking and Griffin is really to a point where he would benefit a lot from it in so many ways."

Similar work is just what Lauren's horse needs, so a lot of our lesson ended up being the same exercises!

To begin, C gave Lauren some instruction to help get MJ to lower his periscope Arab head and reach more for the bit. As Lauren struck out to work on this, C told me to sit "more on my pockets" and "post from the knees". From there, I was instructed to move onto a 20 meter circle at the trot, focusing on posting to the outside to really encourage Griffin's bend.

C called out several "lovely!" and "that's it!" comments as we did this and I knew why. I could feel a difference in Griffin's movement. It was lovely!

I played around with this concept in both directions, truly feeling what a difference it made before Lauren and I were paired up to work on the next exercise together.

C  had us both work on a 10 meter circle at the walk, alternating our direction every 4-6 circles. We focused on proper bend and getting the inside hind to be more through. C noted that as the horse's barrel swings outward, it should cue us to apply inside leg to really encourage the inside hind to reach and cross under their body. While we were doing this, we had to be certain to keep the outside rein as a solid wall to guide the horse's body. In other words, inside leg to outside rein. She even encouraged us to release the inside rein in a dramatic way from time to time to demonstrate the concept further.


I've heard inside leg to outside rein often. I've even done exercises that center around it. But this exercise truly cemented the feeling of doing it correctly for the first time. Great lightbulb moment for me!


Griffin, protesting the continual work at the walk, my outside rein "wall" and nagging inside leg, broke to trot a lot and curled himself onto the bit seeking escape. C had me make a bit of a rowing circle with my hands forward and up his neck to "reset" him. Odd direction, but by golly it worked every time! She noted that if he wanted so badly to try it "his way" at the trot to give it a go. So we did! And we found a fair bit more success than I imagined we would. Good boy, Grif! 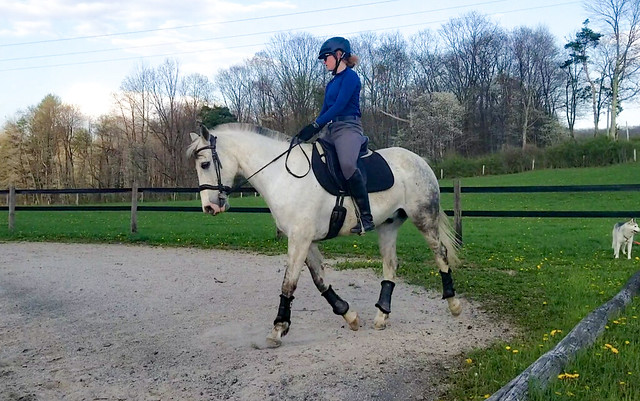 From there the exercised evolved into a figure-8 where we were to "dramatically" change our bend in the middle. It was really fun to practice this and combine both directions after we'd performed the exercise isolated each way. I really felt the change in bend for the first time and was pleased to even receive several positive comments from C throughout.


After this exercise, C focused on helping Lauren for a time. I walked and trotted along the outside of the ring a bit testing some of the concepts we'd gone over before settling myself in a corner to watch Lauren for a time. She's come SO far from last year!


When C turned her attention back to me, she set up three cones equidistant in a line and I worked on leg yielding left and right between them. She wanted me to really focus on keeping him straight as he does all he can to contort himself, throwing his haunches or shoulder out in an attempt to escape the work.


We had a few great passes at the walk, but largely most of the practice was mediocre with a few horrible passes, which were more prevalent in our attempts at the trot (see: Griffin wanting to do it "his way" as noted above lol). C'est la vie. Regardless, it was a great exercise I can absolutely practice at home!


Our penultimate exercise was at the canter because by this point Griffin was really cranky being held to the walk and the trot. He LOVES cantering - always has. His least favorite training days at home are always the ones where we exclusively work on walk-trot and transitions within the trot. I can't tell you how often I have to bring him back to a trot from the canter on those days! He is ever eager to canter and becomes the lightest horse EVER to ANY aid to find an excuse to canter.

C decided to just toss me into the deep end with this one (even though it's something I've wanted to work on for awhile) - flying changes. We practiced this the same as our figure-8s at the walk/trot before, but with 20m circles. The first time we tried it (from left to right) Griffin NAILED it. When we came back around the figure 8 to try again in with the opposite change, Grif just powered forward in counter canter to which C remarked, "He's awfully balanced in counter canter!" And I laughed in reply, "I know, right?! It's a blessing, it's a curse." And she laughed.


I shared with her that I really hadn't fussed with it much because he picks up the correct lead in our dressage tests so far because we're always on a circle for those. The "incorrect lead" pops up more often in our jump work and as long as he is balanced and we have a steady forward rhythm to and away from the jumps, I haven't found reason to fuss. C nodded along and heartily agreed with this logic noting that the lateral work will help him to pick up the correct lead as we move into the future. I nodded in eager agreement.

We tried a few more rounds with moderate to no success. She had me pick up my new inside rein and cue for the change as his new inside hind struck forward, but by that point I think I was overthinking and riding poorly so we never nailed it. Once or twice, he changed in front but not behind. Eventually we took the exercise back to a simple change with a few trot steps. That, of course, granted us much more success.

While it seemed daunting and "above" where I felt our capabilities were in the moment, I'm really glad I was thrown into the proverbial deep end trying flying changes. I was pleasantly surprised we had any success at all and look forward to improving in the future.


The final exercise we did as a bit of a cool-out was focusing on straightness at the walk after I noted to C as an after-thought that Griffin and I have an issue with crooked halts in our tests. In tandem, Lauren and I walked on opposite sides of the arena (K-E-H and F-B-M), turning toward C and down our respective quarterlines focusing on straightness all the while.

The first go, Grif and I were drunken sailors. The second go, we were much better. The final go, was the straightest of the bunch, though the halt was still slightly crooked with shoulders right and haunches left. I asked C if I was sitting lopsided or crooked, had too much rein in one hand vs the other, or perhaps was collapsing through one of my sides. She assured me that I looked just fine and it very well may be a "Griffin problem". Well, damn. I've been blaming myself for that for months lol! She recommended supporting him more through it in the future and seeing where things went from there.


By the time we finished, our hour lesson was more like an hour and a half! Not complaining!! It was a great lesson with a lot of great takeaways and plenty of homework to focus on over the next two weeks when we head back for another lesson. Lauren also had a blast and informed me she's already got her homework "schedule" figured out, lamenting that she wished her school homework was this enjoyable, haha!

It feels damn good to finally get out and get lessons. While I wish I could have done more of this at a younger age, I don't think I was truly prepared or ready and eager to learn everything until now. I absolutely devoured all of the knowledge and enjoyed pushing myself at the lesson. I have a feeling these next two weeks will pass quickly, and I hope we can accomplish some things with our homework so we can show up improved for our next lesson.
Posted by Liz Stout at 11:11 AM