A little backstory: Our regional riding club has decided to provide bimonthly lessons with a local natural horsemanship clinician to club members at a very reduced price during the summer months this year. The club consists largely of recreational trail riders with a sprinkling of individuals who regularly compete in various disciplines. We put on several fundraising events, donate to local equestrian programs, support local youth, put on one endurance ride, and organize a series of single and multi-day trail ride events across the state and surrounding states.

Mike, the trainer, is a fellow club member who has been training horses professionally for years. He's got an incredibly soft hand and natural manner with horses; he reminds me very much of his big-name role models, Bill and Tom Dorrance and Ray Hunt. He isn't gimmicky, just a quiet, understanding advocate and teacher for the animal he's working with in that moment.


Turnout for the first lesson was outstanding! I was really impressed - we had around 12 riders and 8 auditors. I think the club will be gaining some new members purely because of the perk of these lessons!

Mike, had us begin the evening on the ground with our horses tacked, but still in their halters. He introduced himself to those he didn't know, discussed some of his background, and then gave a small demo about how he starts any session with his horses - on the ground with some work in hand before any saddle time. He is a firm believer that if one doesn't practice perfection in groundwork, the work under saddle will be lacking.

He demonstrated how he lunges his horses, looking for bend through their ribcage and an inner eye tuned into him, not the outside environment. He noted that he always looks for any irregularities with the horse's movement that could preclude work for the day. All of this was pretty run-of-the-mill.


Mike had us practice this with our own horses, providing tips and guidance for those who had trouble as needed. He then asked us to see how light of pressure we could use on the horses halter to get them to respond, focusing on one step at a time forward and backward. His directions during this included various safe-handling tips (where and how to position your hand on the halter, how to hold the lead, where to position your body, etc.) to help prevent injury to the handler if the horse were to spook for any reason. 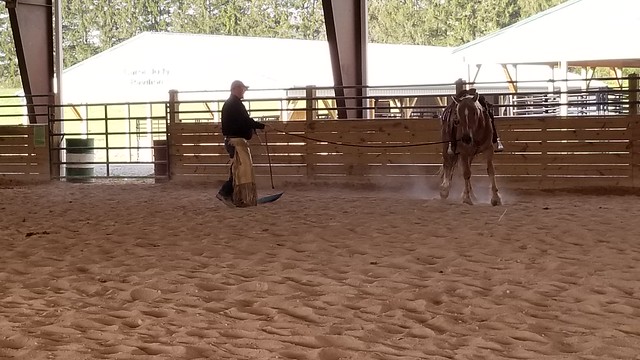 From there, he demonstrated a few more in-hand practices to help warm the horse's hind end up, more or less having them perform rollbacks in-hand at the walk. Throughout this exercise and those preceding it, Mike always recommended that we be firm in not letting the horse walk into our space unless explicitly asked to do so. We should have "control" of their feet at all times and if we ask them to stop a few feet from us, the horse should do so and remain there until asked to move elsewhere. While good training, this also helps guarantee safety for the human if the horse were to react and spook to an outside stimuli. (Mike has been working with a lot of mustangs of late, so safety is always first on his mind.)


For myself, none of these concepts were anything new as I've practiced and worked on this type of groundwork with my horses for years. However, it was a great tune-up for Q and I; mostly though, it was really nice to get her off-property for an activity that was so low-key compared to what we normally do! It was also neat to see other folks who haven't practiced these concepts as often transform their communication with their horses and listen to the impressed remarks of the auditors as they observed.

After about 45 minutes of groundwork concepts, Mike gave a bridling demo for us to consider (his method facilitates keeping control of the horses head at all times, something he's modified through his work with mustangs), and then asked us to mount up. 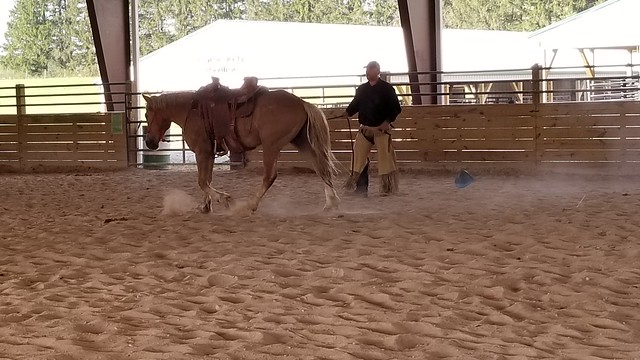 This was the part of the evening I was most eager for. I have a huge amount of respect for Mike and what he does with horses even though my own interests with horses lie in a different realm. Mike's got a great understanding of the animals and does such a great job breaking things down into pieces for them to learn. While we do things in different ways, I know that much of what we work on to meet our end goals is the same, we just explain the concepts differently.


I smiled as Mike began discussing the importance of knowing where the horse's feet are at all times, in and out of the saddle. He noted that truly talented riders can tell you when each foot leaves and touches the ground again. So many folks in non-English disciplines (most local folks around here) scoff at this as English-dressagey-voodoo-nonsense, and I had to suppress my grin as a predominantly western trainer noted its importance.


After teaching this point, he had us feel for the movement of the horse's barrel, inward, outward, inward, outward as they walked. He discussed proper EQ for the seat and legs and had us utilize this to speed the horse up and down at the walk by encouraging them to step more through (move with their motion to encourage the barrel to swing more indicating a larger stride) or take smaller, slower, abbreviated steps (sit down "harder" and use your legs to discourage their barrel from swinging so much indicating slower steps).


From there, it was deja vu for me from my previous night's lesson on Griffin but with slightly different instruction. Mike discussed how to "apply leg" and had us do so in the same manner C had to encourage the horse to be more through with the hind end going around a small circle. I giggled a lot as I realized what Mike was having us do. Lauren and her mom were in the audience (her dad was riding) and I grinned at her as I passed, "Gee, wonder where we've heard this before?!" To which she smiled big in return and said, "I know, right?"


The rest of the evening focused on us getting the horses to move off leg properly, engaging that inside hind more. All of Mike's instructions were different from C's had been, but the end concept was always the same. In fact, by the end of the evening, he noted, "Now, I know I've thrown a lot at you, but what you've all accomplished tonight is getting that hind end to come under the horse and work more thoroughly and correctly."


I wish I could reiterate Mike's directions back to you because it was so interesting to see how they paralleled what I'm more accustom to hearing, but honestly, I can't. As he taught in his way, my brain was busy actively drawing parallels and translating what he said into a direction that I could better implement. So very much of it was identical to what I'd worked on with C the night before!

Q is a much different ride than Grif was though - which I expected. I also wasn't wearing my tall boots and spurs as I had been the previous evening. I definitely need to wear them for the next time I practice this stuff with Q! She currently takes a LOT more leg than Griffin and to have that tiny little spur to encourage her to listen would really go a long way in this teaching process.


The big takeaway for me this night was turning on the haunches. For some reason, this just doesn't click for my brain. I have learned various ways  to implement it and each makes logical sense, but when it comes to putting pen to paper and actually executing the movement, my body and brain do not connect.


Mike's instructions were to turn the horse to the inside (coming off the wall) a for a quarter turn, then halt them and rock them back on their haunches (the beginning ask for a backward step) to unweight the front end, and then open your inside rein more to invite the inside shoulder/foreleg to step over to initiate the first step of a turn on the haunches.


Per the usual for me, this made sense, but I could. not. execute. it. Mike finally asked if anyone was having trouble and I immediately raised my hand. He coached me through each move, and while I was incredibly skeptical it would work even with his focused help, I actually did it! Well, Q did it. I praised her immensely, Mike walked me through it twice more, I praised her, and called it a night.


While the vast majority of what he went over for the first lesson was review for me, it was still a fun experience to attend the lesson. I really like Mike's teaching style and loved making the parallels between his manner of explanation and that which I am more accustomed to; it was so cool to see how he incorporates what I often coin "dressage-based concepts" into his work that is most certainly not dressage as most view it.


I will likely not attend many - if any - of these lessons for the remainder of the summer due to a variety of scheduling reasons (primarily because Thursdays are our locals mountain bike group ride and I hate to miss it, but also due to some other reasons I'll share in coming weeks), but I'm glad I could get to the first one! It was a great experience for Q and I to have together and it was so very cool to see the parallels from my centered riding/dressage-focused instruction the night before. It goes to show that this kind of foundational work is so important no matter your riding goals!
Posted by Liz Stout at 11:11 AM