A slow series of serious incidents with Q on trailers led me to begin further schooling with her this week leading up to our race weekend. I didn't want things to progress to a level where she or I became seriously injured from a trailering incident.

Last Sunday we began our schooling sessions. She's self loaded before onto slant load trailers with a rear tack room, but not onto my little 2-horse straight load.

You can lead her on with zero problems. Her issue is that once she's on she becomes anxious and wants to get right back off. When that anxiety kicks in is variable. It had been after I got her tied and the door closed, but several weeks back it was after she was tied and before I could slip out. She set into a pulling fit that was beyond scary and resulted with her leaping forward almost on top of me.

That was my breaking point.

No more can I be on the trailer loading this horse. It just isn't worth it. She needs to learn to self load and STAY on the little trailer just as she will on the slant load ones.

Aside: Let me note here that Q is in heat and has been in and out the past 3 weeks as the 3 mares are all trading their cycles around. -_- Q in heat is a horse that is very focused on where her friends are AT ALL TIMES, is extra spooky under saddle, and grows very anxious through groundwork. She's never ever been aggressive about anything while in heat, for which I am extremely thankful. She just seems to quit any sort of logical thought process and REACTS more often than not. I recognize this and adjust for it as needed. Do I LIKE that she's like this? No. No. And, no. But on the bigger scale of things its minor. I'm okay dealing with it because she's almost always so awesome in every other aspect of life.

Sunday's session started POORLY. SO poorly. I began with Dom's tapping technique as I stood near the corner of the trailer and tried to direct her on. She made a few good efforts ans was rewarded with an immediate release of pressure (tapping) and kind words and rubs. But as we progressed, she became very anxious about everything. Very anxious.

Q got so worked up over it. Her "way out" of the situation? She bowled over me. NOT OKAY.

I let her know I was there and she had better pay attention and not do that again.

We had a few more good attempts and then she began getting on the trailer and WHIPPING around in a circle and getting off. (The divider slides way over to one wall leaving room for my little athletic monster to do this.)

I worked her on the ground for a bit to try and release some energy and anxiety, but in her frenzied state though she got more anxious and manic and ignored me all the more and then tried to bowl me over again.

The situation quickly snowballed into something awful and I had to have Dee come down to help because my head was NOT in it. I was behaving horribly because my temper had far exceeded logic and Q was feeding off that.

I warned Dee that she would indeed get ON the trailer, but her thing now was spinning and darting off.

Dee calmly and patiently walked Q around the yard periodically stopping and backing. Everything was quiet and calm. It was what needed to happen that I just couldn't do at that moment. She started her walking up onto the trailer with one foot at a time as she hid behind the divider in a manner that if Q spun around Dee wouldn't be bumped or injured. 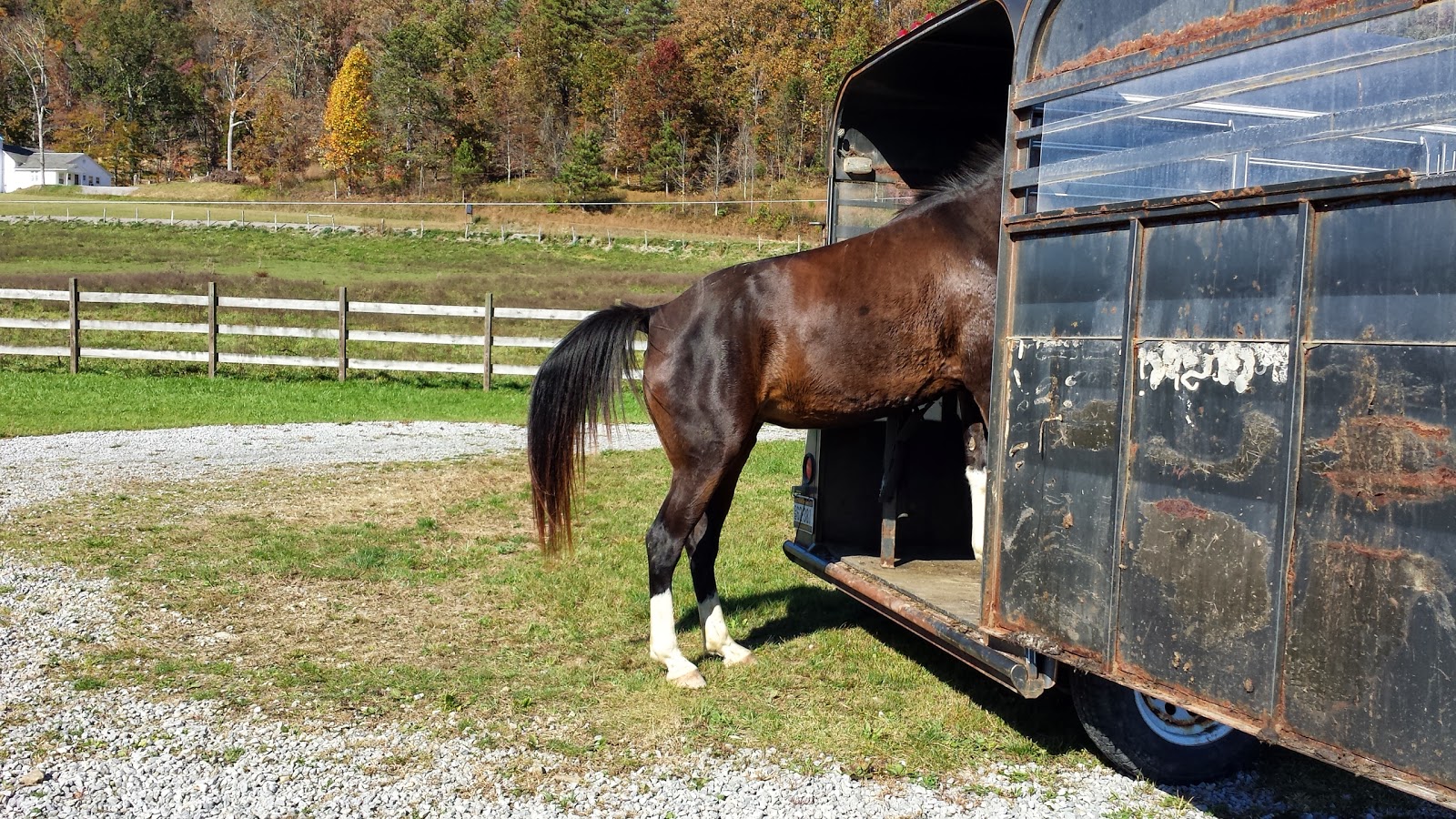 Within 5 minutes Dee had her loaded fully and then she did her spinning thing and tore across the barnyard.

With confirmation that Dee was unhurt, she then exclaimed, "So that's what you meant. What a bad girl."

And with that we resolved that I would back the trailer into the barn and butt it up against the round pen door so that we could make her work and have her only resting place be the trailer where I'd also put a bucket of grain interlaced with peppermint treats (her favorite).

She started by walking over and snorting and blowing, then decided it was too scary. Back to work. Attempt two: a foot on, too scary, back to work. Three: she got on, but shortly. Four: She got on and stood. Praise, praise, praise in the way of kind words and me standing as far away as I could put myself so she had zero inclination to worry about having to go anywhere.


After a few minutes I backed her off and repeated the exercise. She went right back on. We laughed.

We repeated the exercise more. She'd turn around and peer out, but she wouldn't get off the trailer. I couldn't ask for much more.

We ended on a good note when she didn't turn around and called it good until I could return Wednesday for further sessions.

Wednesday didn't go so well, however.

It was the night of our first snow.

I'd been watching the horses that are in the field around my apartment - prior to heading out to see Q - running, jumping, bucking, and performing all sorts of acrobatics in excitement over the cold weather. I figured I had that in store for me at my barn, too.

Yep. That was true.

I brought her into the round pen and she bounced around at a trot for a time. Then she scurried onto the trailer after a time.

She whirled right around to face backward though. No bueno.

I walked calmly over and had her step off to go back to work. She walked off like a lady.

Work work work. Back on she decided to go. I backed off and praised her from a distance.

She stayed facing forward for a time this time. She turned finally and I walked over and got her off again. Turning = more work.

Wash. Rinse. Repeat. She stayed forward long enough for me to get on and back her off like a lady. Good girl.

The exercise progressed as one would expect, so I moved to the next step of adding her lead rope and actually standing beside her to "load" her as I would if she self loaded. No issue getting on, but she did pivot around rather quickly. I got her off walked her in a circle and had her load back up. Much better.

Things progressed well with that and then I moved to closing the door.

She'd be facing forward, I'd close the door, and then she'd turn and look out the back. I talked to her and she just stood there. I waited a few seconds and then would open it. She didn't make a move to get off at all. So that was good that she didn't want to go charging off.

And then we hit the point where things just sloped off downhill. My communication must have erred at some point and she basically flipped me the bird after that.

Dee had showed up. And another boarder. And my vet.

We talked a bit. My vet has a horse who is super athletic like Q who she also refuses to be on the trailer with because he acts similarly. (Note the HE. Q's a mare but she's not that crazy, haha.) She said on trailers like mine he'll ride backwards and she doesn't care because it just works well for him (oh, hey there Funder, didn't you mention Miss D doing this, too?) So that was encouraging to hear.

I continued to work with Q trying to find a good point to end on.

She'd gotten to the point where she'd get on and when she'd stay facing forward she would start to back off as I was anywhere near the back of the trailer. It was a little frustrating, but I decided I'd put a positive spin on it by applying pressure to her tail and pulling it to initiate what I hope to initially teach in order to have her get off trailers in the future.

So that was positive. And in hindsight this is where I really should have stopped.

But Dee wanted to see if we could get Q to self load with lead rope and stay facing forward with the trailer pulled away from the round pen. Seemed like a logical next step so I proceeded. (beats head off table)

And Q refused to even get more than two feet on. She just. wouldn't. do. it. SO FRUSTRATING. And she was getting manic again. And getting her manic tunnel vision. And then I got my arm stuck between her spinning around ass and the side of the trailer and it almost broke.

I sat down from the pain. Breathed. Assessed CMS (circulation, movement, sensation) in my fingers. Could flex the arm some. But then I couldn't grasp or hold things as simple as the lunge whip in my left hand. F*ck.

I pushed through it though and we got Q to load on - albeit for a brief second before she backed herself off - and called that a positive note.

I turned her out and gave into the pain and went home to nurse my arm and whine to close friends (thank you those whom coddled me, I needed it then).

I had a scary hour or two with the arm, but my dad (retired ER doc) called and had me perform some range of motion exercises to determine it most likely wasn't broken. I was already in a sling with ice and had taken anti-inflammatories, so there wasn't much more I could do but wait at that point. And fortunately - super, super fortunately - it was much better for 75% of movement by morning.

And thus, the race should still happen for me this weekend! The trailer saga will continue, as well.
Posted by Liz Stout at 10:30 AM