Yesterday Chris and I went into DC to see the cherry blossoms.  They're not quite at peak yet but they were pretty awesome, I thought.  It was the day before the festival began - so crowds weren't too bad.  I really enjoyed seeing what our nation makes such a huge deal over.  I've been wanting to go for three years now.  It was really awesome to finally visit - even if my feet are super sore from all the walking in my moccasins (because I chose to look cute vs. being functional, oops). 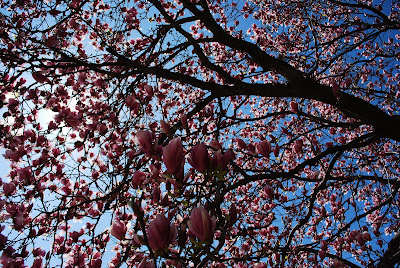 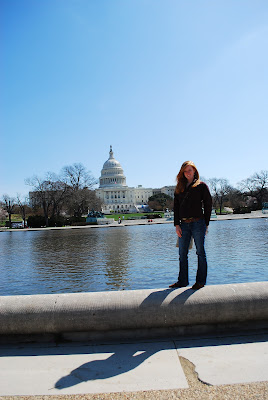 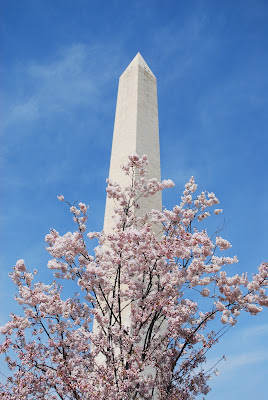 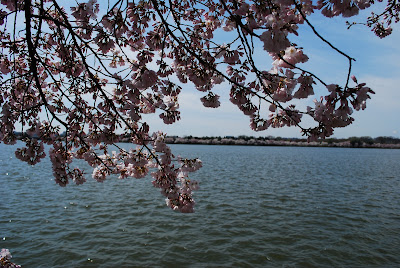 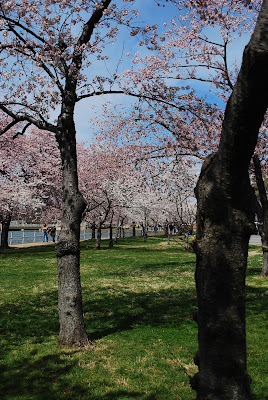 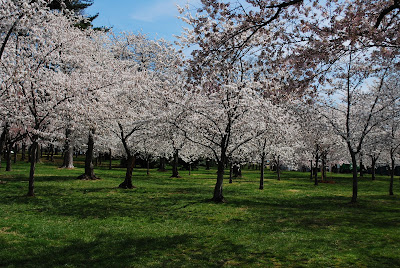 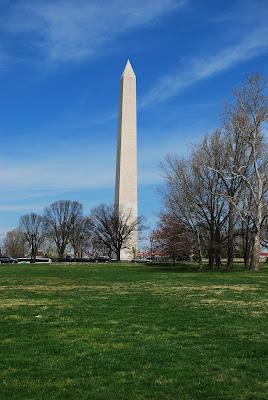 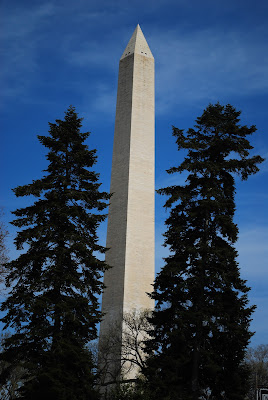 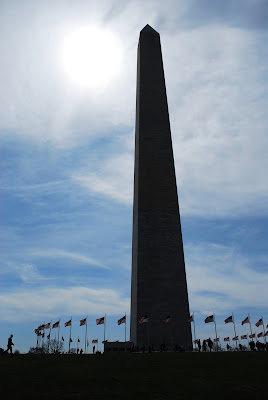 I'm a lot more comfortable exploring the country-side than the metropolitan areas.  They are cool, but they make  me uneasy because I am so unfamiliar with them.  I've never been to NYC - I really want to go but just haven't yet.  I need to find a super savvy city person to travel with.  Its one thing to meet my friend that lives - and acts - there, but the whole getting there makes me nervous.  I'm just really ignorant about public transportation and large super-crowed areas.  I've been to forty of the fifty states, but mostly to the rural areas.  I can get through and around airports really well, too.  Big cities make me nervous.  The metro to access DC is something I feel a little more comfortable with thanks to WVU.  WVU has a PRT (Personal Rapid Transit) system to access our two campuses.  Its basically these mini cars that we cram ourselves into to get to one of five stops.  The metro is basically just a giant PRT car for me; thanks to WVU for that.  I really like DC though - its probably the biggest city I've ever visited.  Its so clean, the downtown area is so open and un-cramped - it makes it really easy to feel comfortable in a busy, busy area.

Last night once we'd arrived home, had dinner, etc. I got an email from my mom.  My 87 year old grandmother fell while doing laundry and broke her hip.  She went into surgery this morning.  Mom said they replaced the ball, but the socket is as it originally was.  Nana is slated to stay in the hospital for three days before she is allowed to leave and then begin physical therapy etc.  My mom's parents have been very blessed with amazing health - this is the first major issue my Nana has had.  My Papa had a minor stroke two or three years ago - but it didn't impede him at all - he was really lucky.  Mom says Nana is being a very good patient though because she wants to get better very soon.  Nana advised me to never break my hip because its worse than giving birth - I told her I'd try my best not to do that at my ripe age of 22 (break my hip that is...granted, I'm not really ready for a kid either.....).

I was also able to be super-productive last night.  I looked at a calendar and realized, "Oooh shit, I have four weeks and two huge papers to write - one of which is my senior/honors thesis!"  So I got to work.  Since then I have read three papers to include in my review paper for my animal behavior course (for which I must have a minimum of 15 papers), emailed critical people about deadlines, started my online GIS 3D Analyst training (coolest thing EVER rendering 2D maps to 3D maps, I freaking love technology), and I organized and set definite goals for myself for the next two weeks.  Oi vey! 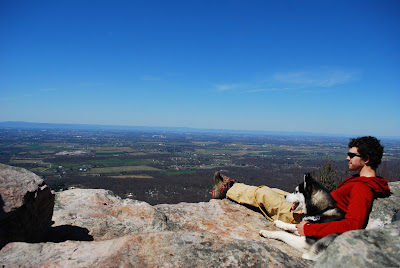 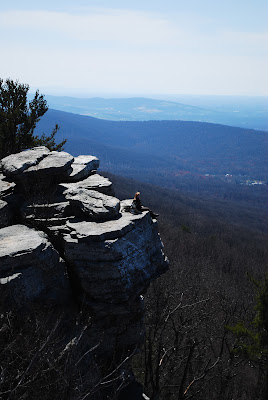 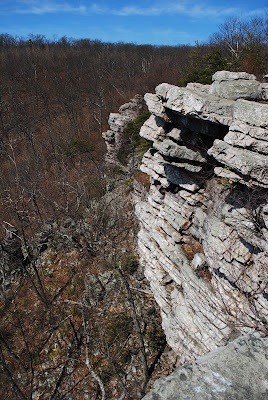 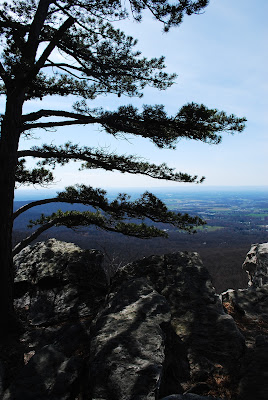 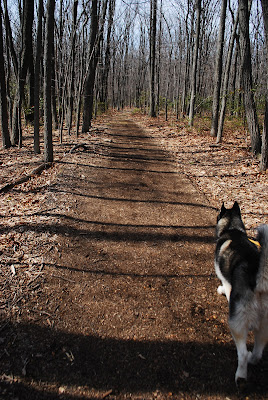 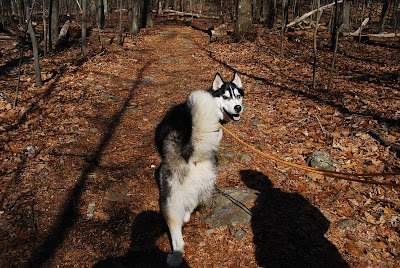 Today Chris took me up to Black Rocks and Annapolis Rock.  We had planned on climbing, but colder-than-expected temperatures changed our minds.  It was fun to hike on the AT (again) and see the big rock/cliff areas.  I also discovered my biggest pet peeve: BEING A THUNDER-FOOT.  I thought this was just something that bothered me when people did it in houses/apartments, but when hiking today I realized it bothers me outside even.  What is a "thunder-foot" you may ask?  Its someone who stomps their feet when they walk more than is needed.  Typically it happens inside and makes the person sound like they weigh 3x their actual weight because they stomp, stomp, stomp around the house trying to put holes in the floor - I have since discovered this is also possible OUTSIDE.  Gaaaahhhhhh.  These two men were hiking behind me as we descended back to the parking lot today.  The trail at this point was very loamy soil, with minimal sticks and rocks yet somehow these guys managed *thud thud thud thud crunch click click thud thud crunch thud* behind me.  The most I heard between Chris and I was the *swish swish swish* of baggy pant legs swiping against one another.  WAY TO RUIN NATURE, ANNOYING MEN!  ALSO, an absurdly obese family was out day hiking as well - I mean, GREAT for them to get out and DO something to be active, but honestly did they have to litter the trail behind them with candy, water bottle, and Oberto's jerky wrappers?  GOODNESS.  Chris and I picked up all their mess clear back to the parking area.

Overall - a GREAT couple days.  It was concluded this evening with the greatest lump crab cakes, orzo, asparagus, and wine.  Yum, yum, yum.  Hope your weekend/break/whatever was just as enjoyable. 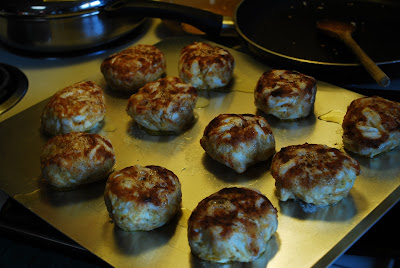 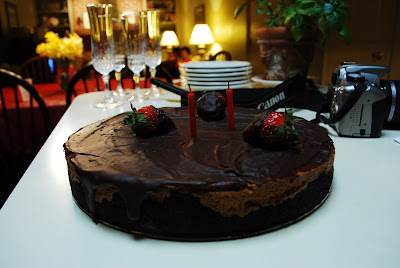