Tuesday night Kenai was still at the vet's and Atticus was at my parent's house because he's trends toward being a shitlord (moreso) when he's alone without an outlet. This left me free to head immediately to the barn after work.

It had rained much of the morning (about 1½ - 2" of rain from reports; we've had a ridiculously wet summer) and then a short, heavy burst happened again the hour before I was planning to go ride. Prior to all of this precipitation, I'd entertained the idea of playing around with the new jumps. Not so much after though.

I didn't really have a plan at all when I arrived.

I decided on the saddle just in case I decided to extend my ride further. Good thing, too, because I ended up riding 6.33 miles on road/rail trail. Fashion be damned.

This ride lacked a plan or purpose in the beginning other than, Well, I have time tonight I may as well take advantage of that fact and ride.

And so we rode. I didn't want to go for too long in case I had time Wednesday (predicted high of 70 degrees, *swoon*) to ride, also. So I settled for a 6 mile goal. Speed? Hmm, lets try to keep a trot for as much of the ride as possible (where not walking through a few tricky sections) and see what our speed comes to. Its time I really start testing and rating and fine-tuning Q's trot.

And that's exactly what we did. 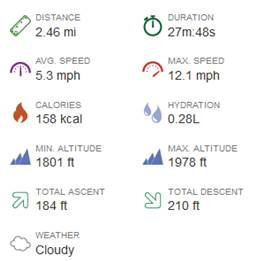 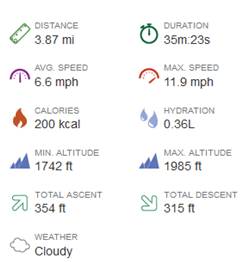 My Endomondo track got canceled and split into two after a phone call (while riding tehe - but really, I had THREE calls yesterday, it was silly) to my brother. The total ride ended up being 6.33 miles with a 5.94 mph average speed. Looking at the charts in more detail on Endomondo afterward, it appears Q's trot is 8-10mph.

I can say with certainty that when the decision is left to her to choose pace, she sets it around 8 mph. When I focus on her and encourage for more speed, while discouraging speed that would lead to a canter, she picks up a nice 10 mph trot.

This ride definitely contains no rough terrain, so things will eventually vary. But for a workout where I really want to rate the trot and get some good distance in, this is the perfect ride.

The rail trail and back road are a little too open for me to be comfortable going very fast on because Q finds silly reasons to spook (too much to look at and consider). Trotting is perfect though. She can dance and prance around "scary monsters" without really breaking gait or tossing me around very much at all. At the canter she always breaks gait in her antics, and I end up getting a little more of a chiro adjustment than I desired.