(I did a poor job explaining some things here and rectified it with this post.)

I asked Saiph last week what other "gadgets" existed that I could make to help with Griffin and especially Q to help them learn to move better. She gave me a list of things, but the chambon really caught my eye.

I'd noticed this article on Sustainable Dressage about how the Fauxssoa I've been using was basically causing the horse to use himself in the manner we wished because his own hock action was cracking him in the mouth and forcing him to travel in such a manner as to try to avoid it. I didn't like that idea much.

The same page on Sustainable Dressage also had good points about the chambon. It relieves the pressure when the horse stretches forward, down, and out.

Griffin is so soft to cues because I've always "offered a good deal" before giving him a bad deal as far as my requests to do things. He's very smart, as most young horses with a blank slate can be, and has figured out over time that the good deal is the way to go. The observation that his hock action was putting undue pressure on his mouth didn't thrill me at all. I want him to move well without some painful stimuli.

I have to also note, that while warming Griffin up at liberty with only the butt bumper on, he started to collect himself without any sort of gadget help! It was only for a few seconds at a time, but I was thrilled to see him choose to do this.

Once the chambon was attached at the loosest setting, I set Griffin around the ring once more. He figured out in short order how to relieve the pressure from his poll/the bit and went into a nice little frame. Good horse!

I tightened the gadget up a bit after several minutes just to see what kind of difference it would make in Griffin's efforts. Would he find a nice way of going quicker? Would it be more dramatic? Or would he just stay the same? 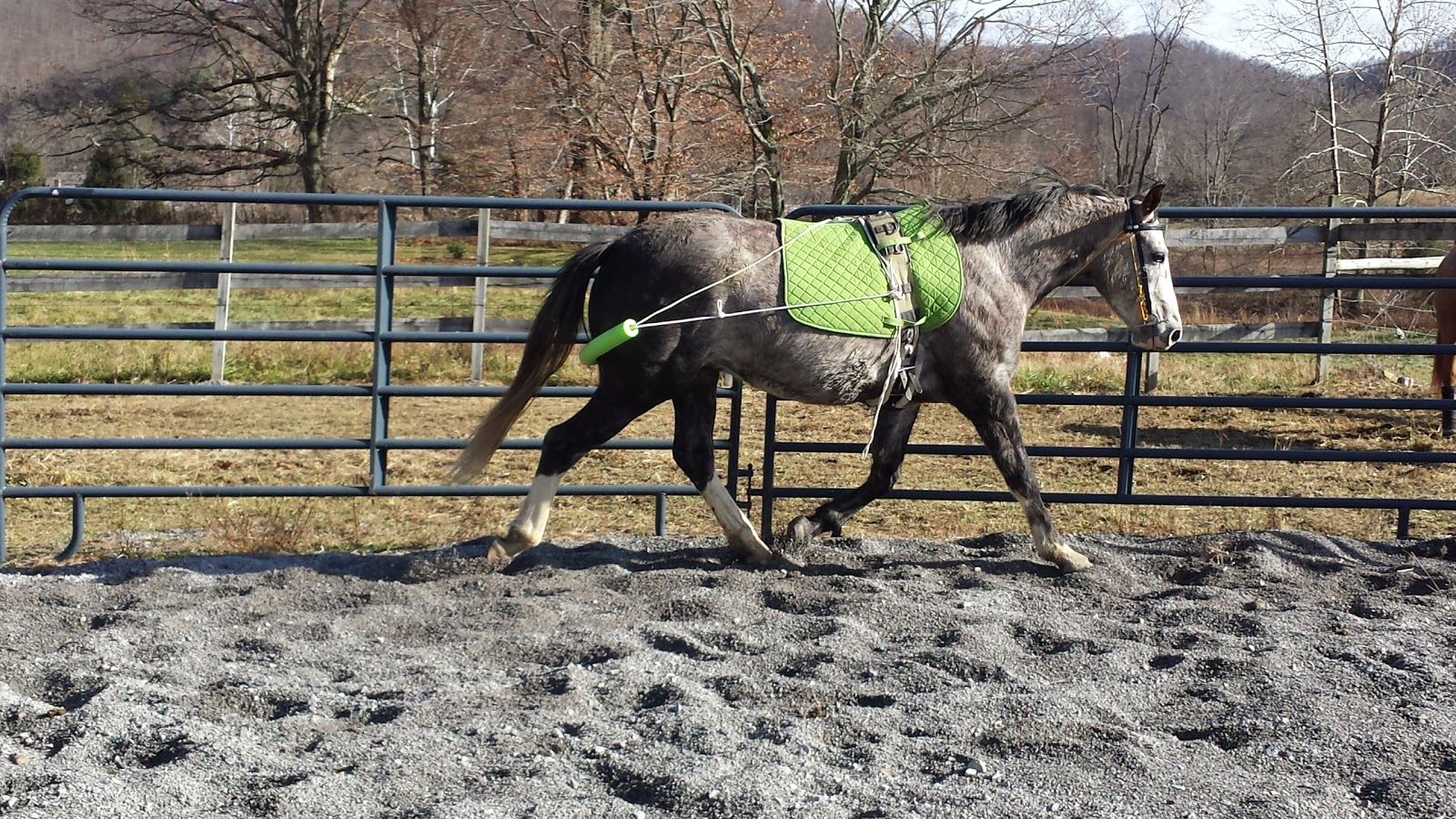 The answers: a little quicker and mostly the same.

I like gadgets like the chambon and butt bumper for Griffin. They're great reminders for helping him to bring his back and body into the equation better. The more he works and is reminded, the more he seems to want to choose the "right" way on his own.

Q and the chambon though? The brief time I tried this with her she braced.braced.braced against it. From loose to tight. I made it as tight as I was comfortable doing to try to make her uncomfortable enough to QUIT BRACING, to no avail.

I think I'm going to have to come up with another solution for her. I think she was treated a bit roughly in the beginning of her life. Cowboy training can be good - and has benefited her much - but the force used for some things (and over-use of the training flags for ground stuff) just really killed the trust my girl has for humans. It takes a lot to gain her full trust, and it can be shattered quickly with harsh actions.

So the verdict? Yay for getting out of Griffin's mouth more with the chambon. Ghetto homemade devices for the win! And Q? Well, we've got all winter to discover something to help her; share your ideas if you have any!
Posted by Liz Stout at 9:00 AM