A week or so ago I headed out on a training ride with our only other local rider, Jen + her daughter. They were going to be competing in a 50 the following weekend. The ride would be the first 50 for both horses. Jen was planning to take it nice and slow all day so that both had a great experience and would make it through without major issue (hopefully).

Jen brought both those boys + her seasoned horse Eagle out to the rail trail to get in some easy miles. She was planning to put me on Eagle (aaahh, I wish!), but I end up with some deep bruising if I ride in her Boz saddles for > 5 miles; I requested to use my Ansur. Eagle canNOT stand new tack at ALL, so me riding him was out of the question. (Sadface. This horse just finished a pretty kickass 100 last month in IL and has insane potential all around.)

So instead, I got to ride a Monarch grandson, Prince. Jen was on Eagle. Her daughter rode Vinny.

Jen's daughter had picked Prince out for herself from a list of candidates Jen chose for her last year. Jen has had wonderful experiences with Monarch's sons/daughters/grandbabies in the past and knew Prince would be great for her daughter. (Apparently Monarch babies are all very sweet and personable.)

Prince started out great. But with more and more conditioning he's really emerged as quite the leader. His racing blood has started to dominate of late. Jen knew this may happen, and fortunately, Vinny is turning into a great mount for her daughter instead.

Prince is barely 14hh. Small for Jen - who is accustomed to riding a 15+hh Eagle - but right up my alley since my guys are both right around 14.1hh. He's a tiny thing, but strong and determined.


Unlike my two though, he doesn't have a very big stride. He's rather pogo-sticky actually. And very often on the forehand and braces himself on the bit in such a way that he expects his rider to hold his front end up.

Riding him took a lot of getting used to. Posting his pogo stick trot was...interesting. I couldn't get myself to post fast enough. I tried again and again in the beginning, but I could only stay with him for a couple strides. It was rather ridiculous. I'm not even sure what I ended up doing, but I found a rhythm that worked for both of us and went with it. 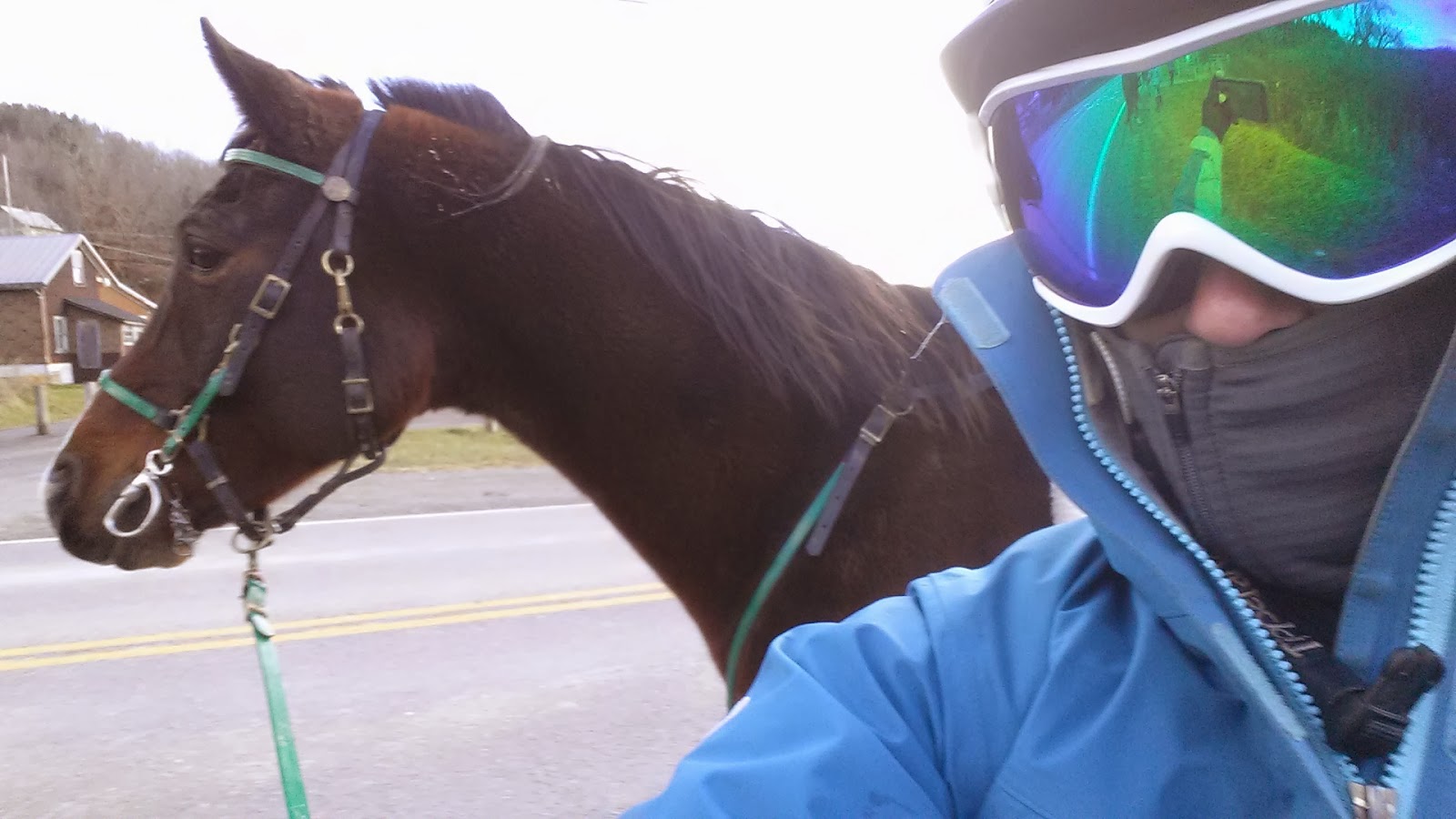 He was forward, which startled me a bit in the beginning because I don't like to take off on a horse I don't know well. Q's spooks of late have me SO on edge about speed with a horse. Not to mention the fact that you ask for brakes and he THROWS HIS HEAD IN THE AIR Not violently but damn. VERTICAL. Like RIGHT in my face.

Prince's mind is better than Q's though. He was spooky, but he doesn't spook. He'd give the stink eye, slow his gait, and maybe give things a little bit wider a berth, but nothing drastic at all. THAT was a breath of fresh air for me! I miss when Q's spooks were so much more minor...

His short stridedness killed me though. It was so difficult to get used to! And then his tendency to fall onto the forehand at the canter in a way unlike anything I've experienced in memory... Oh gawd. Jen said she'd noticed the SAME thing about him though; she thinks it may be attributed to his longer-than-necessary-for-his-build neck. He tips forward, expects you to hold him up as he leans heavy on the bit, and just gives this overall impression he's about to do a front somersault as he's plowing along. 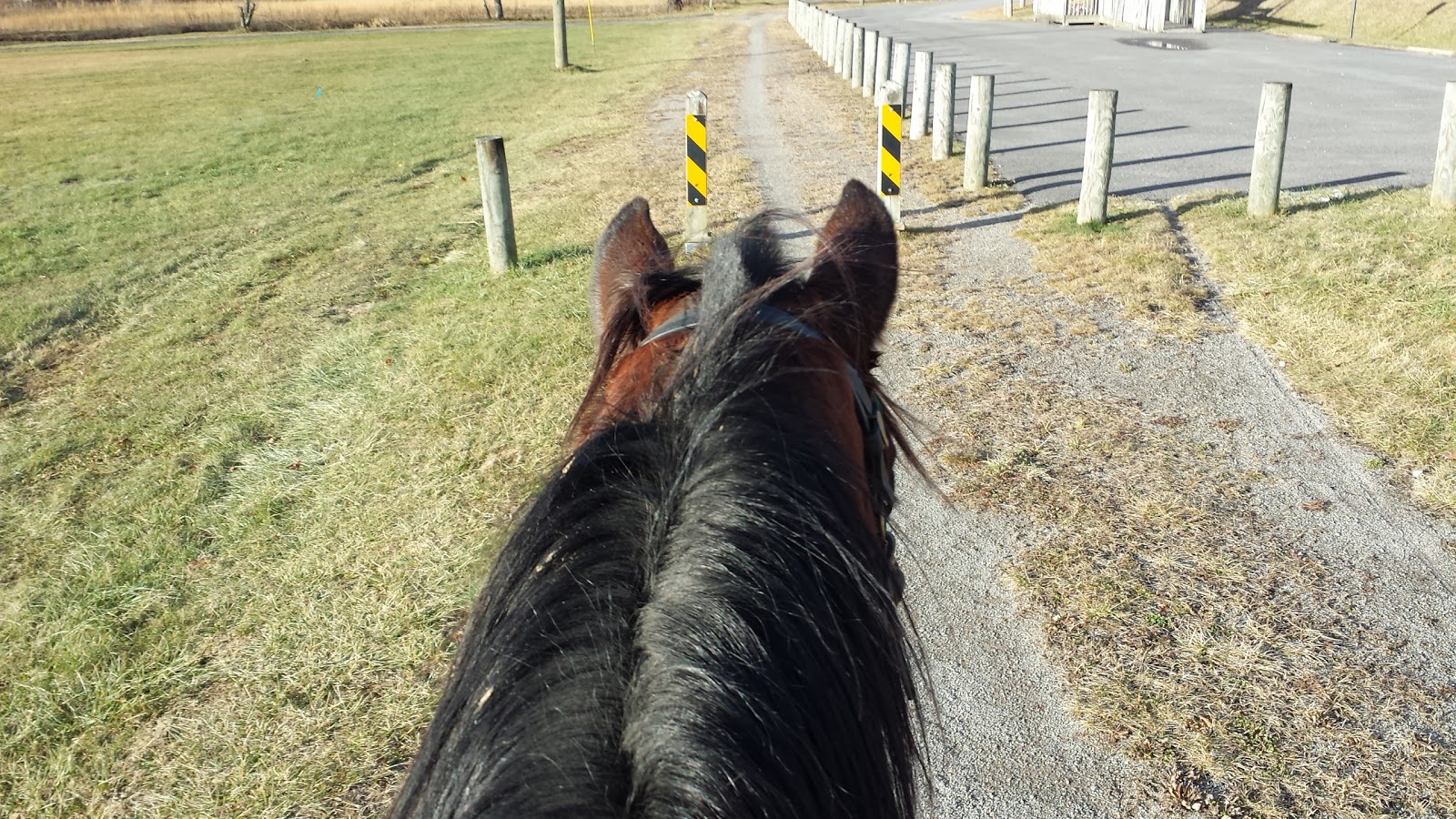 It was unnerving at first. After 7 or 8 miles though, I learned that I could give a twitch of my fingers to twitch the bit and he would correct himself a bit. Repeated twitching as he tried to go back to his habit would put him back into a normal way of going. I agree with Jen that he'll figure things out as far as his movement with time and more miles.

We did around 15 miles on the flat at an 8.14 mph pace. Not too shabby. Right where Jen wanted them to be.

It was a fun ride. My abs were killing me the following two days from riding that little pogo-stick though! It was definitely a good hurt, but made me appreciate how nicely both of my horses move. Prince is a good little horse, though. I know he'll have nothing but good in his life with Jen and her daughter, too. I'm excited to see where they take him!
Posted by Liz Stout at 9:00 AM