Dogs at the Office

While not common, there are some work places that allow man's best friend to accompany his human through the work day. I think many dog lovers covet such jobs and lust after the opportunity to bring Fido to work - even if such jobs are rare and unlikely to fall into their laps during their career. I've been - and Kenai has been - very fortunate to have held numerous jobs where Kenai can accompany me to work.

The first summer I had Kenai, I obtained a seasonal position at the local Petco as a dog bather. Kenai was able to come to work with me every day. When you've got a 10 week old pup you're trying to potty train, nothing could be better! The fortune of being able to bring Kenai to work with me meant that he was potty trained in no time. Additionally, he gained valuable social experiences with humans and dogs alike. The social experiences Kenai gained coupled with the manners in and out of cars and buildings was absolutely priceless and paramount to Kenai becoming the dog he is today.

My seasonal position the past four winters at the ski resort(s) is also a job where Kenai is able to accompany me to work. At one of the mountains I work at, Kenai has become the mascot for the ski patrol. Prior to his injuries and rehabs, Kenai would accompany me to the top of the mountain and ski a few runs with me every day. (In which he would run alongside as I skied, lest you think he's a doggie genius with his own skis.) Riding the lift with your pup really tests the trust in the relationship! Kenai tackled it well though. He learned a lot about focusing on me and ignoring crowds during our time on the mountain; this is a really valuable skill that many dogs seem to lack!

Finally, in addition to the above seasonal jobs, Kenai also accompanies me to my career-job as a biologist. I'm often at my desk making a difference for animals and their habitats from the indoors more than I am in the field. Sitting at a desk day in and day out isn't always the most exciting, as one could imagine, but the days I bring Kenai along certainly make it better! I'm so very fortunate to work in a small office with some really outstanding supervisors and superiors who are also dog lovers. We have a baby gate that rotates between several of our staff on the days they've brought their dog to the office (as we don't seem to have them here on the same days).

Kenai is great in the office setting! The time spent accompanying me to previous jobs and the lessons and skills he learned from those have definitely helped turn him into a solid citizen in the office. He's so well behaved and receives compliments very often on his behavior. Often, my coworkers don't even know that he is here for a few hours because he is so quiet and unobtrusive. Most of the time however, his presence is noted and he is often greeted before I am. ;-) 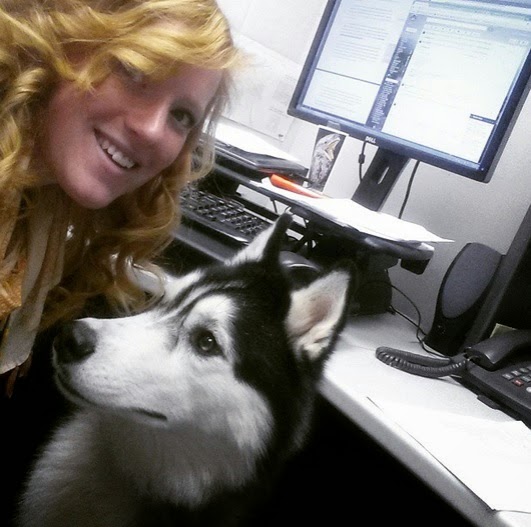 Traits that make Kenai (or any dog!) perfect office companions are:
I am so very fortunate to have the option to bring my dog to work. It definitely adds some spice to situations that would otherwise be quite dull and allows me to spend time with my favorite guy.
Posted by Liz Stout at 10:00 AM

Email ThisBlogThis!Share to TwitterShare to FacebookShare to Pinterest
Labels: dogs at the office, Kenai