I'm not dead yet. Still here. Still kickin'. I'm just busy working the three jobs and traveling for the main job of late.

I'm only getting to the barn once or twice a week right now due to chaos reigning most of life. Come April, I'll have a bit more time in my schedule to ride. The good news is that the snow is gone and the world is my oyster again so far as riding all the places goes. 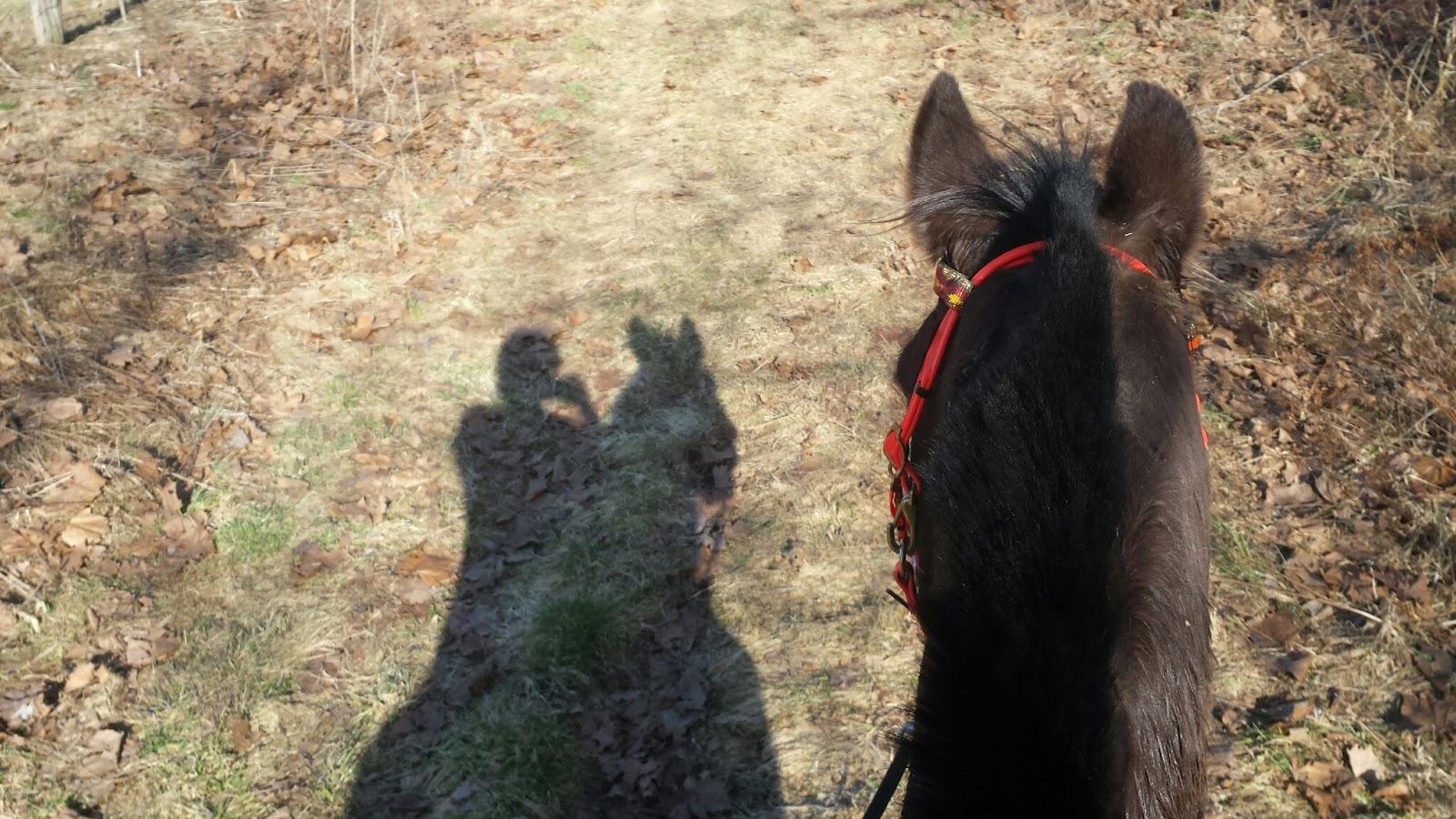 Q and I have been doing once weekly training rides. She's doing wonderfully both physically and mentally - but mostly mentally. Last year was a huge setback for the mare and I with our mental game, as I've stated on here before.

We've been moving slowly this year to build back to where we should be. Deciding to do the LD in April has been a huge help as I don't feel the need to push her to "be ready" for a 50. We're relaxing and our training rides are going very well as a result! I've got a confident horse who has only spooked, at most, one time per ride. This. Is. Huge.

I've been riding her a lot in the back field recently: huge sweeping loops around the perimeter within sight of home, about 2.5 laps to make a mile. While still a little rushy in a few spots of the field, she settles well into her job after a lap or two. She knows her job is to move forward and stay on the perimeter, and knowing her job lends her confidence, I think. After the first lap or two, she's settled enough to move out on a loose rein. We've had some wonderful canter work back there as a result!

I'll add in trails and climbing in the coming weeks, admittedly though, I'm not greatly concerned with having to build on more fitness to complete the April ride! The primary objective is keeping the mare happy and building confidence right now.

A noteworthy confidence marker - the mare let me shave all four of her legs last night with no issue at all. Stood stoic and calm for the whole thing. She seems to have some very minor fungus already going on, but it mustn't be very painful as she did not react to me messing with her legs. I suppose it may be some really socked in mud from the field, but we'll just have to wait to see. I spritzed her legs with some of the product I'd been using last summer just in case. Griffin has been enjoying a spring of lazy. I've not ridden him at all. My time is so limited and I've got nothing huge planned for the grey horse for awhile yet, so sitting in the field and building back some of the weight he lost during winter seems like a perfect plan.

Griffin has so far accompanied me on one run. He was a great partner, though demanding! I'm trying to get more into running this year for fitness and figured taking Griffin along would be good. I think he loved it. I had a very alert partner for the short 2 mile jaunt. I'm looking forward to more running in the spring months with my grey guy while Kenai is out of commission.

Griffin and Q both have been helping with once weekly lessons for my 3 year old (4 this week) lesson student. She's coming leaps and bounds for being such a tiny thing. Griffin listens well to me and is perfect for the "red light, green light" games we play to build confidence in my student. Q however, is the perfect horse for this job. She is SO ATTENTIVE to this little girl. I've never seen her pay so much mind to a human before.

Last night was time to finally teach my student how to use the reins; her confidence and balance are finally to a good point. She had done most of the lesson on Griffin to this point and began learning how to control him on her own. Griffin however, is a baby himself still. He does very well with an accomplished rider, but a small 30 lb. child? He's confused by her requests. She did well with him, and he with her, but I grabbed Q over to see how things would go with her. 10x better. In just a halter with reins and a bareback pad, Q moved all around the outdoor round pen for my student, at least one ear always attune to what the small tot was doing on her back. Griffin was happy to relinquish this job to his sister and chose to bide his time hiding his head in my arms or nuzzling me, clearly I am his human and others just won't suffice. 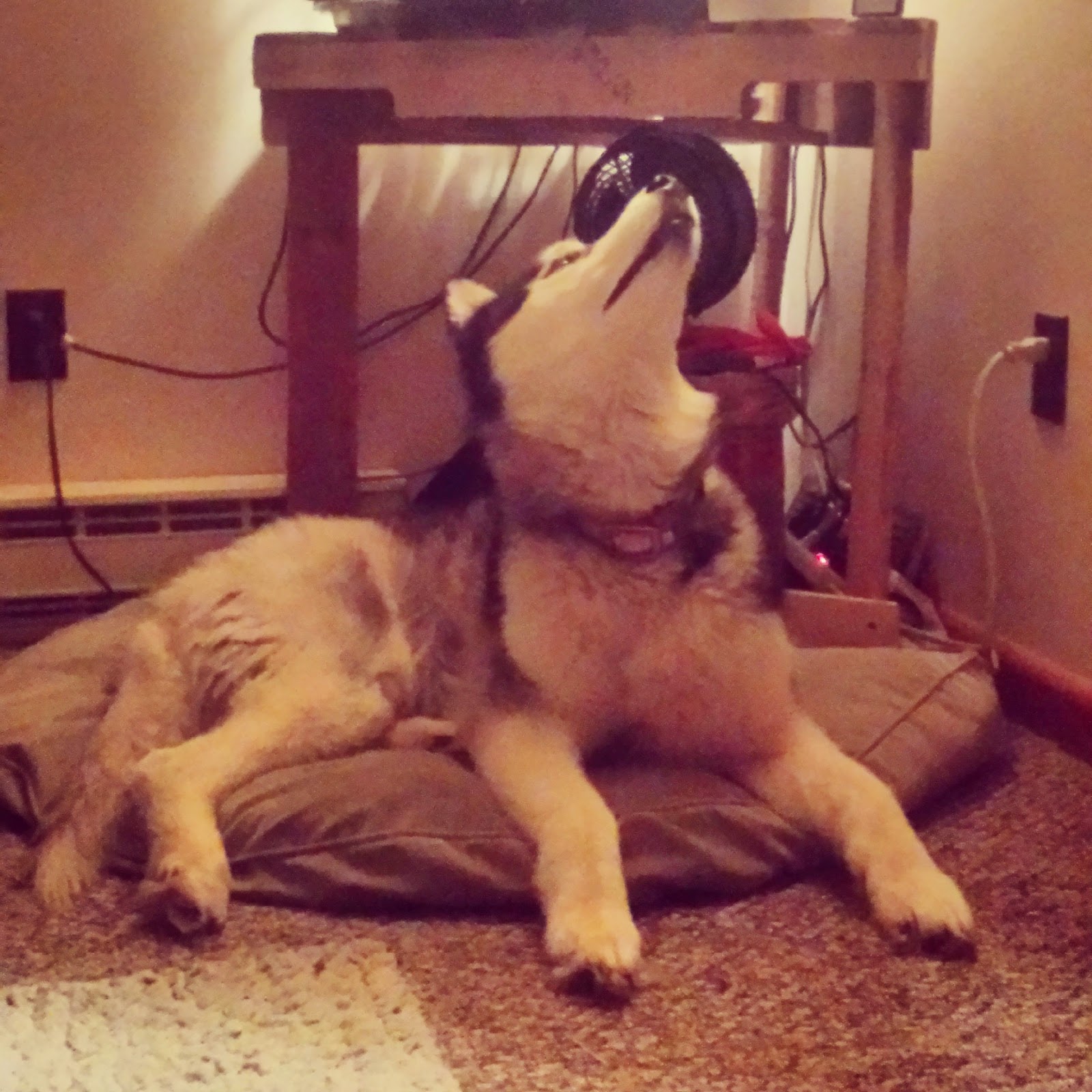 Kenai is still on house arrest while I try to give his fabella time to heal on its own. He's finally seemed to settle into the routine of only going out 3x a day to potty (unless he asks for an additional) and spending the rest of his time in my small living room. He occasionally gets on a bender and wants to play hard and rough, but so far I've redirected these times by giving him a rawhide to busy himself with for a time. I hope to begin taking him on short walks and doing some strengthening exercises in April. Fingers crossed things go well!
Posted by Liz Stout at 10:00 AM