I had the unique opportunity this past Sunday to participate in my first hash house harrier ski hash. I'd participated in a hash in college on foot, but had always wanted to do a ski hash.

What is this "hash" thing? Well, considering a large majority of my readership is equestrian-based, I'll describe it in terms you'll be able to understand. Fox hunting. It's basically fox hunting. Minus the horses though. Although for me, the day had many correlations to endurance riding.

Essentially, a group of folks get together. Hares (fast skiers) are pre-decided. These folks set out through the countryside and mark the trail as they go so the hounds (the rest of us) can follow 15 minutes or so later and attempt to "catch" them. Builders chalk was used to mark their path.

It sounds straight-forward, except when you consider the fact that the hares will set false trail just to screw with the hounds. A sprinkling of color on the snow indicates you're on trail. An X means there is a cross roads - one trail is false and one is true. And three horizontal lines atop one another means Stop.

Added enjoyment to this whole thing? Alcohol. Periodically along the trail the hares will leave beer, liquor, or moonshine. Because what's exercise without alcohol?

The whole sha-bang ends with a potluck back at the host's house. Because food, y'all.

Sunday afternoon I headed over to the host's house along with 40+ other people. 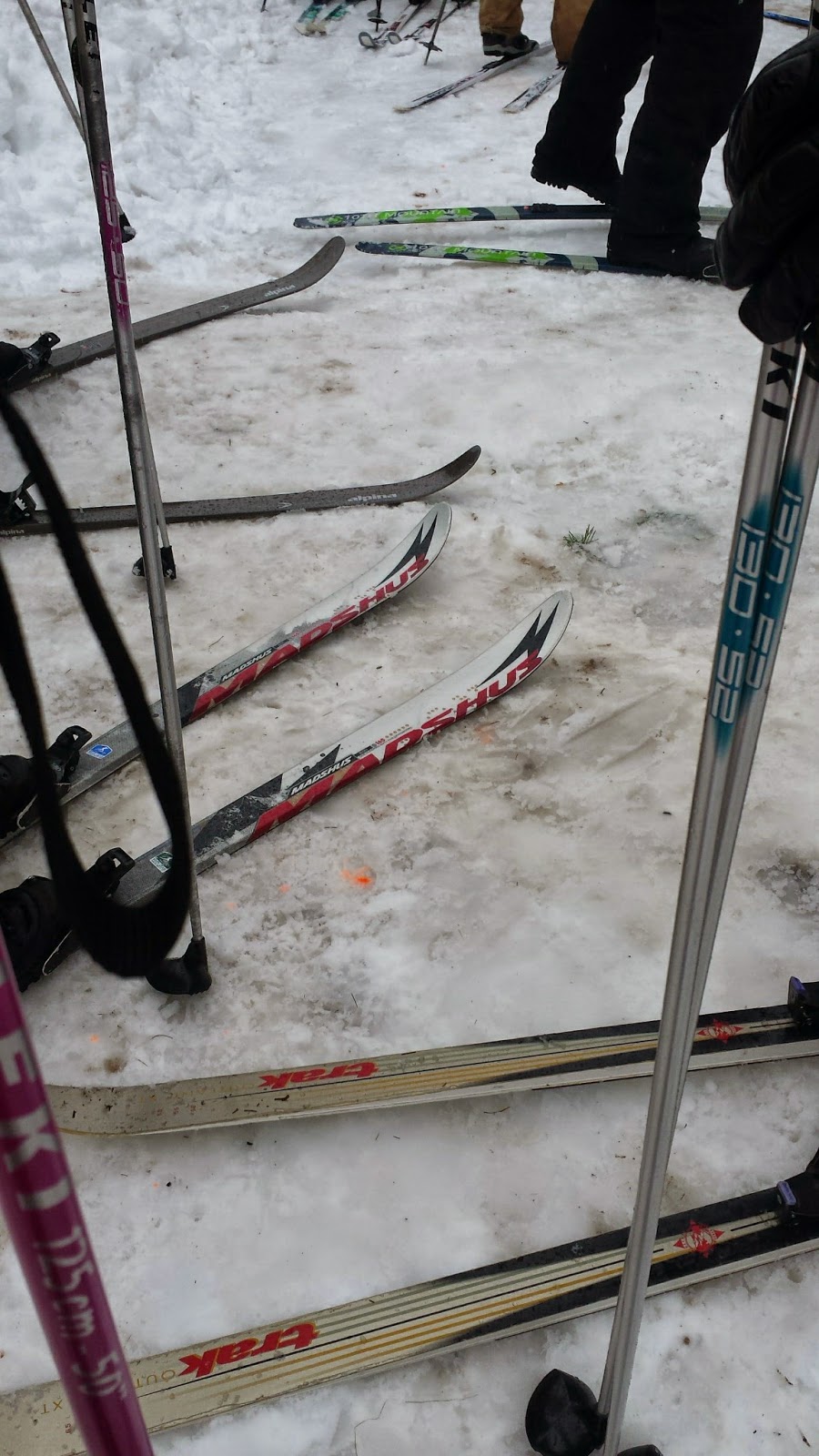 The day had started with snow, but by the time we arrived at the host's, it was turning to rain - where it would remain for the rest of the day. But that's okay! Alcohol and other such enjoyments were plentiful, exercise was imminent, and merriment was about to be had.

As folks arrived, they set their potluck dish inside and then proceeded to mill about socializing and merry-izing outside. Within 45 minutes or so, everyone had arrived and the hares readied themselves to dart off on XC skis. The hounds (the rest of us) were locked up in the garage with all of the windows blocked for a short while until the hares were out of sight. Once they were out of sight, we were allowed to mill about outside until the 15 minute delayed start was past. And then the trail was open!

I set out at the back of the pack, content to only finish the hash, not catch the hare. My endurance background is strong - to finish is to win!

We struck out across the valley, crossed the main road, and continued through the woods. One, two, three beer stops down. The pace was easy, life was good.

And then we arrived at the fourth stop, and it was more than beer this time. There was a shot ski and moonshine. I was pulled to the shot ski with two others and tasked with pouring my own poison. This was all well and good until the bottle sloshed me a very FULL shot glass instead of the half I'd hoped for. Oh well! Down down down.

With shot ski accomplished, we quickly realized that the second half of the pack had followed a false trail set at the shot ski. Dave, S, and another set out along another potential track to see if it would be true or false. 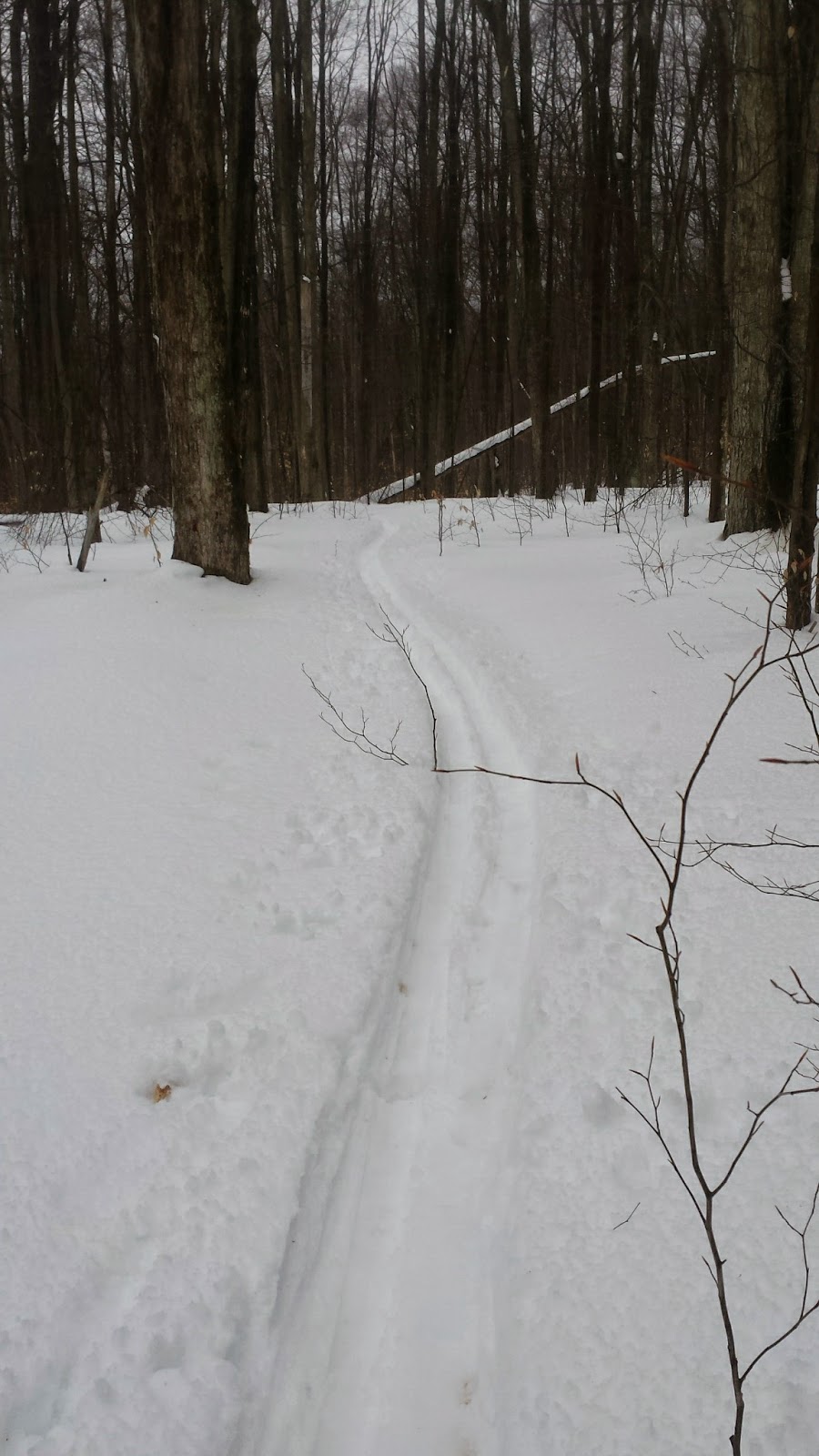 We waited a bit. And then, "ON ON!" they hollered. And we all set to climbing what ended up being a fair sized hill. Why must the climb come after the shot ski, I lamented.


Setting out anew on the true trail after the false trail mishap, I realized that I was now 4th to the front of the second pack of hashers. This motivated me to move out a bit.

I kept Dave, S, and the third guy in my sight for a time, but they slowly pulled away, moving out at a better clip than I was able. In a short time, I found myself in a pretty good bubble. No one in sight to the front or back of me.

It was nice to ski my own ski without feeling any pressure from another person. The shhh shhh shhh of my skis along the ice-encrusted snow was peaceful.

As I climbed a second hill, I could hear many voices ahead and to my left. I came to a cross roads, hesitated for a moment, uncertain, and then noticed an arrow in the snow made from twigs pointing toward the sound of the voices. Left I went, descending a slight hill and coming into sight of the whole group at a beer stop.

A few of them called to me as I approached, which of course set my inferior superior XC skiing off balance (XC is far different from downhill due to the lack of a metal edge on the ski and a lack of a plastic boot that stabilizes your ankle more). Fortunately, I saved myself from falling with some exceptional Matrix-esque flailing.

A beer was thrust in my hand as I arrived.

"They caught the hares here," someone filled me in. I grinned, nodding, not surprised based off the heckling I'd overheard prior to the hash beginning.

A large contingent of folks headed out toward the host's house as I stood catching up with folks. W, Dave, A and I decided to strike out shortly after them, leaving at least a dozen others behind who were still taking part in the merriment. 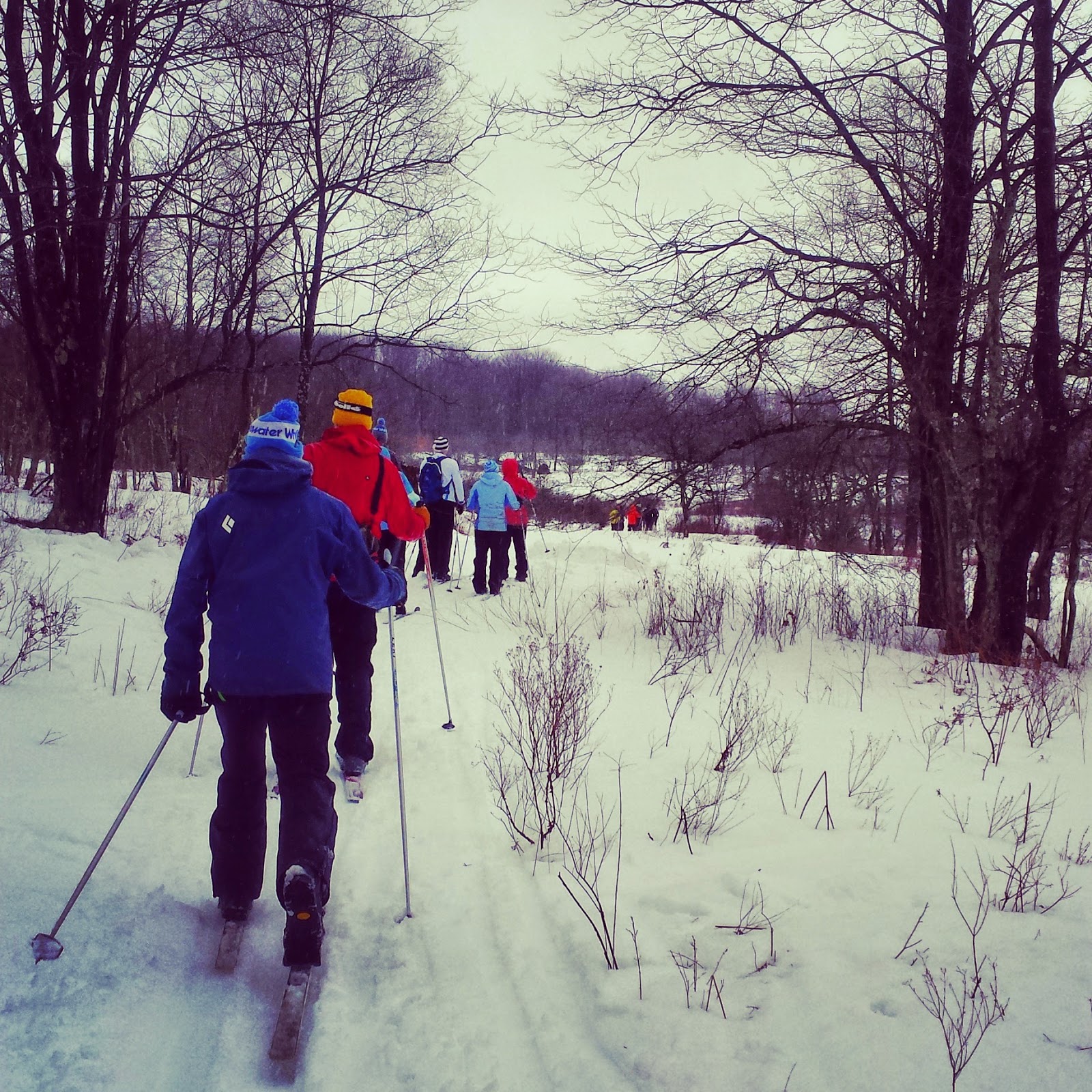 Our little quartet quickly caught the main contingent of hashers heading back. The group split up at a crossroads, but the four of us decided to stay with the main contingent. Dave and A and I paused at another beverage station, then made a short cut to catch the main group for the rest of the trek back to the host's house.

Back at the host's, I changed out of my clothes. While I'd layered properly to stay dry, I still didn't layer well to stay cool and ended up unzipping my waterproof layers to try to cool off - thus allowing the wet in. I'd planned for as much though, and was pleased to be able to change into dry clothes!

The food at the potluck was absolutely amazing. I didn't fully identify anything I ate, choosing instead to just dive in. I know how these folks can cook and knew I'd have no qualms - and I didn't! Some sort of mashed sweet potato dish, some sort of pizza thing, and the hands-down best venison I'd ever consumed made their way to my stomach along with some delicious local beers.

I plopped myself on an empty couch and was quickly surrounded by several others who had the same idea. We chatted for a time until the down-downs began. I'd been taunted warned by several, "You have to drink out of a dog bowl today!"

Because the hares had all been caught, they each drank from the bowl first amidst singing. 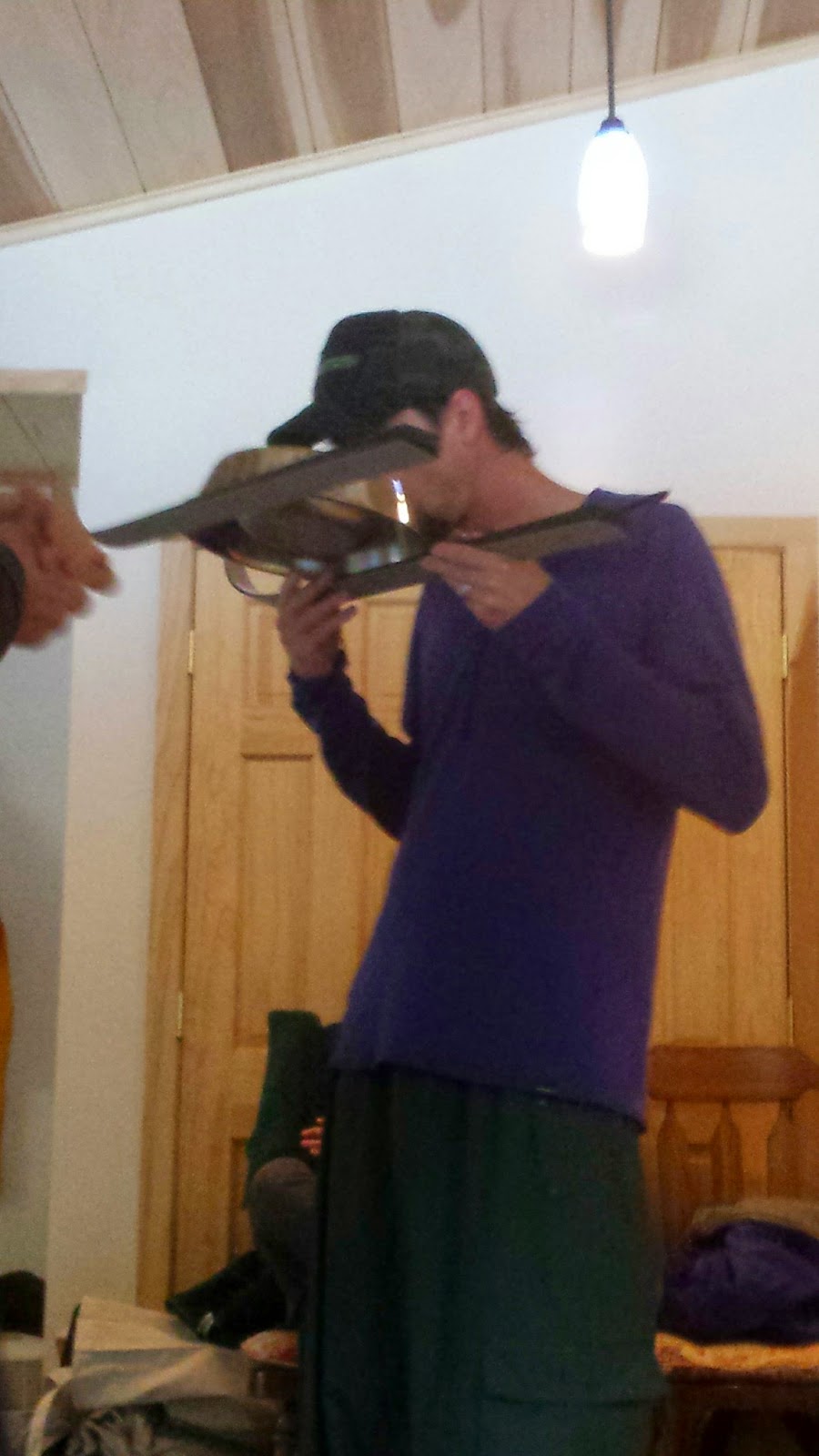 Here's to ______ (s)he's true blue
He's a hasher through and through
He's a pisspot so they say
Tried to get to heaven but he went the other way
Drink it down down down….
(if hasher takes too long) Why are we waiting (repeat until finish)

Dos, a beer, a Mexican beer,
Ray, the guy who buys me beer,
Me, the guy, he buys beer for,
Far, a long-long way to ski,
So, I think I’ve have a beer!
La, la la la la la la,
Tea, no thanks I’ll have a beer,
And that brings us back to d-down, down, down, down,
(if hasher takes too long) Why are we waiting (repeat until finish)

And then I and the two other hash virgins also were treated to the same. I definitely took the longest, but I was the only female on this day who had to drink from the bowl, so oh well. Just part of the tradition!

All in all, what a great way to spend a rainy day! I had an absolute blast.
Posted by Liz Stout at 6:21 PM